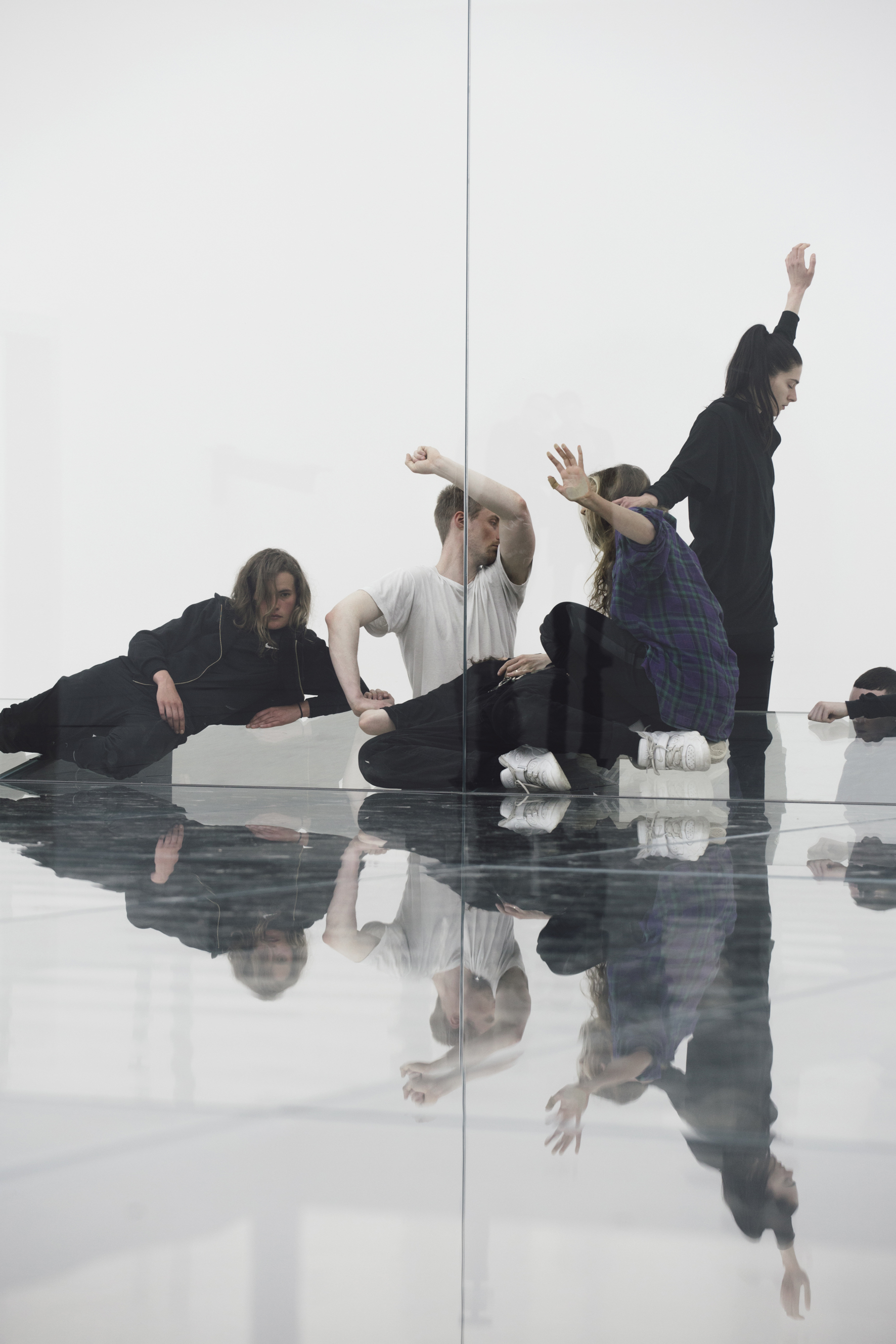 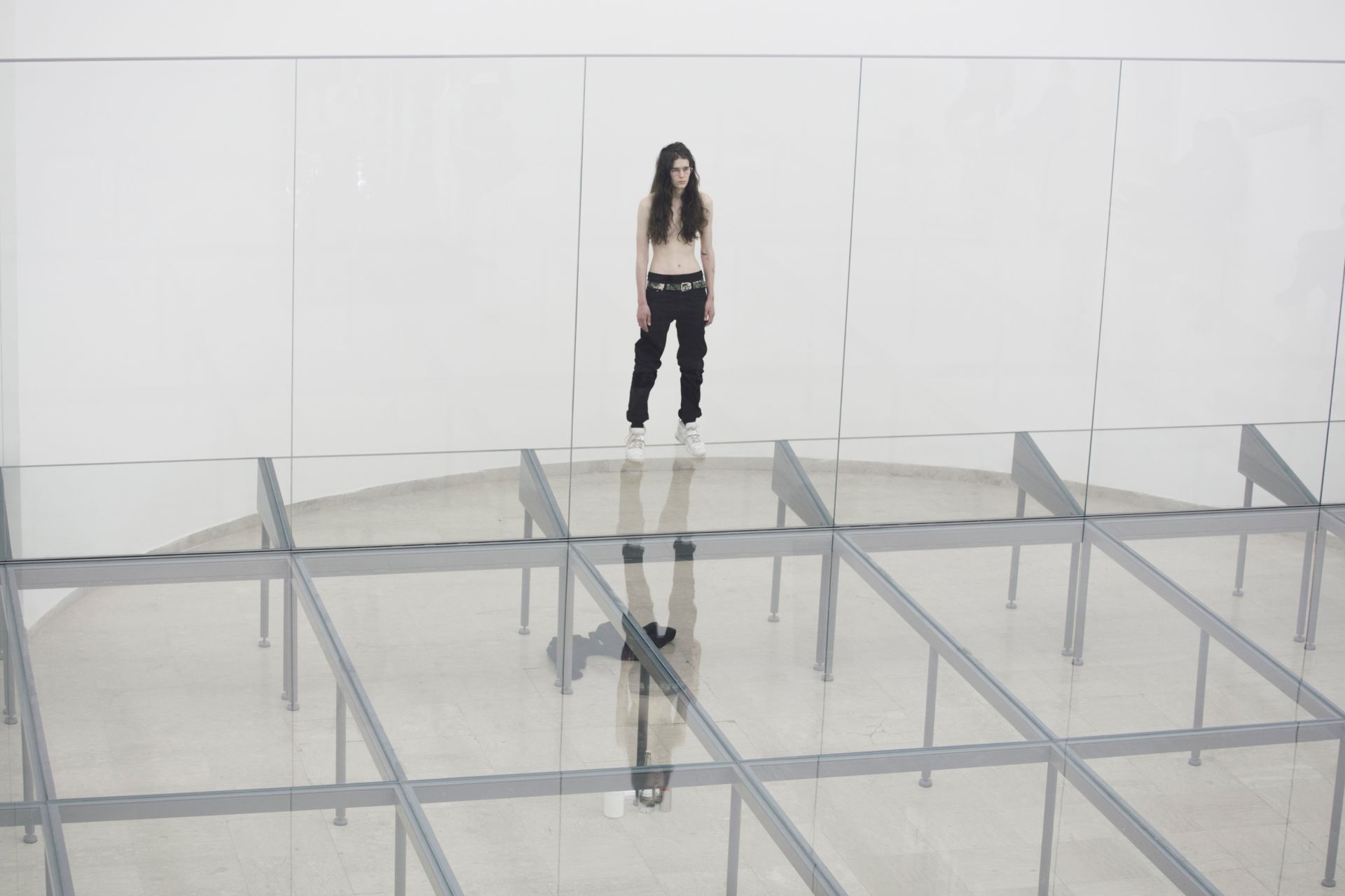 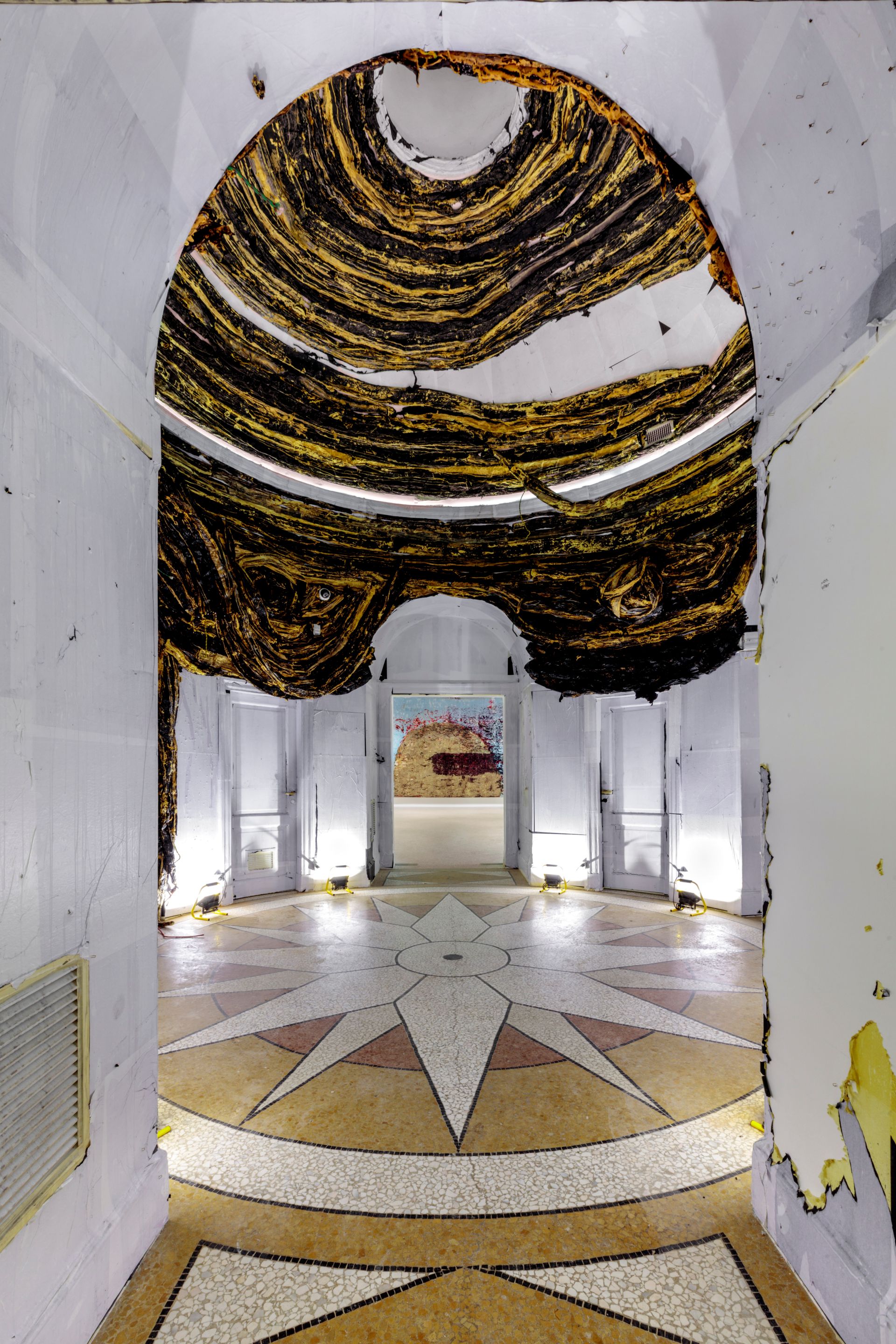 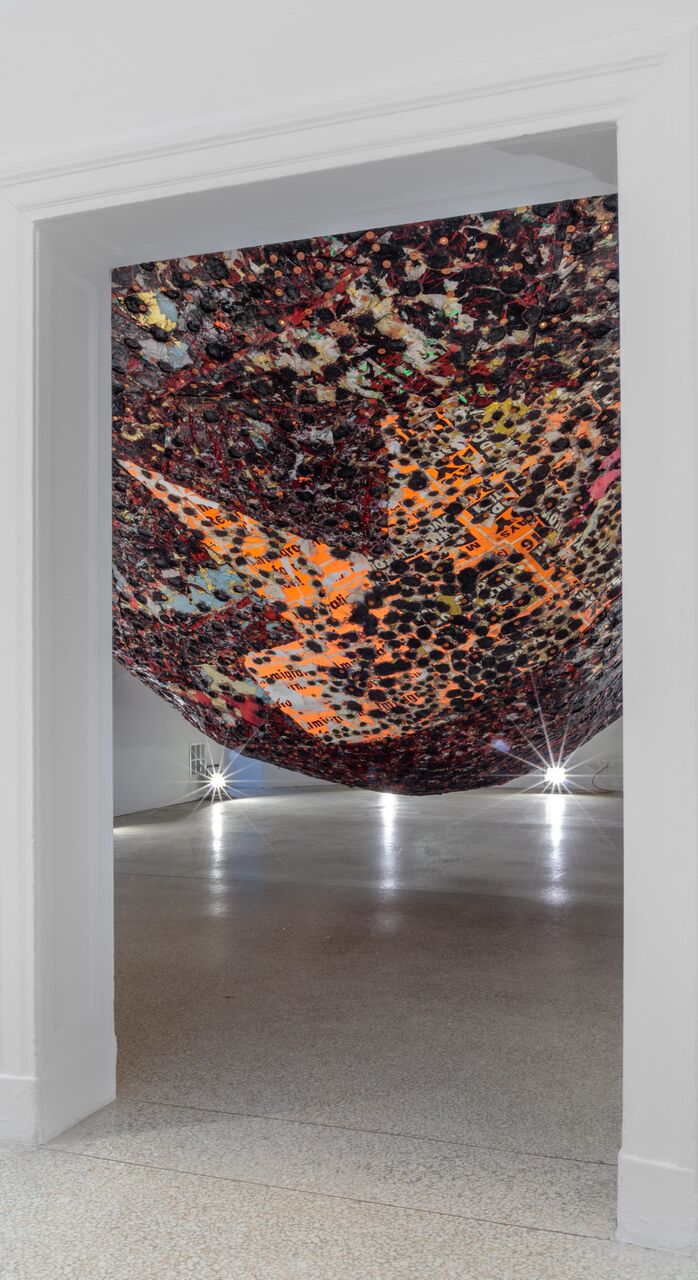 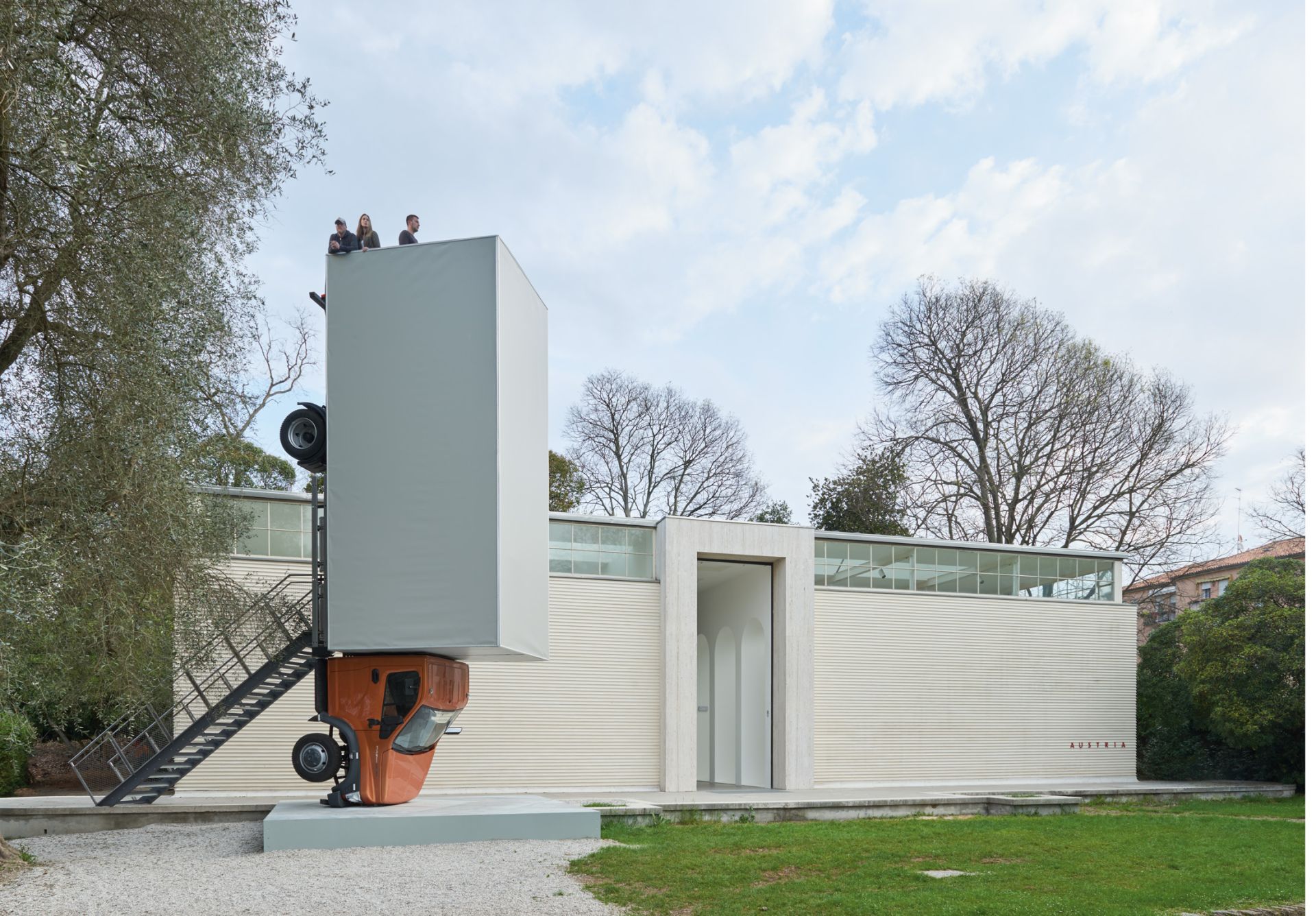 Erwin Wurm, Stand quiet and look out over the Mediterranean Sea, 2016 – 2017, at the Austrian Pavillon.
Studio Erwin Wurm 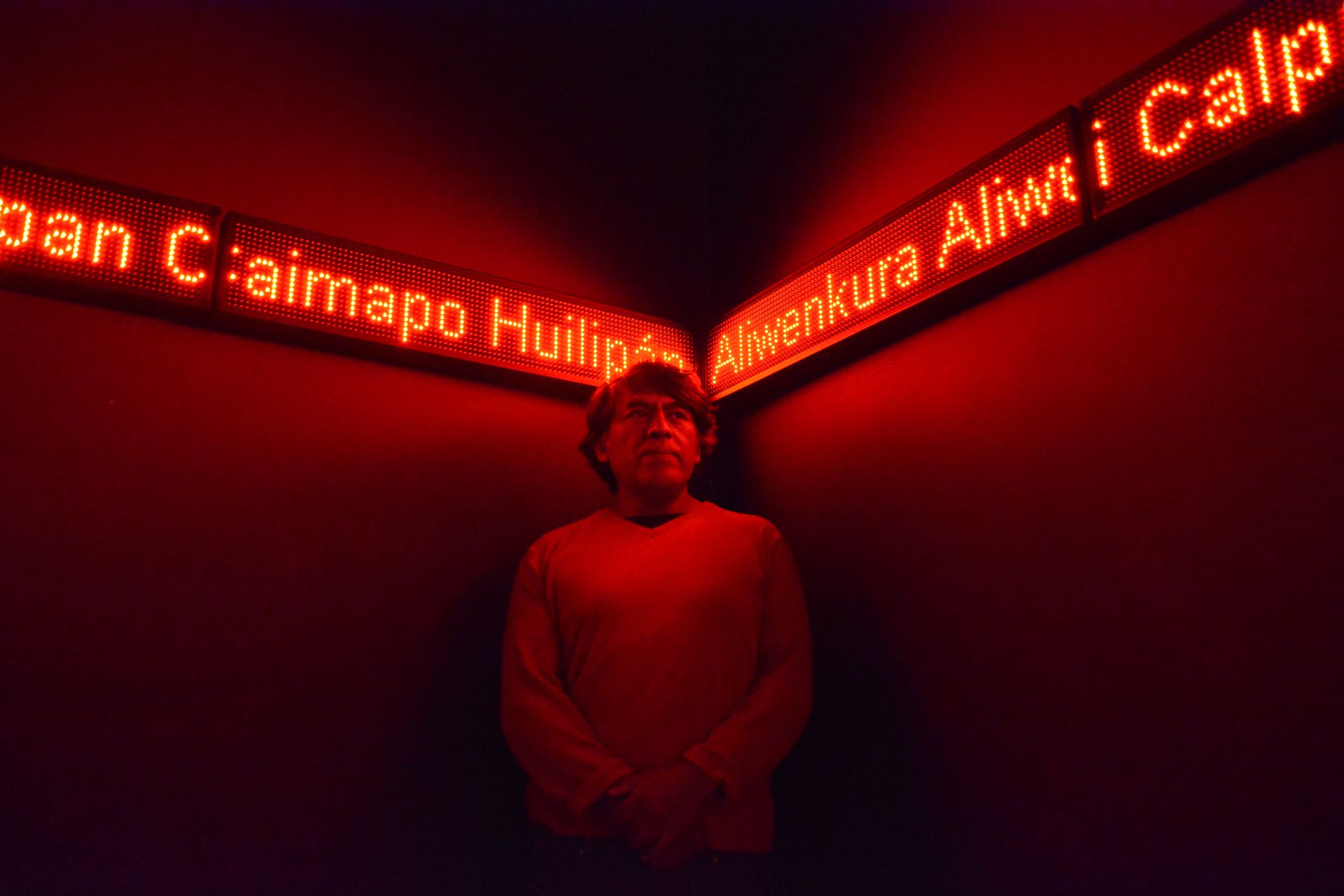 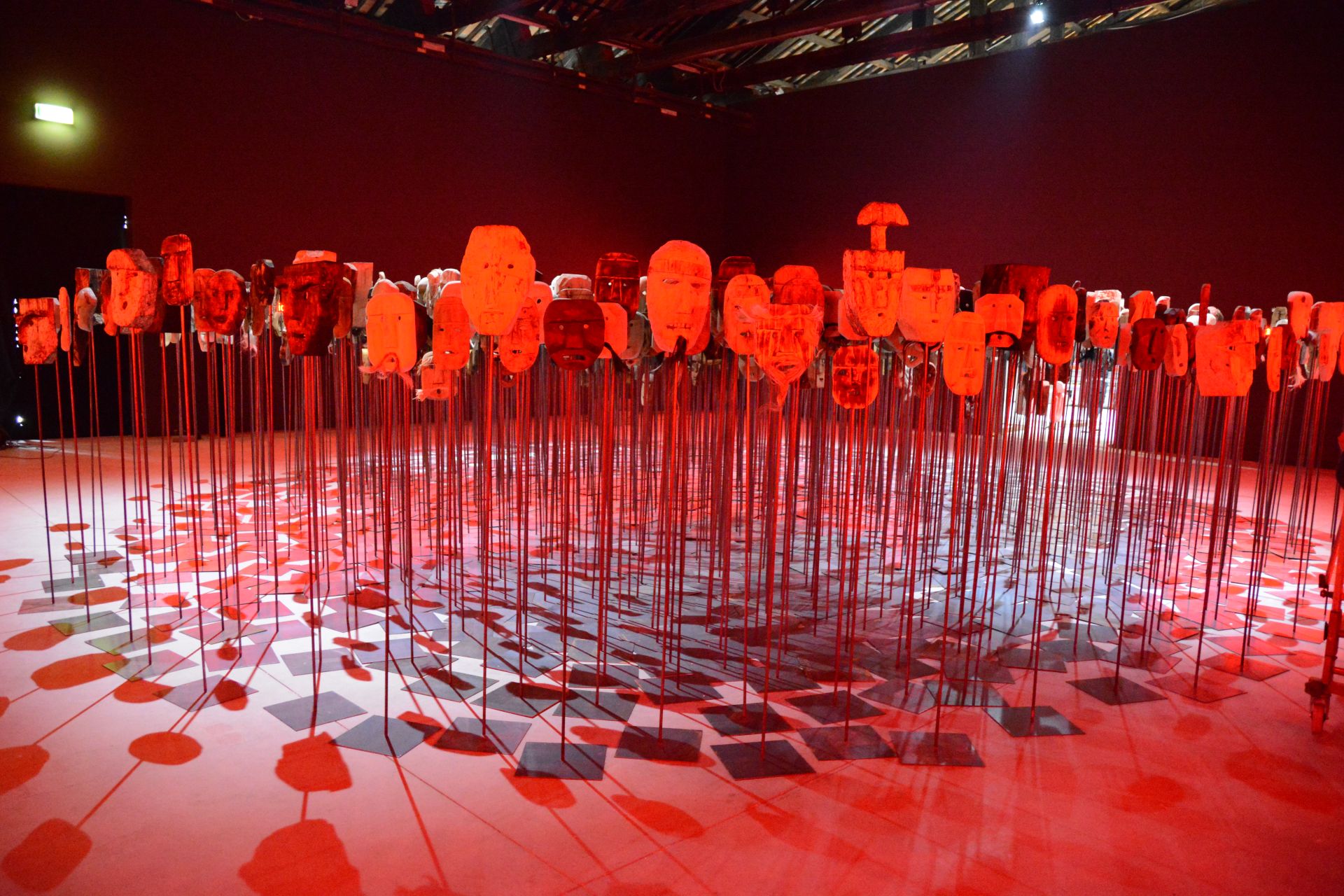 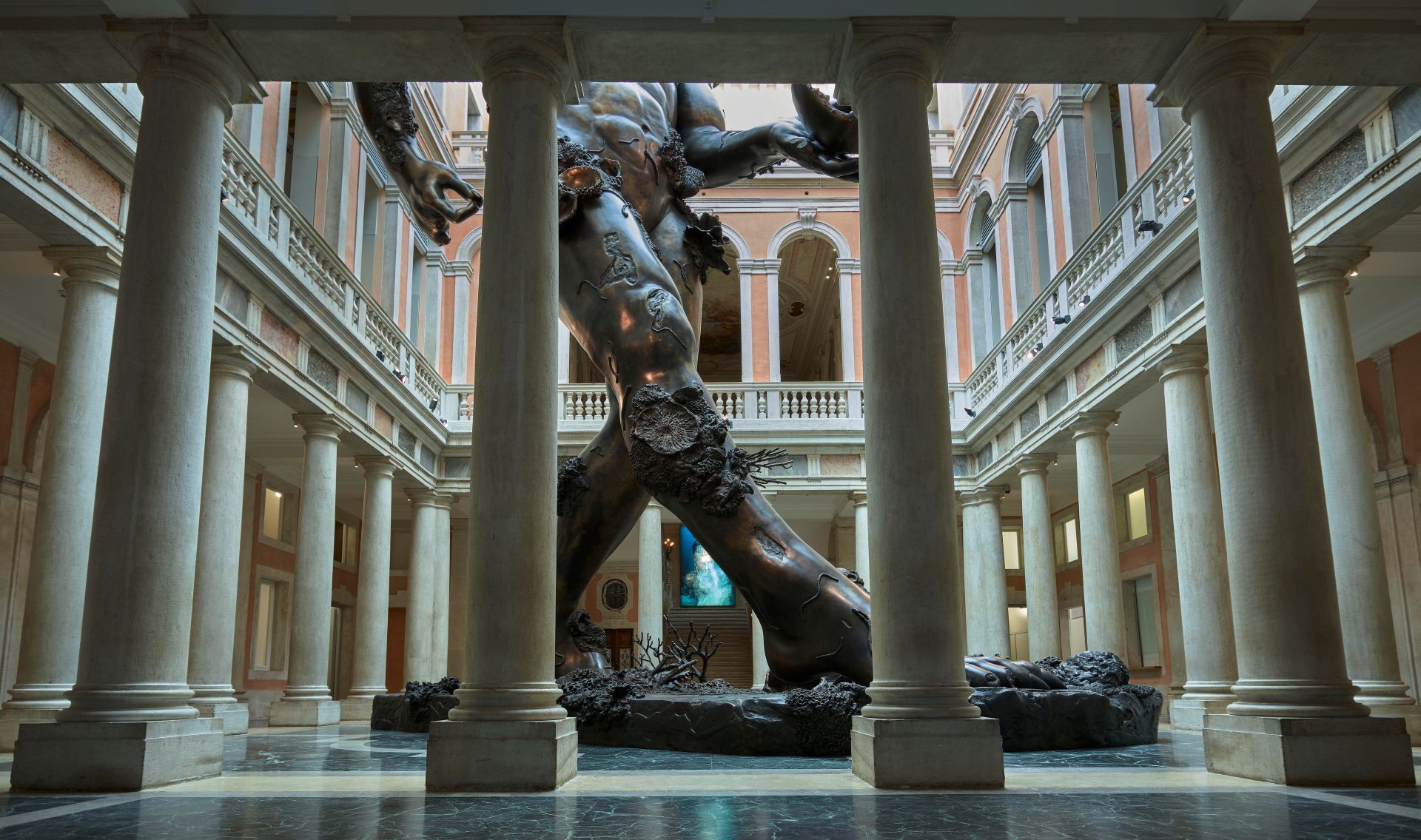 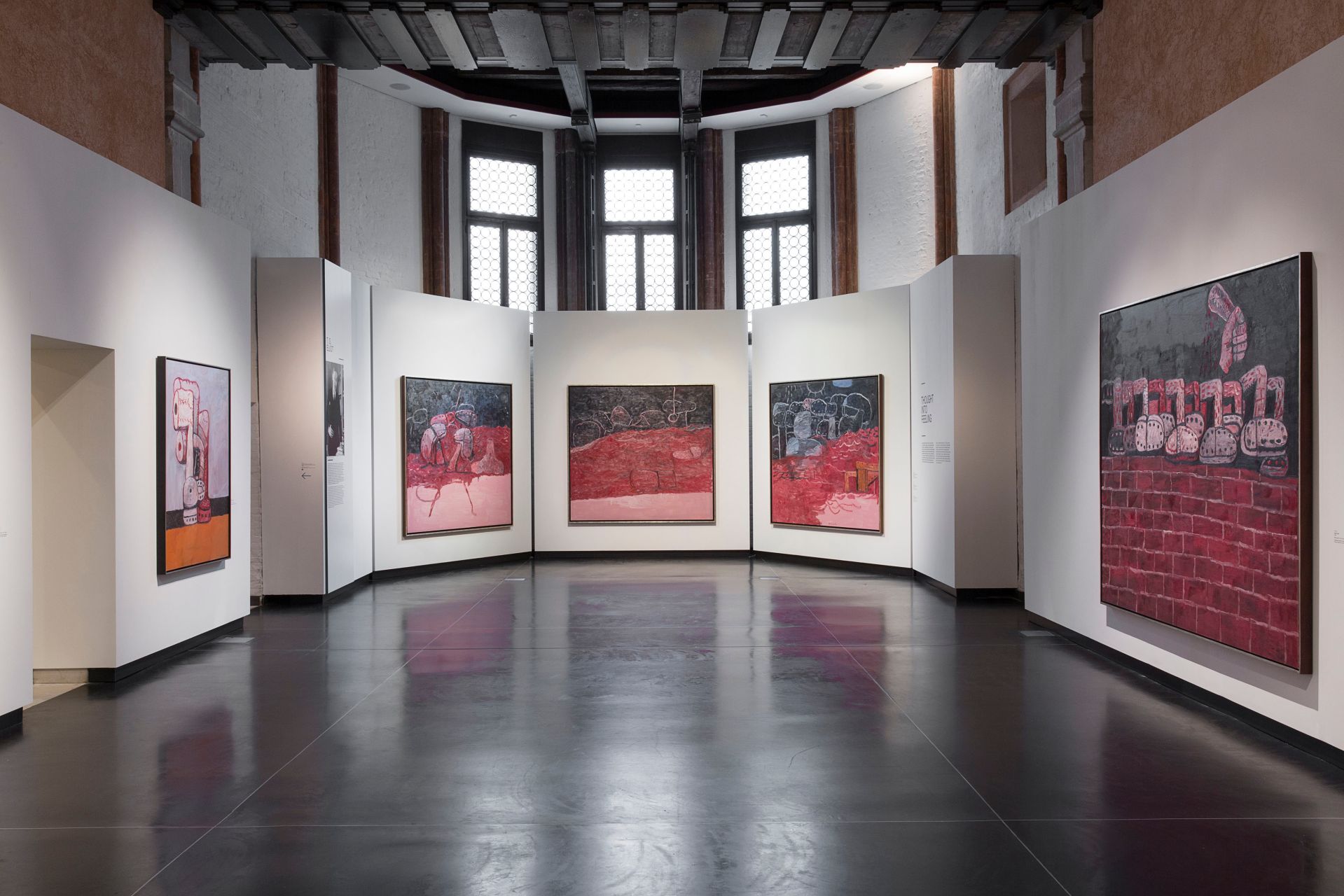 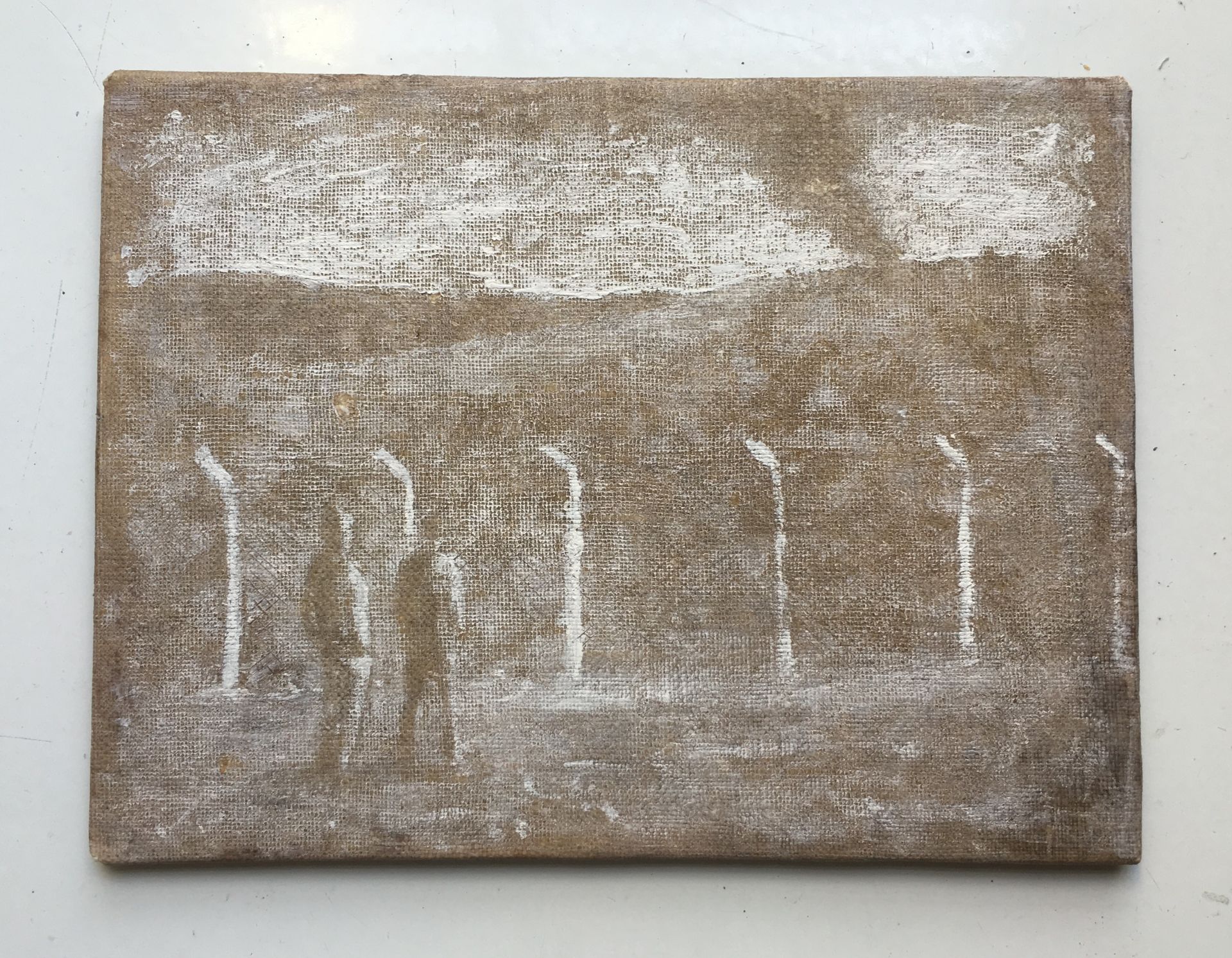 Francis Alÿs, Untitled (from the Mosulseries), 2016, at the Iraqi Pavilion.
Courtesy the artist and Ruya Foundation© Francis Alÿs
Advertisement 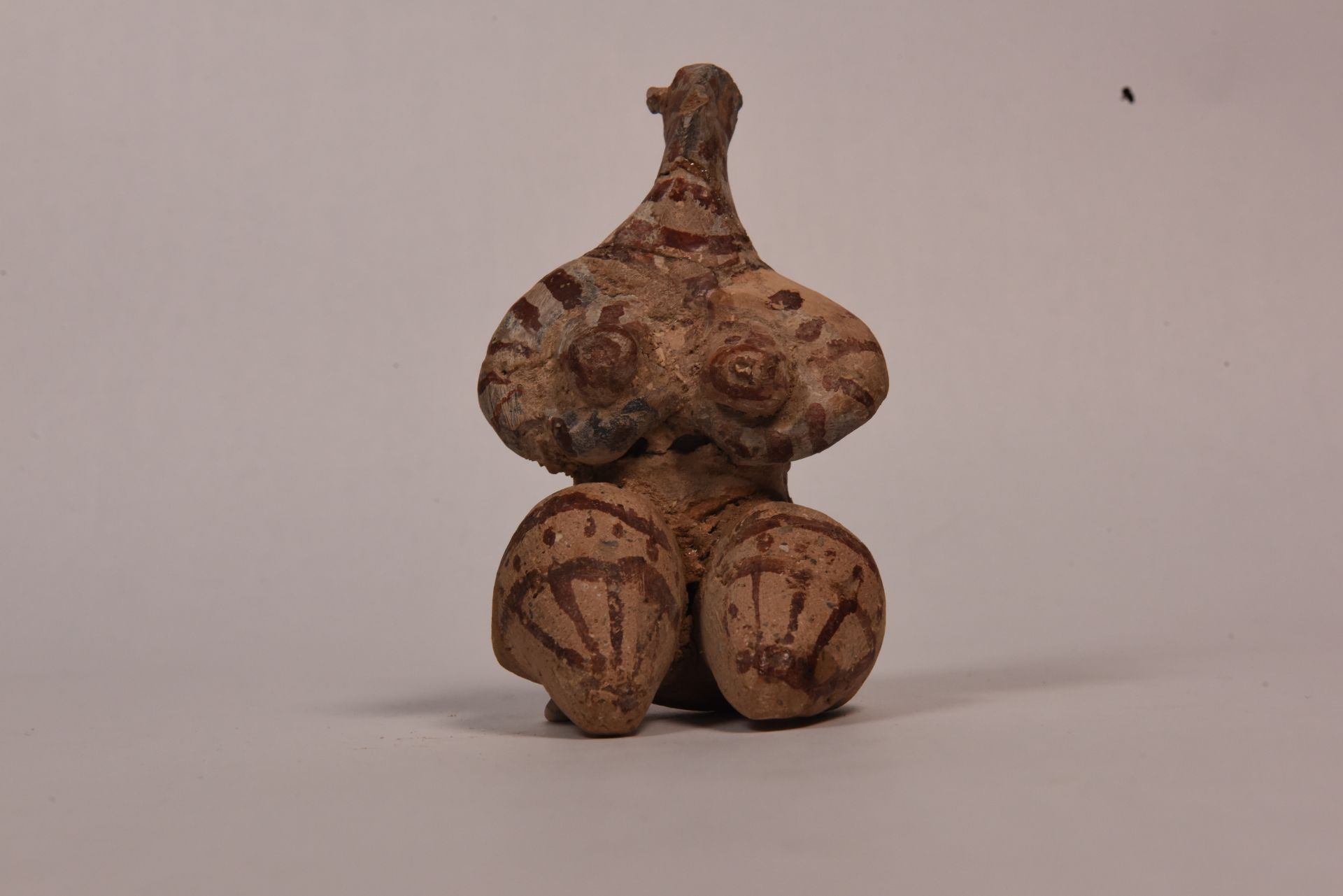 Figure, presumed to be a fertility goddess, circa 6,000 B.C., at the Iraqi Pavilion.
Courtesy Iraq Museum, Department of Antiquities;Ministry of Culture, Tourism and Antiquities;and Ruya Foundation 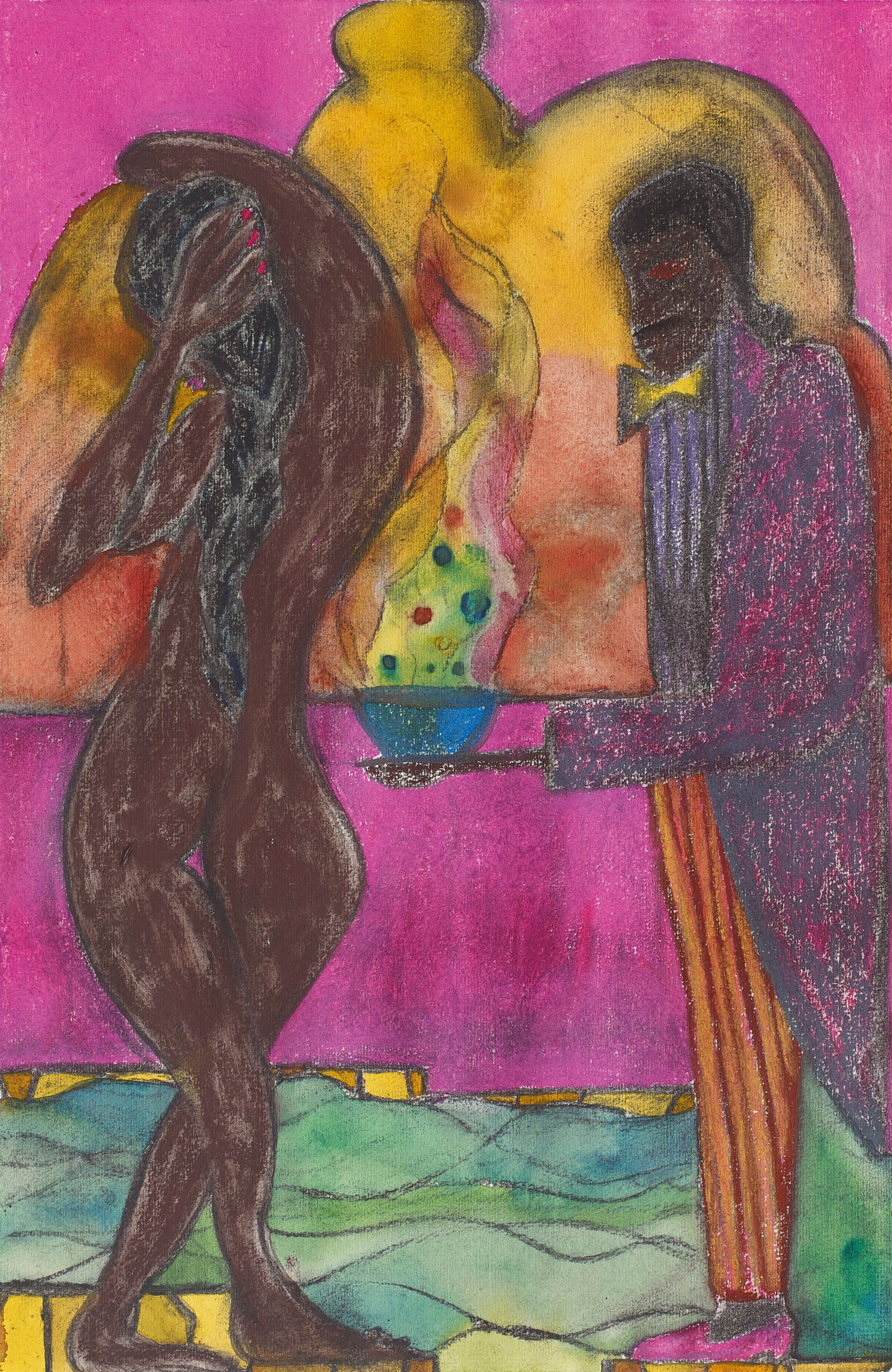 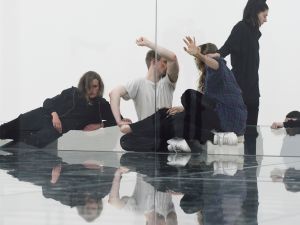 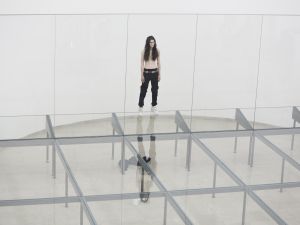 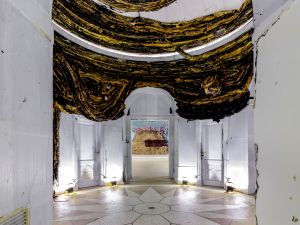 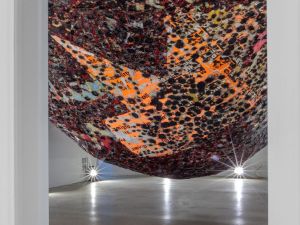 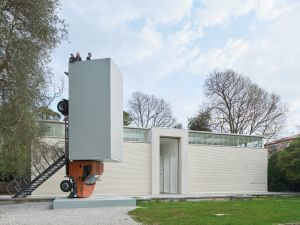 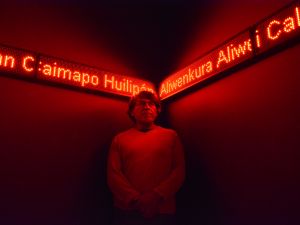 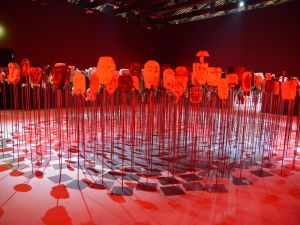 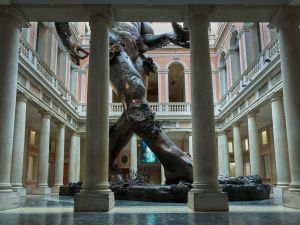 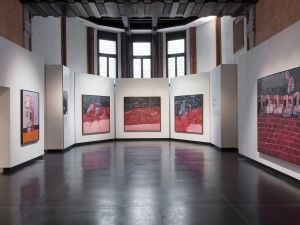 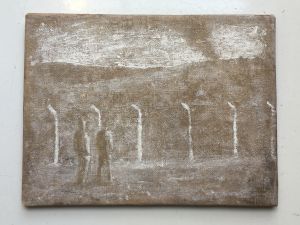 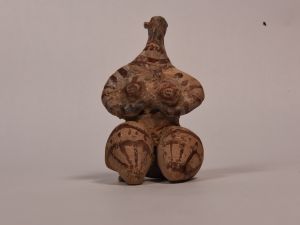 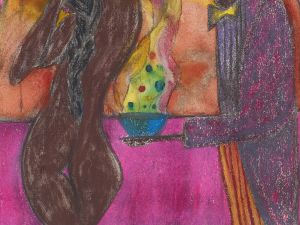 At the recently opened Venice Biennale, Germany took the top jury prize for a national pavilion. Inside the gardens where the most established countries are represented, the choreographer Anne Imhof built a stage that raised the floor of the building by several feet. The raised floor, like that of a slaughterhouse, was transparent, so standing on it and looking through the floor was dizzying.

Faust, the title of Imhof’s installation for the German pavilion, seized on the confused public’s wooziness and shook viewers hard with a performance that evoked confinement, conformity and exclusion. The transparent floor forced viewers to witness Faust’s young cast doing its best to make the audience uncomfortable—squirming in caged spaces underneath the floor, pacing defiantly, chanting over a sountrack, and staring angrily at the crowd. Looking away was not an option. On the contrary, visitors fought to get in, and the lines were long.

Over the years, politics has crept into Venice’s prestigious biennial, an event that has outgrown its role as a platform for countries to show off their leading art and artists. If this year’s Biennale was meant to be a retreat from world politics, as the Biennale’s own director, Christine Macel, had suggested when she was appointed, that wasn’t the case when I visited. The Venice Biennale has been referred to through the years as “the Olympic Games of the art world.” That’s an inflated term that even the Biennale’s marketing department might be wary of using, yet the inevitable crowds in Venice are a marketer’s dream. Still, the main events, to carry on the Olympic theme, were mostly outside the official Bienniale of more than 80 national pavilions, plus a grand exhibition curated by the Biennale and satellite events around the city.

As with the austere German Pavilion, the preferred medium in many of the pavilions in Venice was space, with several artists creating more of a stage set than a work of architecture. Where there once might have been paintings on view, now there is atmosphere; not just art, but installed habitat. So it was at the Brazilian Pavilion, where the artist Cinthia Marcelle lodged stones throughout the grill of a metal floor.

Sometimes that atmosphere was asserted itself with a thud. Even before you entered the Austrian Pavilion, you saw a truck standing vertically, as if it had been dropped or driven from above. If you entered the truck, which was hollowed out by the Austrian artist Erwin Wurm, you could mount a staircase that took you to a viewing platform. It was a good place to see if other flying objects were approaching the earth.

At the U.S. Pavilion, which showed the work of Mark Bradford, the building’s dusty facade seemed deliberately neglected. On the inside, the first room was filled by a dark sphere that seemed to have swollen beyond its two-dimensional proportions into a sculpture the size of a grotesque meteorite, which ate-up gallery space. Bradford decorated rooms of that pavilion with a dark purplish ooze, a molding that looked, well, like mold. And a room of large paintings tracked his explorations into what the pavilion’s curator called bio-abstraction.

Yet Bradford also had other things going on elsewhere. He was the founding face of the Process Colletivo, an initiative that worked with prisoners of Venice to make products and raise money. For a 300 euro donation, you could own a bag with an abstract Bradford design made of recycled materials. Not cheap, but affordable, given the inflated prices of everything in the expensive city—contemporary art included. Of course, most of what was on view at the Biennale was not for sale. The event isn’t an art fair, at least not yet. But a swarm of other exhibitions happening simultaneously gave the city the feel of a shopping bazaar.

Under grey skies, people who had journeyed to the Biennale wandered to a storefront near the Frari, one of Venice’s grand gothic churches, where Bradford signed bags and catalogs. Even Jeffrey Deitch showed up.

Big, like it or not, big got more attention. The paintings of Edi Rama, also the prime minister of Albania, looked like colorful medical illustrations as they decorated a vast white wall in the Giardini, like images of birds or royal crests. But nothing was larger than Damien Hirst’s pseudo-historical Treasures from the Wreck of the Unbelievable, at the Palazzo Grassi and the Punta della Dogana, both massive exhibition spaces owned by Francois Pinault, who also owns Christie’s auction house. It seemed fitting that everything there was for sale. A headless “bronze” cast of a standing figure stood four stories high in the central courtyard of the Palazzo Grassi on the Grand Canal. The scale of the venues gave those Pinault super-sites the feel of a Hollywood theme park, with a fantasy tale of sunken treasure from an ancient land, complete with figures constructed from resin that were meant to look like bronze that had been submerged for millennia.

Hirst’s battles with the market and the critics over the years have been the art world’s version of a tabloid saga. And Hirst was not about to be denied attention for his tongue-in-cheek archaeology, even though his “Treasures” were not was not part of the Biennale, and had seized the limelight a few weeks before.

As for actual painting, that tended to be elsewhere at separate “collateral events,” not unlike like Hirst’s, which coincided with official programs and seemed to have bigger budgets. At the Galleria dell’Accademia, where visitors usually see Old Masters, Philip Guston’s affinities with poets were explored, using mostly his later cartoonish work. By the standards of contemporary art, Guston might as well be an Old Master.

So might Alighiero Boetti, best known for his immense painted maps of the world, who had a retrospective on a museum scale at the Cini Foundation a short boat ride across from Piazza San Marco.

A film by Pierre Huyghe was on view, for free admission, in a “cultural space” on the top floor of a Louis Vuitton store on a gauntlet of Venice’s highest-priced retailers near San Marco. Louis Vuitton is owned by the collector and Pinault rival Bernard Arnault.

In a humbler space nearby, toward the Fenice Theater, works by Chris Ofili in watercolor and crayon were shown in a series called Poolside Magic—wishful thinking along the green slime of a Venetian canal. Ofili has been a contemporary art brand for so long that some might not recall his initial notoriety with paintings of the Virgin Mary adorned with dried elephant dung that showed at the 1997 Sensation exhibition of Young British Artists at The Brooklyn Museum. The institution almost lost its city funding for showing those works in 1999. But moralistic attacks were rocket fuel for Ofili’s career. Ofili’s works are currently on view at the National Gallery in London through August 28, and at the Victoria Miro Venice Gallery where they are being sold for $75,000—still affordable at today’s prices. In art, as in movie marquees, big names matter, and they sell.

Meanwhile, at the Prada Foundation’s Palazzo Corner della Regina, visitors were treated to an unexpected effect. “The Boat Is Leaking. The Captain Lied” was an update on the haunted house, a cabinet of curiosities with multiple doors to enter multiple rooms on multiple levels. Videos, still images and odd objects took you from baroque opera to the apocalypse in a palazzo transformed into a collage. It was the work of the sculptor and photographer Thomas Demand, the writer and filmmaker Alexander Kluge, and the stage designer Anna Viebrock. Satirical and deadly serious, it’s a reason to return to Venice before the show closes on November 26.

Prada scored a coup at the Biennale. More modestly, at the Iraqi Pavilion, in the third floor library of the Palazzo Cavalli-Franchetti on the Grand Canal, some 40 objects were on loan from the Iraqi National Museum in Baghdad in a show that explored the influences of objects from over the last five thousand years on artists working today. On loan were carved fertility icons and incised cylinder seals that produce exquisitely detailed miniature scenes.

Among the living artists at the Iraqi Pavilion was Belgian-born Francis Alys. Embedded in the recent siege of Mosul, Alys photographed operations there. He then made shadowy paintings using yellowish brown colors against a darker brown background, which transformed those images from journalistic to iconic.

Alys is known in the art world, and the Iraqi pavilion was co-curated by Tamara Chalabi, daughter of the late Iraqi politician and US confidant Ahmed Chalabi. At the pavilion of Chile, in the Arsenale, Venice’s old fort, the theme was anonymity.

The medium was sculpture, specifically hand-carved masks. About 1,000 of them stood on stakes around 6 feet high, clustered densely in a circle by the artist Bernardo Oyarzun. Each mask was unique—none was identified individually. Tourists who visited the Mapuche region in southern Chile and southwestern Argentina might buy one of them, yet here the masks were not decoration, but reminders of an isolated dispersed culture.

If size and celebrity mattered in Venice, a city famous for its own masks during Carnival, so did location. The back-story of the Mapuche is that they had gotten in someone else’s way. Facing the masks outward and locating them directly across the path of the visitors’ long march through the Arsenale was a reminder that, against all odds, the Mapuche were still in the way.