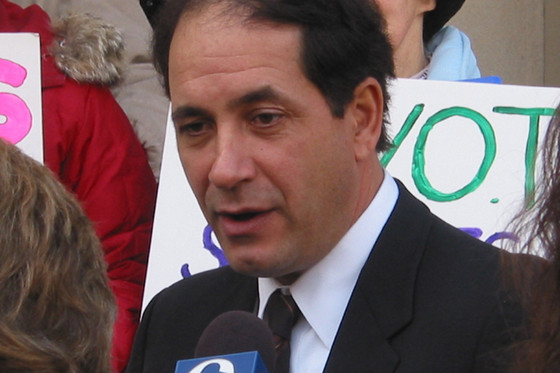 A Democratic proposal to restructure the state’s largest health insurer, Horizon Blue Cross Blue Shield, forcing it to spend down some of its surplus, has been introduced in the state Senate and could get a vote in that chamber next week.

The legislation from Sen. Joe Vitale (D-Middlesex) would make broad changes to Horizon’s governance and place new limits on the amount of money the insurer could keep in its reserve fund for contingencies.

No other private company in the state would be affected or face comparable regulatory conditions if the bill became law, and company officials have called a similar plan from Gov. Chris Christie a politically motivated abuse of power.

The effort from Vitale, the chairman of the Senate health committee, comes amid a hectic dash to lock up the state budget next week. Senate President Steve Sweeney (D-Gloucester) has announced plans to introduce a competing Horizon bill, and it’s unclear which one Democrats would prefer, if any.

Both efforts are roughly aligned with Christie’s, who has offered to approve Democrats’ plan to add $125 million in school funding to his fiscal 2018 budget proposal, so long as they give him a bill that would let him reduce Horizon’s reserve fund every year.

In exchange for the education funds, Christie also has asked for lawmakers to pass a bill — much less controversial — that would convert the state lottery into an asset of the pension system for public workers. But he has been laser-focused on Horizon all year, shaming the not-for-profit company in public every chance he gets for sitting on a $2.4 billion reserve fund and paying millions of dollars to its top executives.

Christie has urged lawmakers to let him sign legislation that would let the next governor raid Horizon’s contingency fund to the tune of roughly $300 million a year and redirect that money to state programs. A lack of revenue in New Jersey’s state budget has kept schools, pensions and charity care for hospitals depressed during Christie’s two terms, contributing to a historic run of 11 credit-rating downgrades.

Vitale said Thursday that he is hoping to get the Horizon bill through by June 30, a time frame that would give the public little opportunity to weigh in on what would be a dramatic reshaping of New Jersey’s largest health insurance company, which covers 3.8 million. Horizon officials oppose any effort to clip their reserve fund, calling it a recipe for disaster amid ongoing discussions in Congress to roll back Medicaid and reshape the health care industry nationwide.

“The Senate should be embarrassed to be playing into the governor’s shameful attack on our policyholders,” said Kevin McArdle, a Horizon spokesman.

Vitale’s bill (S4) was introduced and referred to the Senate Budget and Appropriations Committee on Thursday evening. The budget committee is meeting Monday and does not have Vitale’s bill on the agenda. But as a procedural matter, it could be added at a moment’s notice. If the legislation were approved by the budget committee Monday, the full Senate could then vote on it when it meets for the last time this fiscal year next Thursday.

A competing Horizon proposal from Sweeney had not been introduced as of Friday evening and likely would need to be approved by emergency votes — bypassing the usual legislative vetting process — if Senate Democrats decided to go with that plan instead of Vitale’s.

McArdle said Vitale’s bill would give an unfair market advantage to Horizon’s competitors.

“At 7 p.m. on a Friday night, we learn for the first time the contents of a bill that proposes radical and reckless changes for 3.8 million New Jersey policyholders,” McArdle said in a statement. “The bill contains various hidden taxes, undermines key provisions of the Affordable Care Act, allows politicians to be elected to our board, and will result in higher premiums by imposing broad requirements solely on Horizon — and not our competitors.”

He added that “the bill is designed to make Horizon an agency of the state and threatens our ability to maintain our place in the market and the decisions we make for our policyholders” and that “with Washington on the verge of a massive overhaul of health care, this is no time to be playing politics with the insurance that protects the health of nearly half the state.”

Doug Johnston, a spokesman for Hands Off Healthcare New Jersey, a campaign fighting the Horizon changes, called the Vitale plan a “disgusting abuse of legislative authority and power” that would be more at home in communist China instead of the capitalist United States.

The biggest benefactor of the Horizon restructuring would be AmeriHealth, Johnston said, a company that has been in a financial tailspin over the last few years. Cooper Health System, whose board is chaired by a prominent New Jersey Democrat, George Norcross, owns a 20 percent stake in AmeriHealth.

“It reeks of crony capitalism and it’s really disturbing that any legislator would introduce a bill that is so detrimental to one corporation at the benefit of another,” Johnston said.

“Honestly, what the hell are their complaints about Horizon Blue Cross Blue Shield?” he added. “Nobody else is providing health care in the federal marketplace established by the Affordable Care Act.”

Vitale’s bill does not mention Horizon specifically, only a “health services corporation.” Horizon is the only one in the state.

The legislation would order Horizon to perform “a charitable mission” and it would reduce the company’s ability to appoint 11 directors on its 15-member board. Instead, the company would be able to appoint eight, and three would be elected by its subscribers.

The plan also calls for a new public hearing process — to be designed and implemented by the commissioner of Banking and Insurance — meant to review Horizon’s finances annually and judge whether it kept an “efficient” surplus in the previous year.

If the Department of Banking and Insurance found that Horizon’s surplus was inefficient in a given year, the company would have 90 days to justify why the reserves were not inefficient or submit a plan to spend down what the state determined to be the excess amount.

Horizon would be allowed to spend that excess on “expanding access to affordable, quality health care for underserved individuals; responding to emerging health care issues in New Jersey; and promoting fundamental improvements in the health status of all New Jersey residents, including but not limited to substance use disorder treatment and prevention, behavioral healthcare, maternal, child and chronic health services, cancer screening, research and treatment, and improving veterans’ access to health care.”

That would be in line with Christie’s proposal, since the governor has called for the roughly $300 million he would raid from the company to be spent on drug addiction treatment. Christie’s draft legislation, however, does not include a public hearing process. The Blue Cross Blue Shield Association requires Horizon to keep reserves worth at least 550 percent what’s needed to pay all its claims. Christie’s plan is to take any funds above that threshold automatically.

Under Vitale’s bill, to meet its statutorily mandated charitable mission, Horizon would have to “fulfill its obligation as an insurer of last resort in this state.”

That’s a term of art and essentially the thrust is to compel Horizon to cover people who could not otherwise afford health care. The company operated as New Jersey’s insurer of last resort for many years, but it nearly went bankrupt in 1992, and the law was changed. When it was last an insurer of last resort, Horizon would get subsidies from competitors and tax breaks from the state that would not be afforded to it again under Vitale’s bill. Under state law, charities and benevolent institutions are typically tax-exempt, and in 2016, Horizon paid more than $200 million in state taxes.

The legislation, as part of the charitable mission requirement, would also direct Horizon to “provide affordable and accessible health insurance to subscribers; assist and support public and private health care initiatives for individuals without health insurance; promote the integration of the health care system that meets the health care needs of the residents of the state of New Jersey; and recognize an ongoing responsibility to contribute to fundamental improvements in the overall health status of all New Jersey residents.”

The bill would take effect February 2018, except for a provision that would kick in right away and require DOBI to publish Horizon’s annual financial statement online. Christie’s plan called for Horizon executives to post their compensation online, and those numbers are included on the financial statement.

Reached for comment Friday evening, Vitale said he was working on amendments to his plan.

But the whole effort could be shipwrecked in the state Assembly, where Speaker Vincent Prieto has said bluntly that lawmakers will not consider any Horizon proposal before the budget break. After the break, Prieto added, the Assembly would only consider plans that apply more widely to nonprofits, and not just Horizon.

Update (9:15 p.m.): This story has been updated with comments from Horizon and Doug Johnston of Hands Off Healthcare NJ.