A bill to restructure New Jersey’s largest health insurance company passed a key committee in the state Senate on Monday, three days after it was introduced.

The Senate Budget and Appropriations Committee voted 11-1, with one abstention, to overhaul Horizon Blue Cross Blue Shield over an outcry of opposition from company officials and supporters from across the ideological spectrum.

Gov. Chris Christie all year has demanded a bill that would let the state raid Horizon’s $2.4 billion reserve fund on an annual basis after he leaves office, and if Democrats give it to him, they say, the governor would sign off on their plan to add $125 million to his school funding proposal for fiscal 2018.

The bill from Sen. Joe Vitale (D-Middlesex) would make a series of changes, but perhaps the most significant one would be a new mechanism to force the not-for-profit company to spend down a portion of its $2.4 billion reserve fund every year that the state’s Banking and Insurance commissioner determined it had an “inefficient,” or excessive, surplus.

The bill does not specify what an inefficient surplus would be, giving the commissioner sweeping new powers over Horizon’s finances.

Vitale’s plan also directs Horizon to operate as the state’s “insurer of last resort,” which nearly drove the company to insolvency in 1992. As the insurer of last resort once again, Horizon would have a legal responsibility to cover all consumers who could not otherwise afford health coverage. And that would give a big advantage to its competitors, company officials testified.

Under Vitale’s plan (S4), the Banking and Insurance commissioner — who is appointed by the governor and Senate — would hold public hearings and collect input from Horizon officials about its surplus every year. But in the end, the commissioner alone would have the discretion to decide what constitutes an “inefficient” surplus and how Horizon should spend down any excess.

If the commissioner and Horizon can’t come to an agreement, the excess surplus would go to the state Treasury and could be spent by lawmakers.

“We think this is government overreach,” said Anthony Russo, president of the Commerce and Industry Association of New Jersey, scolding lawmakers for dictating financial terms to a private company. “I’ve had a lot of businessmen and businesswomen contacting me and asking, are they next?”

The hearing grew confrontational at times, with Senate President Steve Sweeney and Sen. Paul Sarlo, the chairman of the budget committee, pressing company officials to concede that they were planning to raise rates for consumers whether the bill passed or not.

“If enacted, S4 would impose sweeping new mandates upon Horizon alone that would fundamentally alter the way the company operates and would significantly disrupt the health insurance coverage of 3.8 million residents as well as the health care delivery systems across the state,” said Michele Jaker, Horizon’s director of government relations. “The disruption visited by S4 would only serve to compound the already chaotic legislative and regulatory environment enveloping the health care industry due to ‘repeal and replace’ activities unfolding in Washington, D.C.”

Hundreds of Horizon employees and supporters packed the state house before the vote, and the company has embarked on a vigorous PR campaign this year to fight back against Christie and Vitale’s efforts. But the budget committee was largely unmoved. Only Sen. Jennifer Beck (R-Monmouth) voted against the Horizon plan. Sen. Jeff Van Drew (D-Cape May) said he had serious concerns and abstained.

“My instinct is if you have policyholders, subscribers of health plans, that are paying premiums — whether they’re an individual, they’re a business, they’re a public entity — and they essentially overpay, that they are owed that money back, that it is not for the state of New Jersey to swoop in and decide that we’re going to use this for our pet programs,” Beck said.

Vitale, the lead sponsor of the bill and the chairman of the Senate health committee, said critics of the bill had gone overboard with their doomsday predictions.

He added, “We want Horizon to be healthy, lean, a lean machine.”

The insurance company’s chief financial officer, Dave Huber, testified that there was a real threat that the national Blue Cross Blue Shield Association would rescind Horizon’s membership if Vitale’s bill were enacted. That outcome “would be devastating for our system — it would be devastating for our members,” he said, closing off access to medical care for those who venture or retire out of state.

The bill has drawn high-profile opposition from outside New Jersey.

“Instead of being introduced and rushed through the Legislature in the final week prior to a legislative recess, S4 and any similar legislation should be deliberated thoroughly,” Richard Trumka, national president of the AFL-CIO, wrote in a letter to lawmakers.

“Raiding a company for political purposes is the kind of thing you expect in a Third World dictatorship,” Steve Forbes, the media executive and former Republican presidential candidate, said in a conference call with Horizon supporters.

The bill is now up for a vote in the full Senate on Thursday. But for all the drama in the budget committee, the Horizon proposal has gotten no traction in the state Assembly, and Speaker Vincent Prieto has ruled out posting it for a vote.

Christie on his monthly radio show on Monday night declined to discuss what he would do with the budget if he does not get a Horizon bill from lawmakers.

“I’m not going to get into negotiating on the air,” Christie said, adding that he had had a chance to review Vitale’s bill earlier. But the governor said he does not think the negotiations will end in a stalemate that shuts down the government. 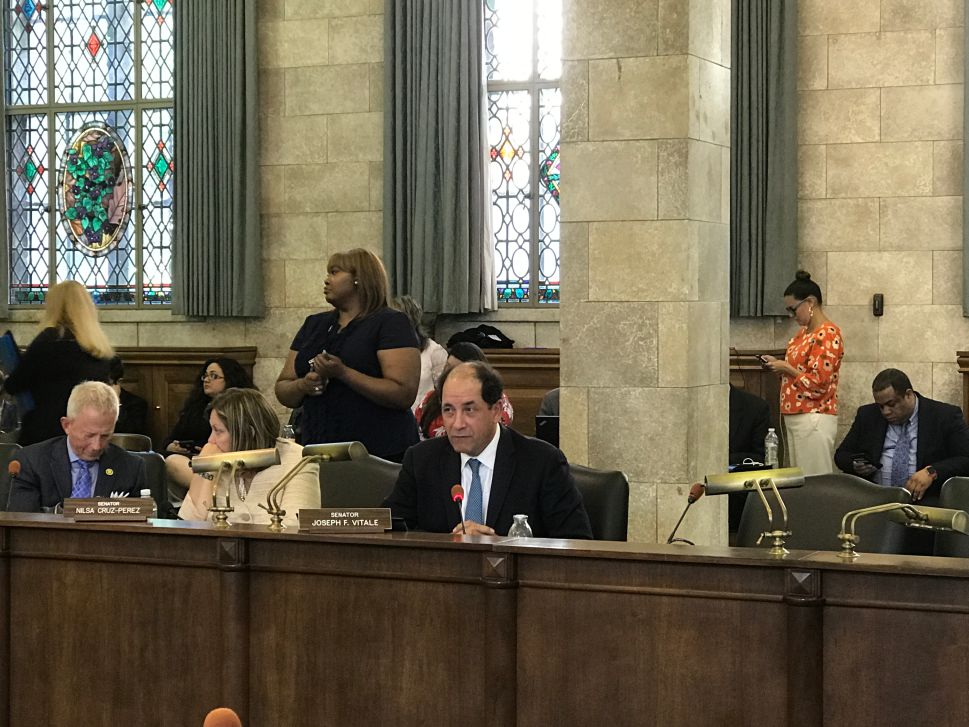