He began the race as an obscure rank-and-file lawmaker with a tongue-twisting last name.

But he had big plans. He could command a room. He exuded a calm mastery of the state’s complex budget and tax issues, explaining the nitty-gritty of state Supreme Court decisions and the vagaries of school funding to New Jersey audiences without peering at any notes, just a PowerPoint slide show with a bunch of tables and numbers.

He was funny and tough: A  guy who found out he had throat cancer shortly after announcing his entry to the governor’s race, nuked it, and then resumed his campaign. And he did not hold back criticizing the leader of his party, Gov. Chris Christie.

Assemblyman Jack Ciattarelli (R-Somerset) lost the primary for the GOP gubernatorial nomination on Tuesday to Lt. Gov. Kim Guadagno, but after a surprising and formidable campaign, more than a few Democrats and Republicans are wondering what his next move will be.

“I think he ran a pretty incredible campaign considering where he started,” said Matt Hale, political science professor at Seton Hall University. “He went up against a sitting lieutenant governor and he did quite well for himself. If he had another six months and another $500,000, I think he really could have made a dent in her lead.”

Guadagno won the primary with 47 percent of the vote to Ciattarelli’s 31 percent in a low-turnout race for Republicans. She had the lines in the most heavily Republican counties — including Bergen, Monmouth and Ocean — but Ciattarelli managed to win over other GOP strongholds such as Burlington County and his home county of Somerset. Some Democrats said that the November races would have been tougher for them with Ciattarelli at the top of the Republican ticket since, unlike Guadagno, he could not have been branded as a Christie Republican.

At an Assembly voting session last week, Ciattarelli said, “I can’t tell you the number of Democrats who came up to me and said, ‘Jack, we wish you no luck.'”

Ciattarelli at his public events would rattle off detailed plans for legislation and task forces on everything from infrastructure repairs, affordable housing, pensions and health benefits, property taxes and school funding, transportation and the Gateway tunnel. He bluntly told audiences he would raise taxes on wealthy earners and likely cut benefits for public workers — both of them efforts to round up revenue for a state that has seen 11 credit-rating downgrades under Christie after years of not keeping up with rising costs.

But he also would have begun a phase-out of the corporate business tax and the transfer inheritance tax, two of the largest sources of revenue in the $35 billion budget. He would have defrayed tax bills for residents with two homes and residents who completed home repairs. He proposed renegotiating a tax reciprocity agreement with the state of New York to fund rail upgrades.

“I’ve seen a lot of politics in Trenton and in Washington and I’ve rarely encountered anybody who’s so straightforward, who’s so thoughtful and who’d be such a great governor,” said former U.S. Rep. Dick Zimmer, a Republican, at a Ciattarelli town hall last week in Flemington.

By comparison, Guadagno stuck to a simpler message: I will give everyone a new tax credit on their property tax bill of up to $3,000.

Ciattarelli raised $526,300 for his campaign and received $1 million in matching public funds. Guadagno raised $1.1 million and got $2.2 million in matching funds. He scored primary endorsements from the Bergen Record, Star-Ledger, Philadelphia Inquirer and the New Jersey Hills chain of newspapers. He relied on a top Republican strategist, Chris Russell, and had the backing of the influential lobbyists Dale Florio and Al Gaburo.

Moments before voting in the primary on Tuesday, Ciattarelli told reporters he had “no regrets” about the race, even though it cost him his Assembly seat since New Jersey candidates cannot run for two offices at once.

Hale said Ciattarelli likely would be a “first-tier” candidate for Republicans in the 2018 U.S. Senate race against embattled Sen. Bob Menendez, who is scheduled to stand trial on corruption charges in September. Should he decide to run for president in 2020, Sen. Cory Booker would not be allowed to run for re-election to the Senate at the same time under New Jersey law. And if Guadagno loses to Democratic nominee Phil Murphy in November, Ciattarelli may have a clearer path to the Republican gubernatorial nomination in four years, Hale added.

Monmouth University pollster Patrick Murray said it was too early to make predictions about Ciattarelli’s next steps but added that the assemblyman did not burn any bridges with the state’s Republican power brokers, which positions him well for a future race.

“He is well liked across both sides of the aisle,” Murray said. “It is not like he is going out as a pariah in politics, so there is an opportunity to come back. I am sure he would be given every consideration.”

But one bridge Ciattarelli probably did burn was the one to the outgoing governor, a favorite target in speeches, debates, town halls and TV ads.

“Chris Christie in his first 24 months had three extraordinary accomplishments: 2 percent property tax cap, pension and health benefits reforms, teacher evaluation and tenure reform,” Ciattarelli said at the Flemington town hall. When he was riding high with a 78 percent approval rating, Christie should have done more, he argued.

“But he got blinded by presidential ambitions. He lost sight of what he was elected to do,” Ciattarelli said. “I don’t slight anybody for running for president, but I want you to know one thing: I’ve got but one ambition, and that’s to turn around the state of New Jersey, and if I fail in my four years, I will go off in the sunset and turn it over to somebody else.”

For his part, Christie has been dismissive and critical of Ciattarelli, calling him a “back-bencher” at two recent news conferences and telling reporters on Primary Day that he voted for his lieutenant governor.

Guadagno told reporters on Wednesday that she would “seriously consider” Ciattarelli as a running mate.

“For your faithful service to our party and to our state, I hope you will continue to serve the public as you have in good health for many years to come,” Guadagno said during her Tuesday night victory speech.

After an acrimonious primary, however, political watchers said it’s an unlikely pairing. A source close to Ciattarelli said it was unlikely that the assemblyman would consider such an offer in the improbable event that Guadagno actually made it. But Ciattarelli is likely to consider a run for office again in the coming years, and intends to fulfill his promise of bringing a new direction to the state Republican Party after Christie damaged the GOP brand, the source added.

Ciattarelli said during his concession speech that he does not plan on sitting on the sidelines this fall as Guadagno prepares to take on Murphy, a wealthy former U.S. ambassador to Germany who spent 23 years at Goldman Sachs.

“There are 40 very courageous Republicans running for state Senate this year and there are 80 very courageous individuals running for state Assembly,” Ciattarelli said during his concession speech. “We don’t have a white flag in our closet as Republicans. We are going to come out and I am going to campaign for the lieutenant governor and those 120 candidates for the state legislature in all 40 legislative districts.”

But one reality working against Ciattarelli is that, in a state where Democrats hold majorities in both houses of the Legislature and in the state’s congressional delegation, opportunities for advancement are very rare for Republicans. State Sen. Kip Bateman, a Ciattarelli supporter from his district, doesn’t plan to leave the Legislature anytime soon, and U.S. Rep. Leonard Lance, his congressman, is gearing up for what could be a tough re-election race in the 2018 midterms.

“There is not a lot of opportunity for movement within state politics but he could stay active in the party,” Hale said of Ciattarelli. “It is really about waiting for the next opportunity.” 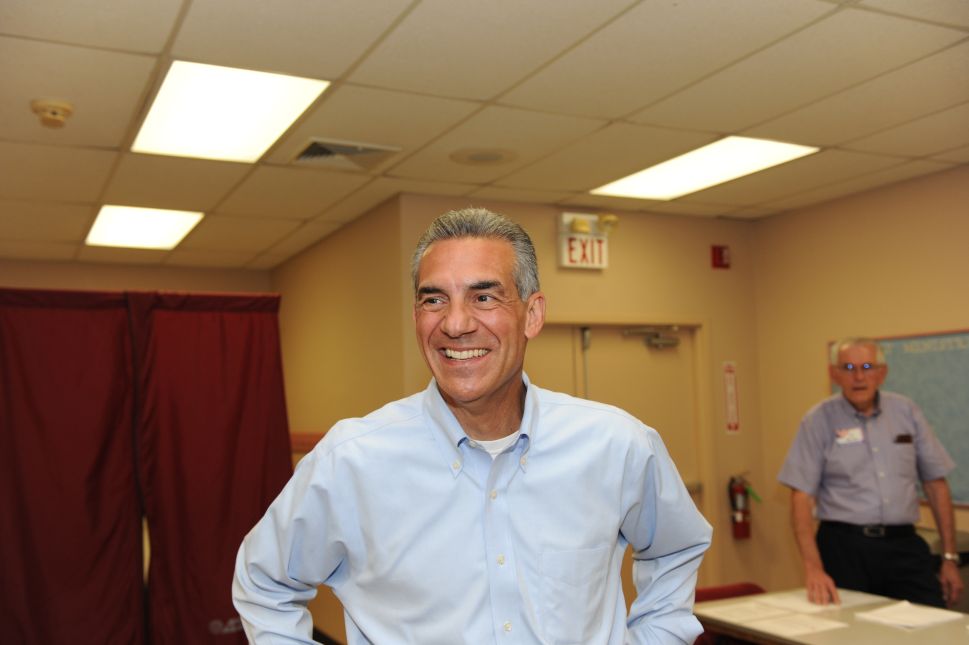