This article originally appeared on Quora: When someone makes money in the stock market, must someone else be losing money?

I have been a professional stock trader for the past decade. I found the answer to this question by accident—and it changed my life.

In sixth grade we played a stock market game. We got $10,000 to allocate to any stocks whose prices were printed in the Wall Street Journal, and after three months the allocation that had produced the greatest profit would win the game. I wanted to win, so I asked the teacher why stock prices would rise. “Because people are buying them.” And why do they buy them? “Because the prices might rise, and then they would profit.” The vicious circle in this explanation models stock market participation as a zero-sum game. That is to say, any profit I make comes straight out of somebody else’s pocket. Legalized gambling.

Of course, I didn’t buy that this was all there was to tell of the story. If most all the big companies in the world were on board, as well as all the pension funds and insurance companies, I knew there had to be something more. So every time I met someone who seemed to be smart and knew something about business, I would ask this question. I don’t know if they simply didn’t have a good grasp of the truth or if they were just trying to dumb down the answer for a teenager, but every MBA I spoke with gave me this same zero-sum-game tale. I started to think that business was for people who were singularly not-smart.

During my final semester as an undergrad I was a regular at a bar on campus. I was there every Monday evening after a late class, doing a bit of drinking and a bit of reading. An economics professor sat next to me at the bar, also winding down from the day. He was a fascinating fellow, and we discussed everything from philosophy and religion to travel and wine to family and careers. After building up sufficient respect for the man, I began to have a thought. If anyone can explain it to me, I thought, this guy can.

With great trepidation I asked the familiar question: “Why would someone buy a stock?”

But the familiar answer didn’t come back.

Oh. This time really was different.

“Both of us are at this bar every week. We like it. It improves our lives. And we pay money to the bar that, if the bar’s business works well, creates profit for the owner.”

That sounds right. In fact, it makes profit sound like a great thing for society, at least in some circumstances.

“But when it comes to starting a business, it takes money to make money. The owner had to commit to a lease on this building, bought glassware and alcohol, installed stools and this lovely wooden bar in front of us, and hired employees. Most people with a passion to start a small business aren’t sitting on cold, hard cash. They have to get it from somewhere.”

This is making sense, but where does the stock market come in?

“I happen to know the owner here, and he went with a combination of two options. One, he got a loan from the bank. But he didn’t want to be on the hook for too much if the bar failed, and besides, the bank wouldn’t lend him much unless he had skin in the game. So he brought in an investor. The second partner put in some money, and the guy you and I know puts in the work.”

There’s that light bulb poking out.

“The two partners divide up both the assets and the cash flow proportionally to the amount of the bar that each of them owns. In other words, they split up the profits from the ordinary operations of the bar, as well as ownership of the furniture and liquor and so on in case they decide to sell any of it off, based on how much each partner owns. Similarly, if they sell the bar one day, after they pay off the bar’s debts, they will split up the proceeds.”

Time to flip the switch.

“Owning stock is like being that partner. You have a claim to all of the profits and assets of the business after its debts and so forth are paid. The business can build its earning power, accumulate assets, and become an attractive candidate for bigger businesses to buy up, and in all of those cases your stock in the company can put profits in your pocket. People buy stock to participate in those profit opportunities, and the price increases as people think that the potential profits are worth more.”

But the investor dealt directly with the guy who runs the company. On the stock market we don’t buy shares straight from the company, do we?

“The company gets cash directly whenever it offers new stock. Investment banks help it place that new stock with investors. But the people who own stock may want to sell it, which is where the secondary market comes in. That’s where Mom & Pop and mutual funds and so on all meet up to buy and sell the stock that has already been issued. It’s just the same as if the investor in this bar sold his stake in the bar to somebody else.”

Now we bring it home.

“You buy stock to get a claim on the business, and you sell when you are willing to give up that claim in exchange for cash. When people think the stock will produce greater value than the cash they’re sitting on, and they act on that conviction by buying up stock, the price of the stock rises. And vice-versa with selling.”

At this point we can answer the question robustly:

Imagine the bar’s investor put in $150k originally and got 50% of the bar. Say he owns it for ten years, and the business is really successful during that time. For one, he’s pulling out profits, so he’s probably already gotten more than his $150k back — if he sells his part of the bar, anything he gets is pure profit. For another, the bar has probably built up some assets during that time. It might have bought the building it’s in, and his part of the building may now be worth more than his original investment.

So not only has he been paid back through cash distributions, but his ownership stake has increased in hard value because of the equity they’ve got in the building. No matter where he sells it he profits, and in fact he may well sell it for more than he put in originally.

And there’s no reason to think the next investor can’t profit, too. If the bar just keeps pace the cash distributions will keep coming and the bar will eventually own the building outright. Or maybe they expand, add food service, or open a second location, and their profits increase. Everyone can keep seeing their money increase over and over, so long as the business keeps succeeding.

It’s the same with the stock market. So long as the businesses keep succeeding, stocks can keep increasing in value without anybody losing that money. The profits in your pocket come ultimately not from the losses of other market participants but from the value created by the companies. Yes, other market participants may not make as much profit as they otherwise might — that’s where your profit comes in — but that’s a loss of opportunity, not a loss of cash. Companies get capital (cash) to fund their business plans. Investors get to participate in their business success. It really can be a win-win.

What are some common tell-tale indicators that the time has come to sell a stock?
What could catalyze the decline and/or end of high frequency trading?
Is it true that a salesperson makes the worst CEO?

John Roberson is an entrepreneur, stock trader, and financial problem-solver living in Austin, TX. John is also a Quora contributor. You can follow Quora on Twitter, Facebook, and Google+. 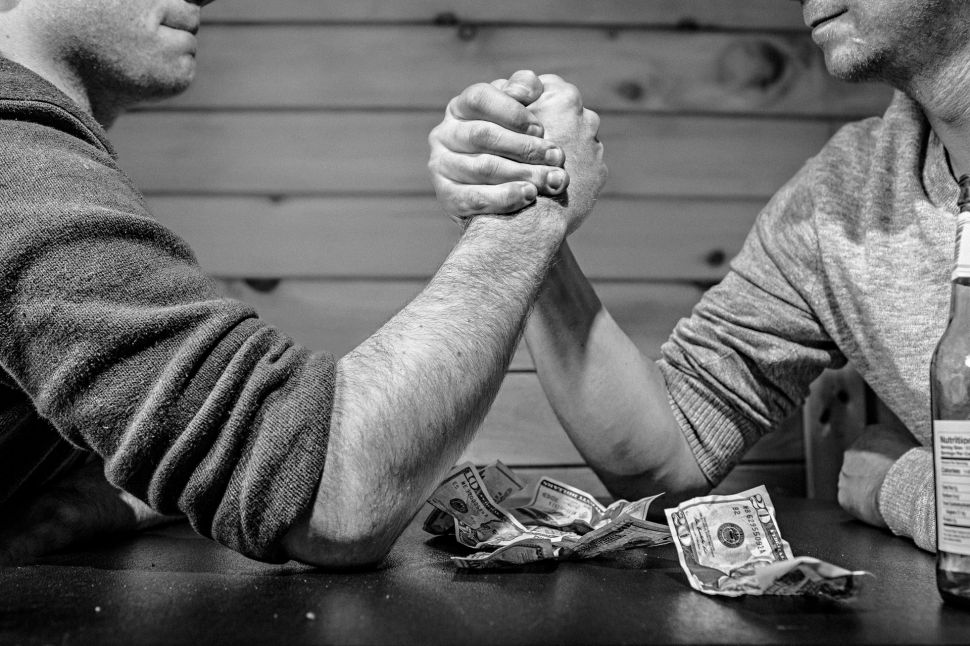