It’s tough to find a subject more polarizing than marijuana legalization. Yet for all the fearmongering and cannaphobia, this business could be just what the American economy needs for longstanding revitalization.

The trick will be to take away the apprehension and move us toward a climate of collective acceptance. Half the country already gives individuals access to medical marijuana, and eight states allow for its recreational use. In Colorado, the revenue is hovering around $1 billion, and across the nation marijuana sales should approach $22 billion in three years. And it’s all legal.

So what’s holding us back from embracing this emerging marketplace that could completely galvanize our workforce and be a boon to entrepreneurs in the cannabis space? In a nutshell: hype.

If you paid attention only to politicians like Attorney General Jeff Sessions, you would think that the only people taking, manufacturing, or investing in cannabis are, as our president would say, “losers.” Sessions notoriously noted that marijuana users can’t be “good,” illustrating just how tough it is to get a basic discussion started about this plant.

It isn’t the fault of the current administration and its elected officials, though, as cannabis has been a stigmatized drug for more than half a century. Despite proof that it’s less toxic than alcohol or tobacco — both of which can be purchased anywhere with an ID — it’s been labeled a gateway drug to narcotics like heroin. What gets lost in the shuffle is the litany of medical benefits it has and that it’s been accepted in most of the country.

The overall goal is a lofty one: Get people to talk about the positive aspects of cannabis and rid themselves of misinformation. And if the recent cannabis stock index — which exploded by 236 percent last year — is any indication, they’re starting to get the message.

How a Naturally Occurring Plant Could Avert Recession

The cannabis industry is a multibillion-dollar business opportunity, and entrepreneurs who want to earn money and produce valuable goods need to sit up and take notice. Unfortunately, those looking to dip a toe in will face several immediate challenges.

The first threat comes from the federal government, which categorizes cannabis as an illegal substance. Even in states where cannabis is legalized, such as Colorado and California, federal law supersedes state law, keeping outside investors and federal banks from funding or opening accounts with cannabis businesses.

Without the ability to obtain funding or manage their cash, those entrepreneurs remain strapped for seed monies. Even bankruptcy courts turn a blind eye to legal (state-wise) cannabis companies; the bankruptcy courts, after all, operate under federal jurisdiction. And if an entrepreneur gets desperate when searching for cannabis industry real estate funding and goes to a hard-money lender? He’s likely to pay up to 18 percent in interest.

Then there are tobacco giants like Marlboro that have the resources to mass-market cannabis to a budding consumer base and hinder early-growth companies. Big Tobacco corporations know that smoking is down 21 percent in the past 10 years, so if they can (legally) recoup their losses in cannabis, they will.

Despite these threats, some founders are willing to brush off worries and dive into a cannabis marketplace. They’ll be poised to profit if they keep a few factors in mind:

Dire predictions aside, some cannabis companies are making it big time, including LeafLine and Eaze Solutions. Their journeys should be analyzed by would-be startups.

LeafLine is a Minnesota-based indoor farm dedicated to providing marijuana to state patients who need medical treatment. Similar farms focused on the cultivation and harvesting of cannabis could be built throughout the country, providing agricultural stimuli and growth. Each farm will take adequate time to establish itself, giving vast, long-term earning opportunities to workers.

Eaze Solutions delivers marijuana to its customers, similar to the concept of an Uber or Lyft. The startup, which just secured a record $13 million in Series B funding, is constantly adding to its corporate employment, as well as increasing its drivers.

Throughout Southern California and the Bay Area, it has gained a strong following and continues to reap the advantages of being the sole competitor in its space. No doubt imitators will follow, upping the workload and paydays.

2. Cannabis industries that get federal assistance will generate national revenue.

All signs point to cannabis being legalized on the federal level at some point. When that happens, we’ll see a domino effect across the country as this cash crop explodes and provides a new stream of tax dollars to support communities and basic infrastructure. From that point, peripheral marijuana industry startups like LEAF will pop up.

LEAF is a smart, self-contained, single-purpose grow chamber for food, herbs, or marijuana. Meant for home use, it’s similar to a small refrigerator and sells for $3,000. Over time, similar entrepreneurial ventures will come up with other equipment to make cannabis growth and use safer and more convenient.

According the United States Department of Justice, about 12 to13 percent of U.S. prisoners are serving for marijuana-related offenses. When we decriminalize marijuana, we simultaneously take the burden off taxpayers to the tune of about $20 billion annually. Plus, the prisons will be less crowded.

Although it might be tough to start the conversation about cannabis, it’s one we need to have among entrepreneurial groups and with government officials. Instead of treating the subject as taboo, our objective should be to proactively open the floodgates and enable this industry to bring us back to pre-2008 recession economic levels and beyond. 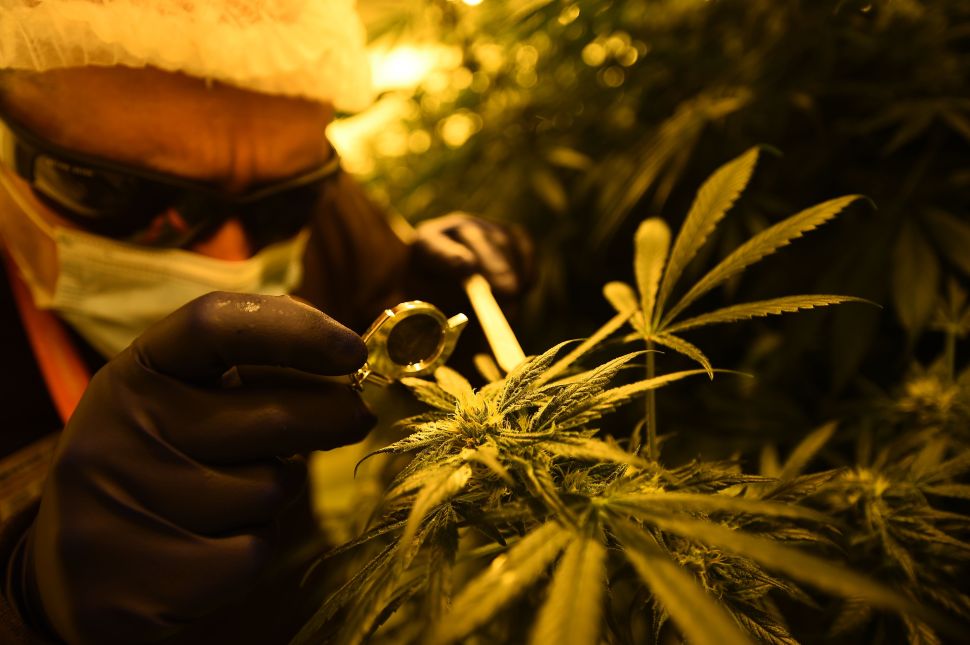