Buzz Aldrin’s life and name is ubiquitous within the world and history of space exploration. Aldrin became one of the first humans to walk on another world when he exited the Lunar landing module during the Apollo 11 mission. Since then, he’s been in the public eye advocating and defending space travel through many channels that include film, television and even the music industry.

Here are 11 things we love about Buzz Aldrin:

Aldrin does not miss an opportunity to show his pride and patriotism during the holidays. He’s outspoken about his support for military veterans and what they’ve sacrificed for this country. Just yesterday, Aldrin celebrated July 4th with a star-spangled outfit.

Before Buzz Aldrin would pilot the Apollo lander module on mankind’s greatest mission, he was a West Point graduate who would fight in the Korean War. As a Second Lieutenant in the United States Air Force, he served as fighter pilot who flew 66 combat missions and famously shot down two Soviet-built MiG-15 Korean fighter jets.

3. He was the first human to use the bathroom on the Moon or anywhere but Earth for that matter.

Hey, when you gotta go, you gotta go right?  On July 20th 1969, Aldrin took the first giant leak for mankind. Don’t worry, he didn’t unzip or anything. Just went right in his cool space suit. We do wonder who was the first to take a dump on the moon but some things should just be left unknown.

When the Observer first started reporting from inside NASA two years ago, agency staffers gave us a valuable piece of advice: Don’t ever talk about Buzz Aldrin being the second man on the moon in front of him. He hates it. Michael Collins, the Apollo Command Module pilot who didn’t reach the moon’s surface, once said Aldrin “resents not being first on the moon more than he appreciates being second.” NASA originally planned for him to take those first epic steps but Neil Armstrong’s position inside the Lunar lander made it easier for him to step out first. There’s also the fact that Armstrong was the mission’s commander. Admit it, you would be salty too.

5. He wants humans to walk on Mars.

“Get your ass to Mars” is his slogan to advocate for a human mission to our neighboring red planet. In 2013, he published an oped in the New York Times titled The Call of Mars arguing that “now I see the Moon in a far different light—not as a destination but more a point of departure, one that places humankind on a trajectory to homestead Mars and become a two-planet species. It is time to lay the groundwork for effective global human exploration of space.” Aldrin also published a book titled Mission to Mars and is regularly vocal about the endeavor on his social media accounts.

6. He once epically schooled the US Senate on space exploration.

“It’s an integrated plan that knits together returning to the moon on a commercial and international basis, leveraging asteroid rendezvous, and settling Mars on a carefully developed risk-mitigation architecture,” said Buzz Aldrin during a Senate hearing. “It includes the use of a robotic cycler between Mars and Earth that will revolutionize the economics and safety aspects of human missions to Mars.” The hearing was held in February of 2015 to discuss NASA’s exploration budget.

7. He started a nonprofit dedicated to STEM outreach.

Aldrin started the ShareSpace foundation to originally advocate for space tourism but it has evolved into an educational resource platform to get young people excited about space. “ShareSpace is a nonprofit organization dedicated to inspiring children’s passions for science, technology, engineering, arts and math by providing innovative, interactive educational tools to educators across the country at no cost,” says a statement on the organization’s website.

8. He once punched a conspiracy theorist in the face.

Leading crackpot and proponent of the moon landing hoax conspiracy theory, Bart Sibrel, once tricked Aldrin into appearing at an event under false pretenses and confronted him on the subject. With a film crew, Sibrel tried to get Aldrin to swear on the bible that he walked on the moon and even called him a coward and a liar. Aldrin responded by punching him right in the jaw.

To celebrate the 40th anniversary of the moon landing, Aldrin collaborated with Snoop Dogg and Quincy Jones on a single and music video titled Rocket Experience. All profits were donated to Aldrin’s ShareSpace foundation. Aldrin didn’t win a grammy, disappointing fans around the world.

10. He knows both Homer Simpson and Optimus Prime.

Aldrin appeared on The Simpson’s episode Deep Space Homer in which NASA tried to improve their public image with a civilian mission.

In the first Transformers sequel released in 2011, Transformers: Dark of the Moon, Aldrin made a cameo appearance and met with “fellow space traveler” Optimus Prime at a secret base in Washington DC. The moonwalker revealed to the Autobots leader that he encountered Cybertronian (that’s the robotic race featured in Transformers) technology on the dark side of the moon during Apollo 11.

11. He is also completely baffled by President Donald Trump

Last Friday, President Trump signed an executive order re-establishing the National Space Council. Buzz Aldrin was in attendance for the event held at the White House. Aldrin was not shy about expressing his downright hilarious reactions to Trump’s speech on the importance of space––while standing right next to him. 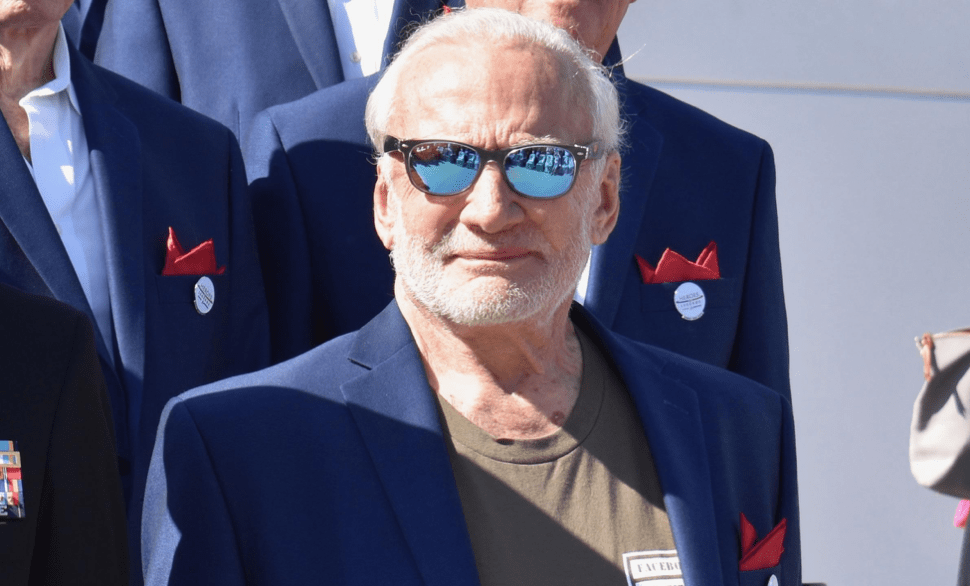