In March of 1972, NASA launched the Pioneer 10 spacecraft to study Jupiter and go further than any human-made object has gone before. Attached to the side of the probe was a greeting card intended to be read by an extraterrestrial civilization should they ever encounter it. Now, Duane King, a designer who is immensely inspired by space exploration and has worked with Apple, Google, and Facebook, will ship replicas of the Pioneer Plaque that he’s created for backers of a very successful Kickstarter.

The gold plaque displays humanity’s general appearance and our location in the Milky Way galaxy. Pioneer 10 sent back its last signal in 2003 and is now coasting toward Interstellar space as a ghost ship with a final mission: to act as an emissary for Earth while on a two-million year journey toward the eye of the constellation Taurus.

The Observer reached out to King to learn more about the plaque and why he brought it back.

Can you tell us a little about the Pioneer plaque and how it came to be?

The origins of the Pioneer plaque trace back to a visit by a group of science correspondents who were invited to TRW Systems for a briefing on Pioneer. As one of the correspondents, Eric Burgess, pondered the passage of Pioneer 10 beyond the Solar System as mankind’s first emissary to the stars, he began to daydream that this spacecraft should carry a message from mankind—a greeting card from Earth.

Burgess brought the idea to Dr. Carl Sagan who was visiting the Jet Propulsion Laboratory in Pasadena. Sagan had recently been involved in a conference devoted to the problems of communicating with extraterrestrial intelligences—and together with Dr. Frank Drake, they had designed one type of message that might be used to communicate with an alien intelligence.

Sagan was enthusiastic about the idea of a message in a bottle being thrown into a vast cosmic ocean. So together with Frank Drake they designed a plaque with artwork prepared by Linda Salzman Sagan which was presented to the National Aeronautics and Space Administration in a narrow time frame of just two months.

What about the gold plaque inspires you?

The Pioneer plaque is emblematic of the hope and curiosity that define our humanity. It is a semiotics legend that tackles one of the most ambitious communication challenges ever conceived—communicating with extraterrestrial life. The information encoded within its iconography tells the story of who, when, and where it came from in a blending of infographics, art history, and almost spiritual or magical visual imagery. It captures my imagination and fuels my sense of wonder.

Why did you decide to bring it back?

The Pioneer program has long been a source of inspiration to me, so much so that it was actually the first domain that I ever bought as it represented the extremes of human exploration. When I bought the url 18 years ago, I obsessively traced the plaque from NASA images painstakingly reproducing each and every binary tick mark. It seeded a deep curiosity about the specifics of the  plaque—from the history to the materials.

I had high hopes that someone somewhere had made a plaque replica that I could purchase—but every example I found was inaccurate in one way or another. Whether the materials, the engraving method, the dimensions, or the mounting holes; the details make the design. So I became driven to create a replica of my very own.

During my research I stumbled across a BBS documentary entitled the Beauty of Diagrams which had an episode on the Pioneer plaque. While watching it, I noticed footage of the original engraver working on the plaques. His hands were time worn and it immediately struck me, “He is still alive!” So I Googled to find out more about him. The man in the footage was Ponciano Barbosa. A technical engraver at NASA in 1972, he now owns an engraving shop in Southern California. So I searched for his shop and clicked through to Google Street View. In the middle of a tiny strip mall there was a trophy-filled shop window with a sign that reads: ”Home of the Pioneer plaque.” So I called his shop and unbelievably, I was speaking with the man who engraved the plaques aboard Pioneer 10 and 11. And he just so happened to still have the original engraving plate used for the Pioneer missions!

My passion for the plaque overwhelmed him. But for Ponciano, making the plaque was a really proud moment. He made an artifact that is floating out there in space right now, billions of kilometers away from us.

What kind of feedback did you receive from your Kickstarter project?

Launching a Kickstarter is a daunting process, and I really wasn’t sure how the public might react. I had hopes that fans of design, space, and Sagan would appreciate it—but there were no guarantees. As it turned out, the response was overwhelmingly positive and the project was funded in just 35 hours! Thanks to my public relations team at Vann Alexandra, the press coverage was incredible too.

The most meaningful feedback that I have received about the Pioneer project was from Nick Sagan who reached out via Twitter to say that ”my sense of wonder and care for it shines through.”  The support of the Sagan family has been an unbelievable highlight. I am overjoyed that they recognize that the project is about celebration, not exploitation.

Can you tell us a little bit about what you are recreating?

The world could use a little more hope—and the Pioneer plaque is gold-anodized optimism. So, in celebration of the 45th anniversary of the launch of Pioneer 10, I decided to create a historically accurate reproduction of the plaque.

Through my campaign, I offered 200 plaque replicas, each manually engraved from the master craftsman’s original 1972 design templates. I wanted it to be special. But I also wanted the plaque to be accessible and to reach everyone who shares my passion for the Pioneer missions. So that’s why I also offered a laser-etched aluminum edition. It’s a close match to the original but it is produced by machine.

Both versions ship in an engineered paper case that I designed that features foil-stamped details and NASA concept art by Rick Guidice (who also famously created covers for Atari classics). And thanks to her gracious generosity, the replicas will ship with Certificates of Authenticity that feature the signature of it’s designer, Linda Salzman Sagan.

What sources did you use to bring the Pioneer back to life?

Everything from NASA special publications such as Pioneer Odyssey (SP-349) to Pioneer – First to Jupiter, Saturn, and Beyond (SP-446) to period articles and photographs. And in the end, Ponciano Barbosa had the master artwork and all of the other missing details regarding plaque corner radiuses and mounting holes that had been mostly lost to time. It’s the connections between all of these bit and pieces of information that informed the accuracy of my production.

Do you personally believe the plaque will be encountered by another civilization someday?

The optimist in me says yes. The realist in me says the odds are against it. That said, I greatly appreciate the humanity-unifying expressions of hope and wonder that missions such as Pioneer and Voyager represent. I’d love to think that someone or something out there will one day find stumble upon it and begin to wonder about us. Our hope, curiosity, and wonder a contagious gift to strangers from strange worlds.

Any plans to follow up the Pioneer recreation with another space-related project?

I have several other replica ideas in the works but I am still vetting possibilities. Short term, I’ve been daydreaming about sending a Pioneer plaque up on a high altitude weather balloon with a live video feed—just for fun. I love the idea of seeing a plaque in the stratosphere!

Mostly, I’m driven to share my passion for space exploration with others though artifacts that are rich in both story and meaning. But I’m equally fascinated by the future of space, from Space X to NASA Mars research. I desire to infuse my love of design, storytelling, and the cosmos into projects that unite rather than divide us. 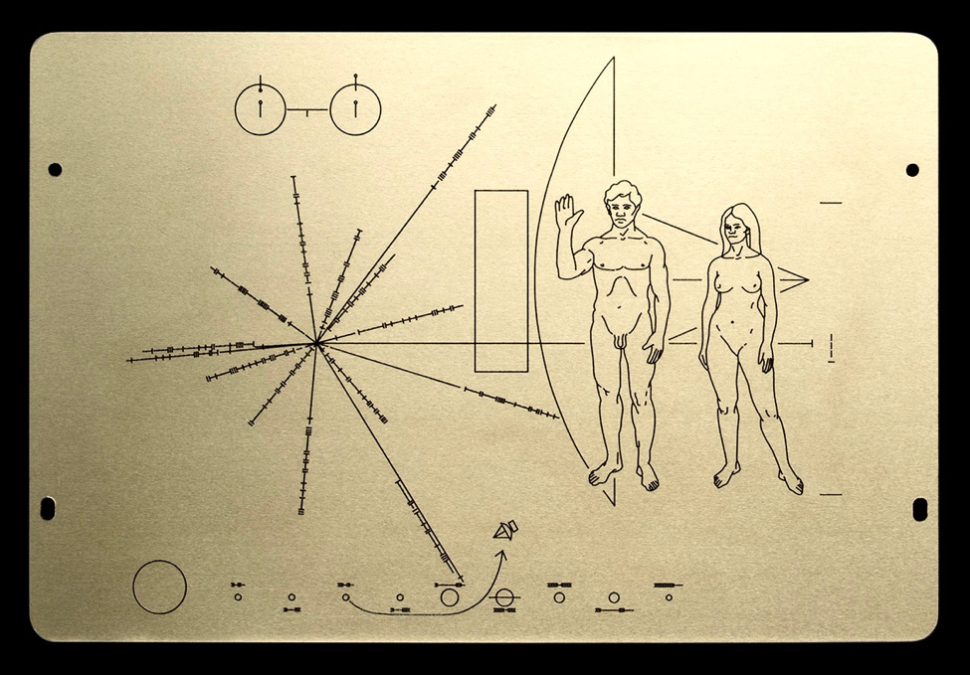