Lawrence Alma-Tadema was once one of the most sought-after painters in Europe during the 19th century for his pictures depicting the stern rulers and handsome youth of ancient Greece and Rome. The producers and designers of the Hollywood Roman epic Gladiator pored over Alma-Tadema’s visions of that era for the film, according to Ridley Scott’s production designer, who was spotted by the Guardian at an Alma-Tadema exhibition in Holland last year.

Yet Alma-Tadema was also the man whom the critic John Ruskin called “the worst painter of the 19th century.” While his work was disparaged and neglected for years, Alma-Tadema is back on the art market with a vengeance. His 1902 painting, The Finding of Moses, as lavish as D.W.  Griffith’s epic Intolerance, was sold in the 1960s for its frame. But in 2010, it brought $35.9 million at Sotheby’s.

And now an exhibition at the Clark Art Institute in Williamstown, Massachusetts has put Alma-Tadema on view in a show that reassembles elements of a Gilded Age interior that the painter himself designed on the northwest corner of Madison Avenue and 68th Street in Manhattan.

“Orchestrating Elegance” doesn’t reconstruct the entire house, demolished in 1912, but just the elements of a music room. And reconstruct would be an exaggeration, since so few of the since-dispersed objects from the room are reunited here. But the central work in that display, a piano made between 1884-87 decorated lavishly under Alma-Tadema’s supervision, is an instrument that tells the story of the painter, his wealthy philanthropist client and a period in which excess was pursued and celebrated.

Alma-Tadema was already famous when he was approached in the 1880s by the railroad and insurance baron Henry Gurdon Marquand to decorate a music room for the massive house that Marquand was constructing ten blocks south of the newly founded Metropolitan Museum of Art, where the businessman was a benefactor and trustee. For Marquand, a collector of Old Master paintings, sculpture and decorative arts, cost was no issue. The show’s catalogue assembles what a wealth of new research on the artist and his moneyed client.

Marquand, considered a credulous buyer by some, had already bought one painting by Alma-Tadema and commissioned another. The room was a perfect project for the artist, who was known for the decoration of his own London residences, where musical soirees brought together prominent folk and potential clients. A Dutchman transplanted to England, Alma-Tadema had a shrewd business sense. His family name was Tadema, but he put his middle name in front because it would put him at the top of alphabetical lists of painters, a clear advantage.

Alma-Tadema’s subject of choice was ancient mythology, although he also painted portraits. Captains of industry might not have been as attractive as the young men and women whom Alma-Tadema put in his scenes from Greece and Rome, but those scenes could convey the feeling that the robber barons, like the gods in Olympus, ruled over everything.

In the 1880s, Marquand got that feeling, and a lot more, in his Madison Avenue palace, with rooms evoking the Alhambra and Japan, where designers also spared no expense.

In the music room, the piano that eventually cost Henry Marquand some $50,000 takes center stage. Designed by Johnstone, Norman & Co. of London, with an interior by Steinway and Sons, the instrument was constructed and decorated with oak, cherry, ebony, boxwood, satinwood, cedar, holly, ivory, coral, mother-of-pearl, abalone, copper, brass and silver.

In an imagined scene that Alma-Tadema painted above the keys, musicians play for dancing women, as a ruler looks on. Enough of the original furniture is in the gallery at the Clark to give that space some of the splendor that Alma-Tadema and Marquand sought. And lest anyone think that the piano was a mere glittering showpiece, a video in the next gallery shows a pianist performing Chopin on it.

Marquand died in 1902 with a cloud over his business. The contents of the house were sold off in 1903. Some objects ended up at the Met, and others at the Philadelphia Museum of Art. Many can’t be traced. Marquand’s urban palace was demolished in 1912, and today an apartment building called The Marquand stands in its place.

As for the piano, it was sold then to a Colonel William Barbour, and then resold at auction in 1923 to the theater impresario Martin Beck, who located it, with furniture from the room, in the mezzanine lounge of the Martin Beck Theater (now the Al Hirschfeld Theater). Over time, it ended-up downstairs, where unknowing theatergoers put their cocktails and their cigarette ashes on the unique jeweled instrument.

When a subsequent owner consigned the piano at Christie’s in 1997, the Clark bought it for $1.2 million. The price, then the highest ever paid for a piano, seems less stratospheric today, given what art sells for at Christie’s now. That price record was broken in 2000, when the piano at which John Lennon wrote Imagine was sold for $2.1 million to George Michael, according to the BBC.

The true excess of Marquand’s palace is hard to conjure up when only fragments from the music room’s former sumptuous setting surround the instrument here. The piano may dominate the room, but it’s delicate and fragile. Few remember the once-regal Marquand, although a painting by John Singer Sargent on loan from the Met gives us a solemn likeness of the plutocrat and philanthropist.

While the gallery assembles a monument to Marquand’s times, the room is also a tribute to Alma-Tadema, as painter and impresario. Marquand’s New York home is gone, but Alma-Tadema’s fortunes have risen. The Clark gives us his imagined vision of the ancient world, and a hard-headed, albeit fragmentary, microcosm of the world that Alma-Tadema gave his clients. A visit to the Clark this summer gives new meaning to the notion of a weekend escape.

“Orchestrating Elegance” is on view through September 4 at the Clark Art Institute. 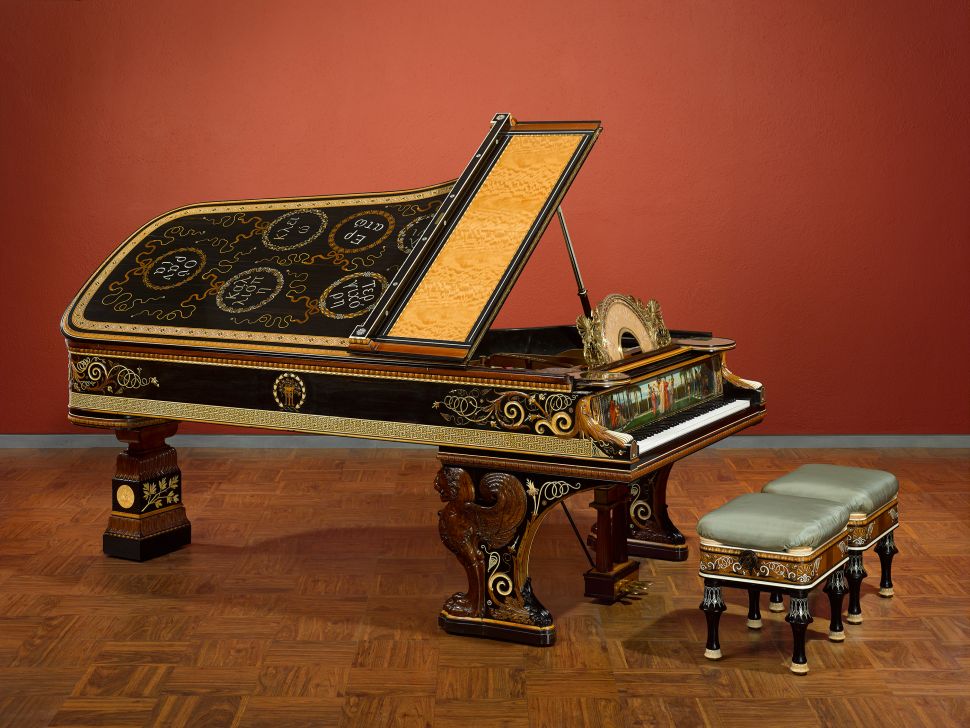