If you’ve read the news recently, you might be wondering if coconut oil is healthy. That’s because the American Heart Association (AHA) released the June 2017 report, Dietary Fats and Cardiovascular Disease, that essentially condemned the health food staple. According to the report, coconut oil increases LDL, or “bad”, cholesterol and has “no known offsetting favorable effects.” On top of that, the AHA recommends you skip the coconut oil in favor of alternatives like soy and corn oil.

I have a lot of respect for the AHA, but when it comes this coconut oil recommendation, I have to disagree. Coconut oil can and should be part of a healthy diet for three main reasons: (1) we need saturated fat, (2) coconut oil actually improves cholesterol and protects against heart disease, and (3) coconut oil is a far superior oil to corn and soy oils.

Let’s examine each of these points more closely.

Saturated fat has long been misunderstood in this country. About 50 years ago, when it was decided saturated fats were bad, we saw the demonization of foods like butter and red meat and the introduction of products like margarine, vegetable shortening and refined carbohydrates. But today, we know that organic butter is much better for you than margarine, that grass-fed beef has a place in a healthy diet and that refined carbs should be avoided. In other words, such blanket recommendations aren’t always correct.

The thing is, our bodies need saturated fat to function. It’s critical for hormone production and regulation and for keeping cells healthy. In fact, the AHA recommends that men consume about 30 grams of the fat per day, or about two tablespoons, while women stick to 20 grams, or a little over 1.25 tablespoons. And unless someone is following a ketogenic, or other high-fat, low-carb diet, it’s unlikely that anyone will surpass those recommendations in one day—even if they have some coconut oil.

Research also shows that when people set out to eliminate saturated fats, they typically replace them with refined carbohydrates like white breads and pastas, which have zero nutritional value. Turning down a fat that your body needs for simple carbs just doesn’t make sense.

If you’re worried about your cholesterol, the AHA report might have shaken you up. However, considering how cholesterol levels factor into overall health is just not that black and white. Coconut oil can definitely raise your LDL cholesterol levels. But what the AHA fails to recognize is that the oil also increases HDL, or good cholesterol. Coconut oil has been proven to lower blood pressure and help people lose weight—two factors that are key in protecting heart health.

The AHA’s real beef with saturated fats is that they believe they’re linked to an increased risk of heart disease. But one study actually showed that low cholesterol—not high—increases risk for heart disease. In the same way we were told to limit our egg yolk consumption in the past, but are now told that eggs are one of nature’s most perfect foods, and this an old myth has been debunked.

My biggest concern with the AHA’s recommendation is the organization’s suggested alternatives. Soy and corn oils are probably the two worst ingredients you could use to replace coconut oil. For starters, most (we’re talking 90 percent) of our corn and soy supply in the U.S. is genetically modified.

Aside from the fact that we still don’t know the long-term effects of GMO crops on our bodies, most of these crops are sprayed with toxic chemicals like glyphosate that remain on the food long after its harvested. We know the side effects of those chemicals, and they aren’t pretty (think fertility problems and cancer).

Another issue with replacing coconut oil with the unhealthier corn and soy oils is that studies have shown that eating more polyunsaturated fats—the kind found in those oils—actually increases your risk of coronary heart disease and death from all causes. These oils are also high in omega-6 fatty acids. And while we do need those in our diet, most of us are actually getting way more omega-6 fats than we need and not enough omega-3s. This imbalance increases inflammation in the body, which is the leading cause of chronic diseases. The goal is to get our omega-6 to omega-3 ratio at 1:1. Corn oil’s ratio? 49:1.

And if you turn to corn and soy oils for cooking, you’re cooking with rancid oils. During the processing, any antioxidants these oils might have had are destroyed, while free radicals are created thanks to the chemical changes the oils are exposed to. Coconut oil, on the other hand, is all natural and has a smoke point of 450F, more than high enough for your home cooking.

While the risk of getting heart disease in America is very real, coconut oil isn’t to blame. If you’re worried about your heart health, I encourage you to remove added sugars and refined carbohydrates from your diet. These ingredients have actually been proven to raise bad cholesterol levels, decrease insulin sensitivity, and cause weight gain—all of which increase your risk of cardiovascular disease. As for your benefit-rich coconut oil? Keep on enjoying it. 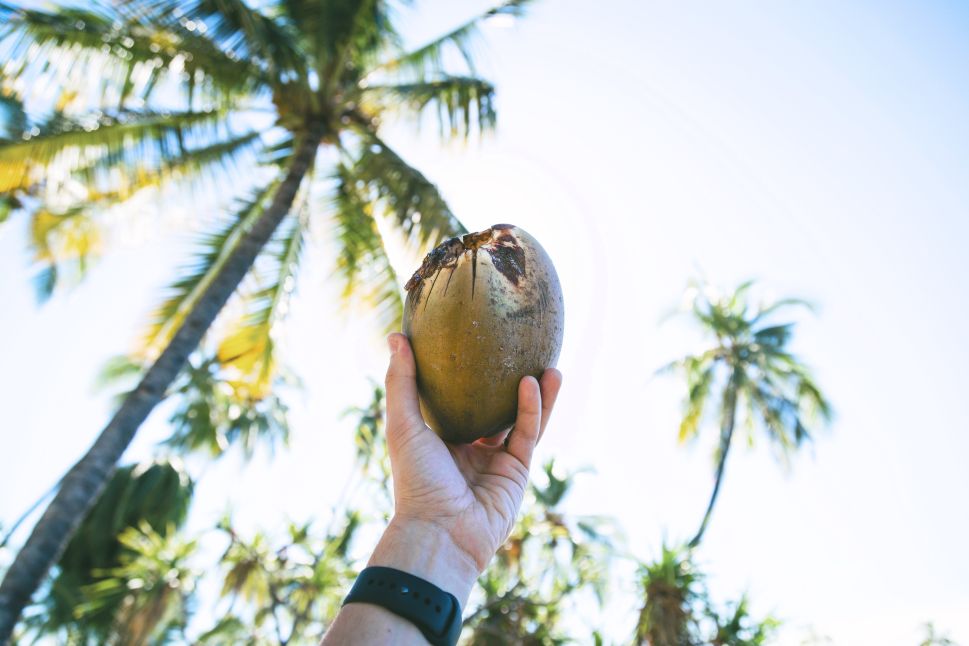