Imagine a world that puts Bonnie and Clyde out of business—all because banks no longer stack bills and coins.

For example, if you want to spare some change for a beggar you no longer need to rummage through your pockets. Now, you simply scan the beggar’s bar code. This has already happened in China.

On February 28, Alipay, China’s leading third-party online payment solution and an affiliate of Alibaba, announced an ambitious plan to create a “Cashless Nation” in five years. And the countdown has started. As part of its efforts to encourage “top-down” supports for the program, Alipay will host a weeklong celebration of “Cashless Society Week” from August 1 to August 8.

During Cashless Society Week, Alipay will throw out various “cashless challenges” and accompanying awards to inspire institutions and individual rallies behind this unprecedented initiative. To date, Hangzhou, Wuhan, Tianjin, Fuzhou and Guiyang—five cities with an aggregate of 38 million population—have signed up for Alipay’s program. With more cities expected to join, the movement is gaining momentum.

Alipay expects that “cashless payment” could become another signature achievement of the modernized China. This is surely a shrewd move on the part of Alipay. With not-so-subtle peer pressure, no competitive cities want to be left behind in attracting tourists and business investments due to a lack of digital payment connectivity. A city can boast a “cashless ecosystem” when 90 percent of its local business and retail consumptions, transportations and public services are based in digital payments.

Subscriptions by local governments to the program would multiply. For example, I plan to leave my wallet at home when I visit my late father’s hometown, as Fuzhou expects to see 90 percent of its offline businesses supporting mobile payments by the end of this year.

Experiments abound. Tianjin, a city 78 miles away from Beijing, has introduced the concept of “cash-free campuses,” allowing the city’s 700,000 college students to pay their tuitions and other campus expenses with their mobile phones. Alipay-engineered digital cards, in addition to supporting cashless payments on campuses, will phase out physical student IDs.

In China, seeing a doctor is a notoriously difficult ordeal because of the excruciating wait time. In February 2016, Guangzhou Women and Children Medical Center joined force with Alipay and its affiliate Zhima Credit to launch the first “Payment after Treatment” system, making it the country’s first credit friendly hospital.

Patients who score 650 and above by Zhima Credit are entitled to direct registration, diagnosis and treatment, and medical exams and prescription services. Online payments follow the day after treatment.

Alipay expects the program to cut down hospital queues by reducing the average outpatient visit by 52.7 minutes—a 41 percent reduction.

On June 20, Hangzhou initiated the country’s first “facial scan” identification pilot system, allowing patients to convert their biometrics into QR codes, which will serve as their IDs for receiving medical treatments and making cashless payments. The program would benefit Hangzhou’s population of 9 million when fully implemented.

Alipay is careful to emphasize that this self-proclaimed cashless initiative is not about eliminating banknotes and coins per se; it’s about advancing digital payments in lieu of cash transactions.

According to a report released by iResearch in April 2017, the GMV (Gross Merchandise Volume) of China’s third-party mobile payments hit 18.5 trillion yuan ($2.7 trillion) in the fourth quarter of 2016, representing a 297.4 percent growth on a year-to-year basis.

The value of Chinese third-party mobile payments more than tripled to 38 trillion yuan ($5.5 trillion) in 2016.

Financial Times reported that Chinese mobile payments were nearly 50 times greater than those in the U.S. in 2016.

In April, Ant Financial, Alipay’s parent company, teamed up with U.N. Environment and other partners to launch the International Cashless Alliance in Hangzhou. Part of an ambitious plan to help advance China into a cashless society, Ant Financial announced an investment of 3 billion yuan ($440 million) per year in the coming two years into “green finance” that would change the fabric of every city and its residents.

After all, “Ant” financial was named to symbolize the “little guys.” The “green finance” is predicated on efficiency and savings. A report by the World Bank found that government and businesses can cut up to 75 percent of costs through digital payment programs.

Why has China become the playground for a new tech-driven financial order? The characteristics of China’s financial system lend itself to cashless payments, including:

The advanced digital payment ecosystem and implementation of credit scoring would stimulate online consumptions and changing attitudes toward credit and debt. In the past, loath of borrowing was an ingrained Chinese psyche.

Yet, while uses of credit by individuals and small businesses would surely rise in the coming years, don’t expect a surge in uses of plastics. In fact, China may leapfrog mature economies in the use of electronic payments and may never adopt credit cards at the scale of the United States.

Originally conceived as an ancillary escrow service to support the online transactions on Alibaba’s Taobao and Tmall platforms, Alipay has since morphed into a financial giant, offering a broad suite of services through its affiliates Yu’e Bao, Ant Fortune, Zhima Credit and MYbank.

Alipay is more than just a virtual wallet like Apple Pay.

And all without transaction fees!

Alipay’s upcoming game plan is globalizing its platform. After its foray into Asia and Europe, Alipay has recently expanded its footprint to North America. Partnering with payment processors First Data and VeriFone, Alipay has signed up a large number of merchants in the U.S. and more than 450 merchants in Canada.

With many developed and developing countries, as well as other Chinese third-party payment platforms, racing to roll out their own digital payment initiatives, Alipay is on an all out campaign.

In the last few years, Alipay’s turf has been invaded by Tencent’s Tenpay. An extension of the omnipresent messaging system WeChat, Tenpay’s business model is “social trapping.” Alipay’s advantages, on the other hand, lie in its vicinity to Alibaba’s e-commerce platforms and that it can leverage massive transactions-based data to construct users’ credit profiles and offer additional lending services.

Market research firm iResearch reported that in Q1 2017 Alipay accounted for approximately 54 percent of the total value of mobile transactions in China, compared with 40 percent of Tenpay. Average Alipay transaction values are higher than Tenpay’s.

But Jack Ma, Alibaba’s executive chairman and a strong backer of Ant Financial, is not fazed by the competition. In June, during Alibaba’s Gateway ’17 Conference in Detroit, Ma told CNBC, “Well, when you do business, don’t worry about competition. There’s nowhere in this world there’s no competition. You have to get used to it.”

Ma also declared, “[I]n five years, we will make most of the cities cashless societies in China. Hangzhou, my city, is already [a] cashless society—almost.”

A Brave New World With Lots of Money but No Cash

Many of the technologies advanced by the Chinese digital payment platforms, as well as China’s planned credit scoring system, would trigger surveillance and privacy concerns. The data procured would not only serve to gauge people’s finances but also to rate the creditworthiness of citizens in the full gamut of their lives—whether business dealings, social conducts or otherwise. But so far convenience trumps civil liberty concerns, and privacy is largely taking a back seat in China.

China is ushering in a “brave new world”—sans cash, that is. Guiyang, the capital of Guizhou Province located in Southwest China, recently launched a 13-day “cash-free challenge,” reporting that one resident expended only 2.5 yuan ($0.37) in cash during those 13 days! A recent survey by Sina Weibo showed that more than 70 percent of 40,000 surveyed citizens believed that cash was not a daily necessity and 11 percent believed they were living in a “cashless society.”

Although centered in China, the Cashless Society Week could easily become the largest of its kind on earth due to China’s massive population. In the States, we swipe; in China, they scan. Without exaggeration, the more I go to China, the more I feel like a barcode myself.

In their race to dominate the market, Chinese third party payment platforms are offering a streamlined ecosystem that would “trap” the end-users as long as they would allow. There is no question that this utopia is predicated on an increasingly integrated system. Therefore, this new world promises a “totalizing” experience. QR codes—not cash—are becoming king.

By Alipay’s count, there are 1,694 days to China’s cash-free utopia. This cashless heist is riveting, and somewhat scary, but it’s getting more real with each day. 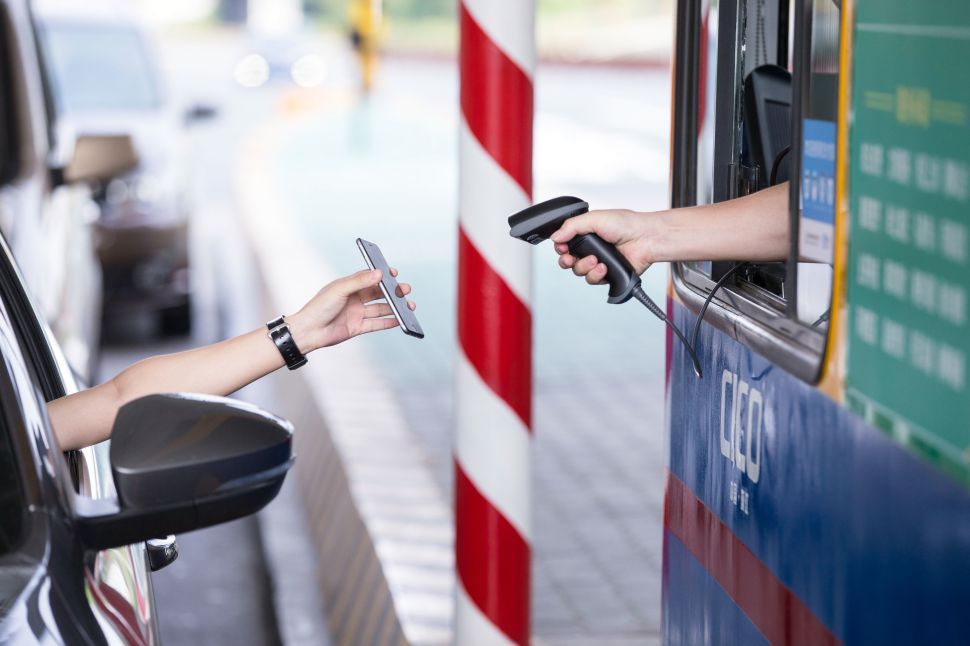