When the Autoblow shipped to German and Swiss customers from the US back in 2014, customs officials used to make guys open up the boxes in front of them—not exactly setting the right mood. Its creator had to open up a UK office so he could ship the devices from a location that permitted customers to open the boxes in the privacy of their own home.

“It’s a messy affair behind the scenes to accept cryptocurrencies, but I feel it’s worth it to help protect the privacy of my most private customers,” Sloan said in a press release. His company, Very Intelligent Ecommerce, may well be the leader in sex toys for men. 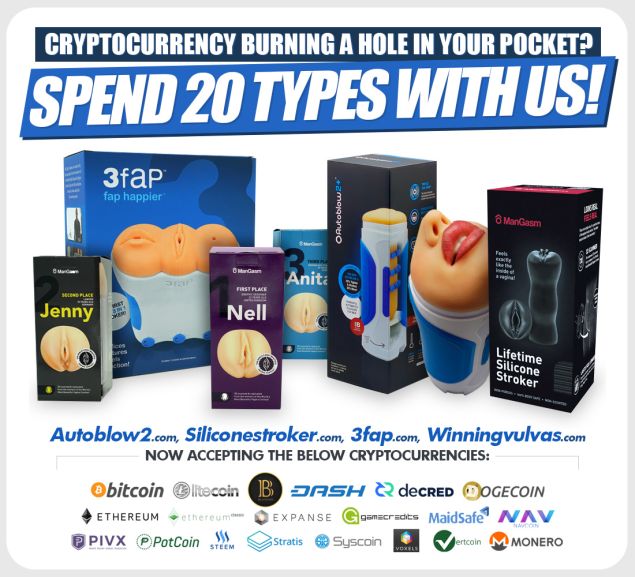 With cryptocurrency, a customer can pay for their Autoblow2, 3fap or Mangasm online without anything showing up on a credit card. All they need to do is figure out how to set up some kind of cryptowallet and exchange some real money for any of the above coins (it doesn’t really matter which one), and there won’t be a piece of paper out there that shows a purchase for an auto-stroker.

Pro tip: people who really want to be private should consider using two wallets. Once you have cryptocurrency, it’s super easy to shift money between wallets, and most wallets are free. So if you buy crypto with whatever company can connect to your bank (such as Coinbase, probably the most popular), then shift it to another wallet on a mobile or web app that has never connected to your bank. Buy it from the second wallet and you will have really laundered your jerk-off budget effectively.

Or just write some really great blog posts and buy it with money you earn on STEEM. Then the purchase will never touch a bank account at all.

Sloan’s a bit stressed out, too.

“I’ve never owned bitcoin before. This is, like, pretty risky for someone running a physical products business,” he told Motherboard in a phone interview. He had to find a special processor to handle these transactions, adopt new processes and account for new fees. Plus, if a currency tanks after he’s closed a sale, he takes a loss. Still, he’s doing it because he has customers who want this layer of privacy.