Celebrities revealing photos and disclosing information about their children on social media is a tricky business. Some famous parents fiercely guard their kids from the public eye, while others excitedly Instagram everything from the sonogram to the wobbly crawling.

There are the Chrissy Teigen-type moms, who Snapchat their toddler using every conceivable filter and are open about every step of parenting the process. Others, such as Dax Shepard and his wife Kristen Bell, have been vocal about why their children are off limits to the paparazzi. Beyoncé falls somewhere distinctly between the two. The former single lady is eager to share photos of her children, first Blue Ivy, and now twins Sir and Rumi, but only in a highly guarded way, choosing photos with a specific narrative, to share on social media.

In Beyoncé’s latest Instagram snap, she posed with the twins, who are now a month old, which looks rather similar to her picture announcing their existence. That particular photo became the most-liked Instagram of all time, accruing 11 million likes. As of this moment, her most recent post has 6.8 million likes and counting. In this image, captioned only “Sir Carter and Rumi 1 month today,” the pop star is pictured with a similar floral arch and color scheme, dressed in a floral frock by gender neutral label, Palomo Spain.

We would like to share our love and happiness. We have been blessed two times over. We are incredibly grateful that our family will be growing by two, and we thank you for your well wishes. – The Carters

It’s not often one month old babies have their own aesthetic, but of course Beyoncé’s children are already associated with florals and gauzy veils in seaside colors. They can never take awkward selfies with braces or pose in their classrooms. They’ll be expected to live up to their introductory photo, where they’re displayed looking like a Disney prince and princess.

This isn’t the twins’ only brush with fame, even though it is the first time the world has seen them. Directly after their birth, trademarks were filed for both “Rumi Carter” and “Sir Carter,” before their names were officially revealed.

The trademarks were for fragrances, cosmetics, key chains, baby teething rings, strollers, mugs, bottles, hair ribbons and rattles. It looks like there might be a baby line on the way. If they promote rattle #ads on Instagram, they can each receive a million dollars. 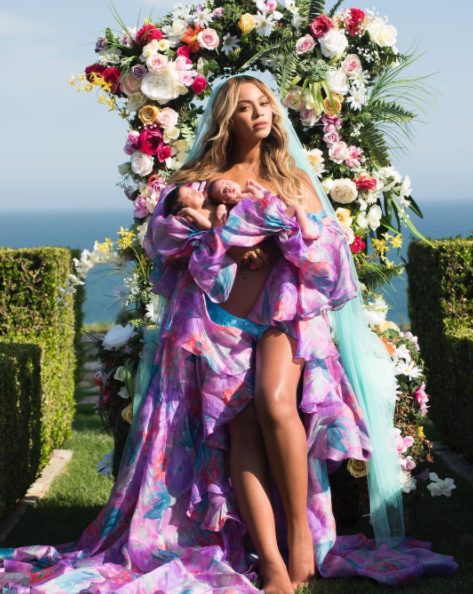