If you’re looking for a big celeb sighting this summer, you might have to venture a bit further than the usual haunts of the French Riviera, Amalfi Coast and all of the Greek islands. While you’re sure to find many a famous face in all those spots, Tahiti has been gaining some serious star power.

Former president Barack Obama was ahead of the trend when he ventured to the nearby French Polynesian island Tetiaroa back in March. He spent nearly a month there, reportedly writing his memoirs. He also took some time to enjoy the tropical paradise aboard David Geffen’s yacht. Then Pippa Middleton and James Matthews selected the same luxe resort Obama stayed at, the Brando, as one part of their multi-destination honeymoon.

Part of the funnest group ever ! Bye Tahiti !

The most recent crew to descend on the island is almost celeb overload—it included Bradley Cooper and Irina Shayk, as well as Diane von Furstenberg, Allison Williams, Anderson Cooper and Andy Cohen.

The trip was the first time Cooper and Shayk have been photographed together since Shayk gave birth to their daughter, Lea de Seine, in March. The couple has both made separate public appearances—the model made her post-baby debut on the Cannes red carpet, looking flawless in a yellow Atelier Versace dress, while the actor popped up at Glastonbury (he was shooting scenes for his upcoming film, A Star Is Born).

The famously private duo didn’t even post any photos together on vacation, though Shayk shared a few scenic snaps of a sunset, her feet in a bathtub, a beach selfie and a few others. Luckily, Diane von Furstenberg saved the day and took a group shot on a yacht, capturing Shayk, Cooper, as well as Allison Williams, her husband Ricky Van Veen, Anderson Cooper and his partner Benjamin Maisan, all in one frame.

We can’t say for certain, but it’s likely that this yacht is Eos, the 300-foot boat owned by von Furstenberg and her husband, Barry Diller.

It looks like Andy Cohen missed out on that particular take, but we’re loving these posts of the journalist and talk show host just being best friends and casually posing on the side of the boat and in the , framed by palm trees.

Even though the fashion designer and Cohen missed out on that group shot, they made up for it with a picture of just the two of them. The picture of Cohen and von Furstenberg was simply captioned “Wearing DVF with DVF.”

Indeed, many of the sartorial choices of the trip look like they can be attributed back to the designer, including the chic wrap dress Shayk donned in one of von Furstenberg’s Instagrams.

Von Furstenberg might just be the photographic winner of the trip—her feed is filled with snaps en route to French Polynesia and many other scenic photos, including a sunset and quite a few of the crystal clear, sparkling blue waters. She even managed to get in a glamorous, patriotic post for July 4.

The trip has sadly come to an end, with a few farewell snaps from a few members of the group, namely Cohen and Cooper, though surely they’ll plan another getaway aboard Eos in the near future. Perhaps they should consider taking further inspo from the former first family and head over to Bali. 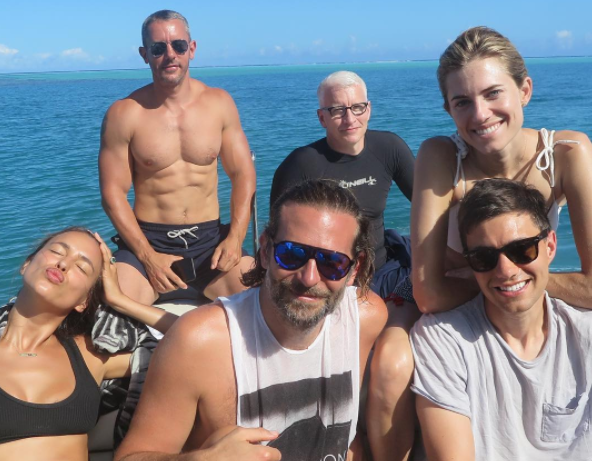