Three days after Manhattan District Attorney Cyrus Vance announced that he will no longer prosecute the majority of individuals charged with fare evasion starting this fall, the Coalition to End Broken Windows said his alternatives — civil summonses and community service — would “still burden communities of color.”

Starting in September, Vance will no longer prosecute the overwhelming majority of people charged with theft of services — or turnstile jumping — unless there is a public safety reason that makes it necessary. He plans to work with the NYPD and the Mayor’s Office of Criminal Justice in the coming months to decrease the number of people prosecuted in Manhattan, which will involve giving out summonses instead of arresting people, providing pre-arraignment diversion and issuing a desk appearance ticket.

If individuals finish a diversion program, the office will not prosecute the case and the individual will not have to appear in court; their records also would be sealed.

“The coalition does not applaud the Manhattan DA’s announcement, which, like other half-hearted efforts to combat decades of racist policing, still upholds the notion that people should continue to be punished for being too poor to use public transportation,” the group said in a statement released late afternoon. “Vance’s alternatives, civil summonses and community service, will still burden New Yorkers of color, who are the overwhelming majority of those arrested and ticketed for fare-beating, while offering the public and the media a superficial mirage of reform.”

Vance said that since 2010, his office has collaborated with the NYPD and the Mayor’s Office of Criminal Justice to end the prosecution of “tens of thousands” of low-level cases.

His new policies, he said, will reduce immigration, housing, employment and other repercussions; allow his office to concentrate its resources on probing more serious crimes such as domestic violence, drunk driving, stalking and assault cases; reduce the backlog of cases in Manhattan Criminal Court; strengthen law enforcement-community relations; and minimize the jail population on Rikers Island.

The groups noted that for more than 20 years, broken windows enforcement — which targets smaller crimes to stave off larger ones — has disproportionately affected the poor and homeless and minorities, street vendors, subway performers, young people and LGBTQ and immigrant New Yorkers.

On former Police Commissioner Bill Bratton’s last day, Mayor Bill de Blasio said broken windows needed to be revised but was “still the right approach.” He contended that the policy helped decrease crime in the city over the years, a drop that mainly took place during Bratton’s first term under former Mayor Rudy Giuliani.

And in response to a letter Brooklyn Congresswomen Yvette Clarke and Nydia Velázquez sent him asking him to revisit the use of broken windows and review summons practices, he said quality of life policing works and must be applied fairly and consistently. He also said quality of life offenses have “very little bearing” on undocumented individuals because only a “more serious matter” or “a pattern of consistent negative behavior” as in cases such as fare evasion yield arrest.

The coalition members blasted de Blasio for stating, in response to Vance’s announcement, that frequent fare beaters are “asking for higher consequences” and that there is “no way in hell anyone should be evading the fare.”

“He is committed to Broken Windows,” they said. “The Manhattan DA’s announcement, however, like a recent NYPD patrol guide change as well as the City Council’s Criminal Justice Reform Act, will not end the era of Broken Windows.”

Indeed, they argued that Vance’s action does not help undocumented immigrants who are at risk of deportation when arrested for low-level offenses. The group noted that regardless of what a prosecutor decides to do post-arrest, “the fingerprints will still be sent to the feds.”

“This announcement (not even an official policy, from what we can garner), which doesn’t even seem to have the support of police, won’t change how the NYPD carries out enforcement,” they said.

At the end of March, Police Commissioner James O’Neill admitted that undocumented immigrants who get arrested for turnstile jumping can be deported, according to Politico New York. The New York Times reported that O’Neill was working with Vance but that they are still working out the details on the diversion process.

New data from the State’s Division of Criminal Justice Services found that police have arrested roughly 8,625 people for turnstile jumping this year to date—and that 89 percent of arrested individuals were black and Latino, according to DNAinfo New York. And about 25 percent of those people spent time in jail for the offense, according to the data.

The activists argued that civil summonsing or “simple ‘decriminalization promises” will not stop police officers from overseeing enforcement. Last month, a judge finalized a $75 million settlement the city consented to pay due to the NYPD giving out 900,000 summonses despite not having any legal rationale to meet quotas. They also feared higher conviction rates and an expansion of a “police-enforced tax on poor communities” given that defendants won’t have access to publicly-provided lawyers in civil court.

“These are the fundamental non-police solutions to quality-of-life issues that New Yorkers want to embrace—not weak announcements from opportunistic politicians,” the coalition added. “We challenge Manhattan DA Cyrus Vance, Queens DA Richard Brown and Bronx DA Darcel Clark to appear at our next town hall events so they can answer questions from the community about their role in criminalizing New Yorkers of color.”

Acting Brooklyn District Attorney Eric Gonzalez, the Legal Aid Society, Queens Councilman Rory Lancman, chairman of the City Council’s Committee on Courts and Legal Services, have all praised the move as a step in the right direction, though some groups like VOCAL-NY and mayoral candidate and activist Bob Gangi have approached the development with caution. 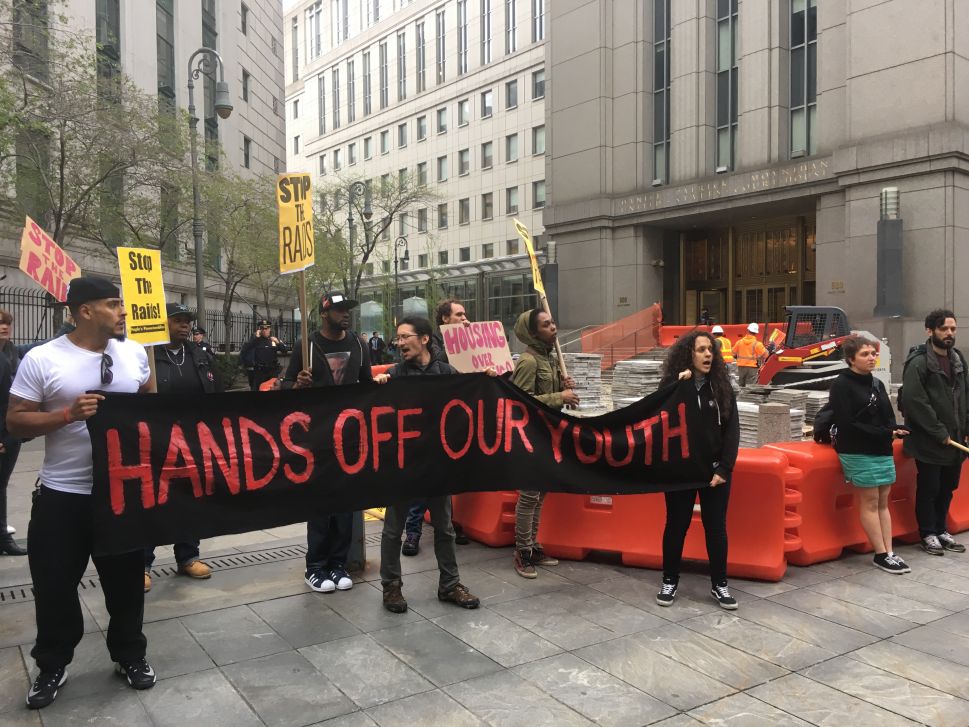