Gov. Chris Christie supports paying state workers for time they missed during the three-day government shutdown, if the Legislature sends him a bill to do so, his spokesman said Wednesday as a back-and-forth between Christie and Assembly Speaker Vincent Prieto continued.

At issue was how to pay the roughly 30,000 employees who couldn’t show up to work July 3 when a budget brawl shuttered state government. Prieto (D-Hudson) had called on Christie to use his executive authority to pay workers, while Christie contended the issue first required legislative action.

“There is no lawful way for the governor to do so on his own,” Christie spokesman Brian Murray said in a statement Wednesday. “If the legislature were to send him a bill reinstating pay for those workers, he would promptly sign the bill.”

The statement was the latest tit-for-tat response to Prieto, who on Tuesday called Christie’s argument that he couldn’t pay workers on his own “ridiculous” and said the governor still hadn’t promised to sign legislation paying furloughed workers.

“If the governor finally concedes after I called him out on it that he will sign such a bill, then he will get the chance to prove it, even if his record on keeping his word is very poor,” Prieto said.

Christie and Prieto have continued to feud more than a week after a budget deal re-opened state government. The two were at odds over a bill tied to the budget that would restructure New Jersey’s largest health insurer, Horizon Blue Cross Blue Shield. Prieto had refused to post the bill for a vote, and Christie threatened to veto out spending Democrats added to the budget if he didn’t get it. Ultimately, they agreed on a watered-down version of the legislation.

“The governor believes that the fault for the government shutdown has never been with the rank and file state workers. It is now, and always has been, with Speaker Prieto,” said Murray, the Christie spokesman.

“One thing’s for certain – the buck sure doesn’t stop at this governor, who never takes responsibility and always blames others,” Prieto responded.

Senate President Steve Sweeney, who announced a bill to give back pay to workers on Friday, thanked Christie for saying he would sign such legislation.

“I welcome the governor’s willingness to see that state employees are not penalized by losing pay for the time they were prevented from doing their jobs,” said Sweeney (D-Gloucester). “We want to act swiftly so that there is no uncertainty in the minds of public employees who rely on their paychecks to support themselves and their families.”

There already has been uncertainty. Christie gave mixed signals on the issue, initially saying “don’t count on it” when asked if the workers should be paid for the missed day of work. And state employees were told last week to apply for unemployment benefits to get compensated for the shutdown.

In addition to Sweeney, Sens. Christopher “Kip” Bateman (R-Somerset) and Linda Greenstein (D-Middlesex) sponsored the Senate bill to give state workers back pay for the shutdown.

“I am relieved to see that Governor Christie is open to signing our bipartisan legislation to protect state workers,” Bateman said in a statement. “Not one of the tens of thousands of public employees who were furloughed during the shutdown deserves to have their paychecks cut.”

“This is great news for the workers who were affected by the brief government shutdown,” Greenstein said in a statement. “These men and women run our state agencies and make sure the services that our residents depend on are delivered in an efficient way.”

Update (6:18 p.m.): This story was updated to include statements from Bateman and Greenstein, who are sponsoring a Senate bill to pay state workers for time they missed during the government shutdown. 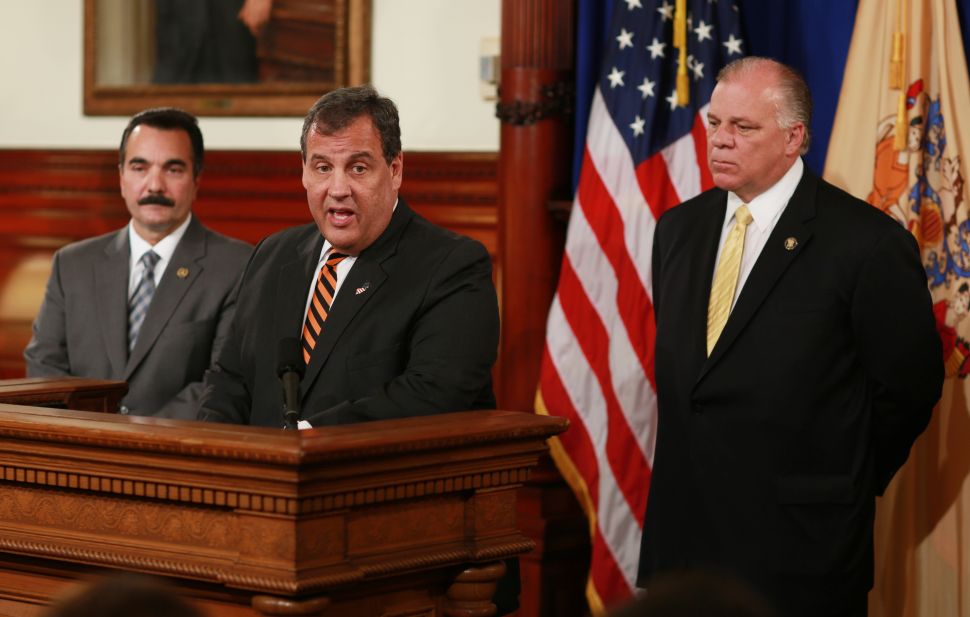