Senate Minority Leader Charles Schumer admitted on July 22 that the blame and responsibility for the Democratic Party losing to Republicans lies with the party itself—not with the various scapegoats it has cited since Hillary Clinton’s loss. While his rhetoric is refreshing to hear from a Democratic leader, his diagnosis misses the point.

“When you lose to somebody who has 40 percent popularity, you don’t blame other things—[James] Comey, Russia—you blame yourself,” Schumer told the The Washington Post. “So what did we do wrong? People didn’t know what we stood for, just that we were against Trump. And still believe that.” Schumer got the first part right, but the second part of his introspection reveals that Democratic leadership is oblivious to the country’s political climate. Voters believe that Democrats don’t stand for anything but being anti-Trump, in part because all of the party’s messages and marketing tactics revolve around vilifying Trump. Even so, the party has provided weak opposition to his administration and Republicans.

When opportunities have arisen to provide stark contrasts between the parties, Democrats have reverted to compromise, pragmatism, and have adopted watered down stances in opposition to the austerity-driven agenda of Republicans. Democrats don’t just have a marketing problem; they have a political problem. Their incessant courtship of corporate and wealthy donors has poisoned the party and diminished voters’ trust. That trust won’t be rebuilt with a shiny new slogan or empty, meaningless rhetoric.

Trump’s presidency is a result of the deterioration of the U.S.’s political system, which was accelerated by Citizens United, the disastrous Supreme Court decision that allowed wealthy people and corporations to buy off politicians. Both parties favor fundraising from these special interests over representing the people and winning their support.

On July 23, Schumer told ABC’s This Week, “Our party is going to be unified,” as though its up to him and party leaders rather than Democratic voters to decide this. This sentiment also affirms that the Democratic Party will continue focusing on manufacturing consent rather than enacting reforms to accomplish true unification. Schumer cited that reducing costs of prescription drugs will be a key part of Democrats’ new platform. However, in January 2017, Democrats sabotaged Bernie Sanders’ amendment to accomplish this. When Sanders capitulated to the 13 Democrats who held out due to safety certifications—a classic big pharma talking point—two Democrats shut down that new bill as well. Progress on this issue will be impossible so long long as Democrats court donations from the pharmaceutical industry. Schumer also cited that Democrats are looking at supporting single-payer health care, a clear appeal to progressives. His approach to single-payer—and that of many Democratic leaders—is to not oppose it outright but instead elevate reasons why providing health care to every American should be debated and compromised in relation to the health insurance industry subsidy program, Obamacare. House Minority Leader Nancy Pelosi confirmed that Schumer’s rhetoric and the Democratic Party’s new agenda was just a marketing scheme when she said in a Washington Post interview that the agenda “is not a course correction, but it’s a presentation correction.”

A few weeks ago, Schumer was at a lavish party in the Hamptons with top Republican donors. Both parties incessantly gathering behind the scenes with elites signals to voters the two-party system is a facade and that Democrats and Republicans serve the same group: donors. Leading up to 2020, potential presidential nominee Sen. Kamala Harris has focused on meeting donors in the Hamptons over appealing to voters.

Schumer has not disavowed this record or acted to quell concerns warranted by his attendance. Throughout his tenure in the Senate, he has been one of Wall Street’s top politicians. He has yet to distance himself from these ties or publicly recognize the political fallacies in maintaining them, as Wall Street’s interests are in direct opposition to those of working, middle class, and low income Americans. Instead of fighting for the average American, Democrats have enabled the 1 percent get richer and wealth inequality to worsen. ANd instead of expanding the social safety net to working, middle class, and low income Americans, Democrats have ignored their woes and favored corporate subsidies and socialism for the wealthy. 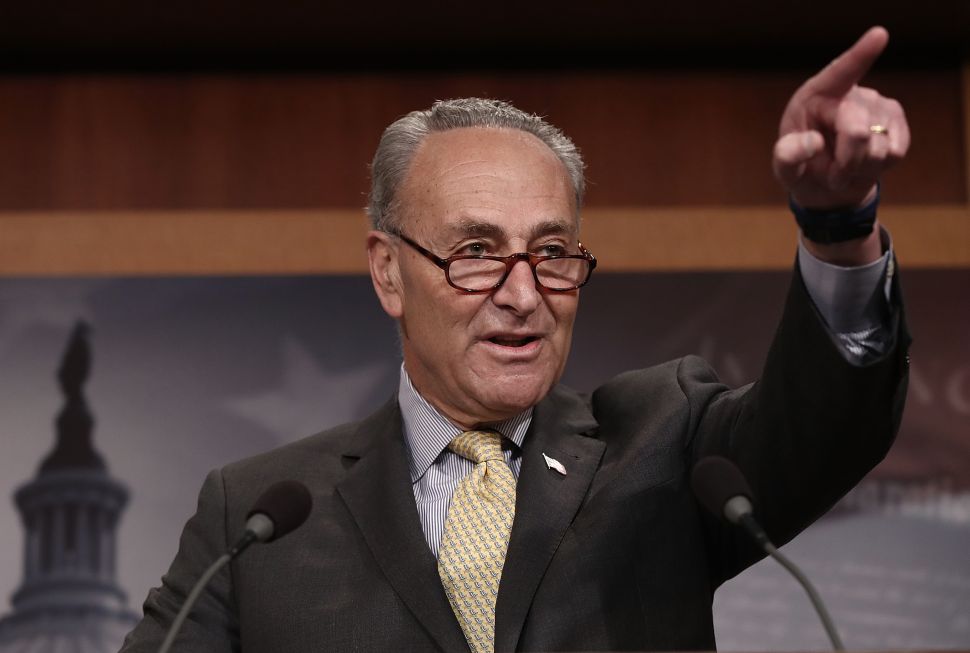