First dates are a little weird for everybody, but the Superb Bird-of-Paradise may have the craziest first date in the animal kingdoms. This avian actually warps its whole body and dances so that it appears to be a giant, two-dimensional and slightly terrifying black and blue smiley face.

If the bird had only been recently discovered, it definitely would have been named the Emoji Bird, because when it transforms it looks like a bizarre emoji come to life.

In the video above from the Cornell Lab of Ornithology, you can see a Superb spot a lady and gather up his feathers. He even has to use his beak to make it all work. By spreading out his jet black feathers in just the right way, all depth disappears from his body as light vanishes into them, as if he were a tiny, tiny black hole. Then, to keep the effect going, he hops right and left to make sure that the lady bird can’t see him from any angle from straight on.

Even better, scientists realized recently that a bird that they had thought was the same species is actually a second species. They could tell once they finally got recordings of the second bird’s courtship dance. The birds only make these shapes when they are wooing ladies, so it can be tough to observe in the wild.

“For centuries, people thought the Superb Bird-of-Paradise in the mountains of the Bird’s Head region was a little different from the other populations throughout the rest of New Guinea, but no one had ever documented its display in the 200 plus years this bird has been known to occur there,” Ed Scholes, a Cornell scientist, says in a post on the lab’s website. Subsequent genetic studies confirmed the scientist’s intuition.

The first bird scientists observed in New Guinea looks like a giant oval with a weird smile, while the newly discovered species from Indonesia looks much more stern—at least, when he’s getting his charm on. It doesn’t always work.

In evolutionary terms, this is an example of sexual selection. When people talk about evolution, they usually focus on natural selection, the adaptations that allow creatures to survive and thrive. In truth, sexual selection—traits that make a mate more attractive—is also an extremely powerful force driving the shapes of species.

Students of evolutionary biology know that it’s not at all unusual for species to exhibit sexual favor for traits that have no survival advantage—for example, excessively large antlers on deer or widowbirds with such heavy feathers that it’s hard to fly. Still, it beats being a male Anglerfish; males aren’t even really distinct organisms in that especially depressing species.

Every bird-of-paradise has a unique shape it takes on during its mating ritual, which can be seen in video at the Birds-of-Paradise Project. They are all worth checking out, but the video above is the craziest.

It’s got to be a tough facade to keep up. Imagine how the man-bird feels when years later his bird-wife reminds him, “Honey, I love you just the way you are, but I get super nostalgic whenever I think of that first time you warped your body into a giant two-dimensional smiley face.” 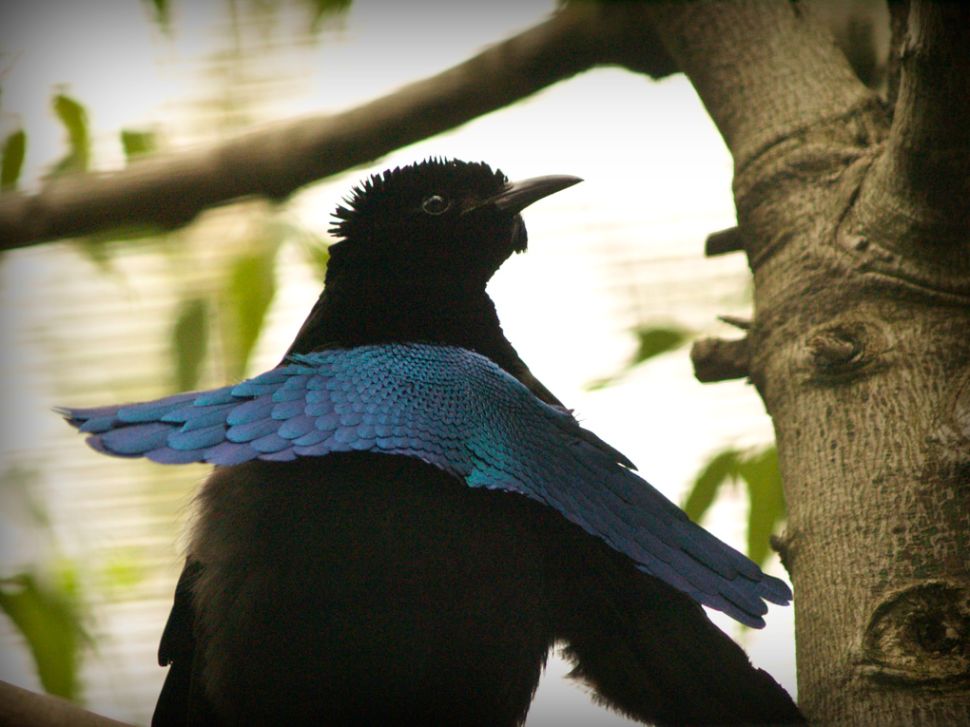