Man buns have gotten a bad rap over the years, as hipsters infiltrated Brooklyn (and even the cover of the New Yorker) with this scrappy male ‘do. Even the iconic Ken doll has received a makeover with the slicked back hairstyle, much to the chagrin of Twitter.

So David Beckham certainly took a chance when he tied up his long locks to take in day five at Wimbledon. Seated in the Royal Box, alongside both his mother, Sandra Beckham, and Vogue‘s Anna Wintour, this well-publicized tennis match was certainly not the place to experiment with new grooming looks. However, his risk paid off and the former Manchester United footballer proved that this hairdo can add to an all-over polished look, rather than diminish it.

For the chic sporting event, Beckham donned a navy sport coat from Polo Ralph Lauren (which appears to half of the Connery Cotton-Blend Suit) and chose to keep the rest of his threads in a similar color scheme. To accent the slim jacket, he wore a blue striped shirt and a knit tie, just a shade lighter than his jacket. For a similar look, we’re partial to this Hermès tie, which is actually four different colors in one reversible style. Paired with a simple pair of fitted khakis, it was a tasteful summer look that was truly elevated by Beckham’s choice of accessories.

Beckham added just a few touches of gold, thanks to a simple, polished gold tie clip and a square signet pinky ring, which appears to be sans inscription. On his left hand, he wore his usual wedding band. His left wrist boasted a chunky watch, which we assume to be from Tudor, as he’s the face of the brand’s “Born to Dare” campaign. The look was finished off by a subtly printed silk pocket square (similar to this Salvatore Ferragamo paisley number) and a pair of classic Ray-Ban aviators, in silver.

These subtle accessories were what elevated Beckham’s look from blah to brilliant. Sure, the classic pairing of navy blue and khaki will get a man far, but an alluring display of accessories—ones that don’t overshadow the simple efficacy of an outfit—are key to elevating your sartorial profile this summer.

Earlier this week, Beckham and his wife, Victoria Beckham, celebrated their 18th wedding anniversary. Naturally, the footballer took to Instagram to commemorate their union and his throwback photo of the duo wearing matching leather jackets was a huge hit, racking up over 1.2 million likes. Considering this sartorial success and relationship milestone, we’d say Beckham is having a rather good week, 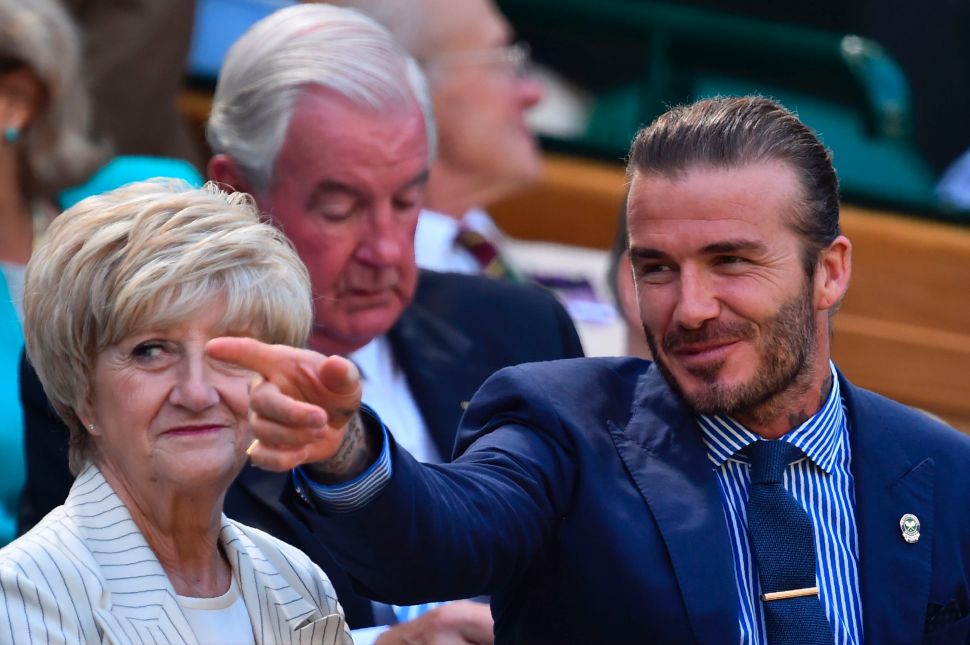