Following a tense standoff between Mayor Bill de Blasio and City Council Speaker Melissa Mark-Viverito over whether undocumented immigrants convicted of serious crimes should receive taxpayer-funded legal services, the pair announced Monday that private donors would provide funding for those services instead.

In June, Mark-Viverito inserted language into the city budget mandating that the $26 million plan to offer legal services to undocumented immigrants facing deportation include individuals convicted of one of 170 crimes that the city exempts from its “sanctuary city” protections. Mark-Viverito and de Blasio failed to reach an agreement ahead of the “budget handshake.” At the time, the mayor’s office said de Blasio can veto individual lines in the budget.

Mayoral spokeswoman Freddi Goldstein and Robin Levine, spokeswoman for Mark-Viverito, said that the mayor and the Council have agreed that city funds will help anyone who has not been convicted of serious crimes. But they noted that they secured private funding to ensure that people who are not eligible for city-funded lawyers have legal representation. The donors will provide $250,000.

“In that way, we can preserve the integrity of the New York Immigrant Family Unity Project and rescind the related term and condition previously passed by the Council,” they said in a joint statement. “Our commitment to protecting the right to due process for all New Yorkers is unwavering. We will maintain our standing as a city welcoming of all.”

They also described the step as a way to counter President Trump’s aggressive immigration enforcement agenda, which has included two blocked executive orders barring entry to people from several Muslim-majority countries that is now partially in effect as the Supreme Court is set to hear oral arguments in October, a proposal to build a wall along the Mexican border, and expanding immigration detention.

“New York City is and always will be a safe space for our immigrant communities, and no Presidential administration can change that,” they continued. “In light of the destructive anti-immigrant policies coming out of the White House, it is imperative that our city continues to serve as a beacon of hope for immigrants across the nation. Providing legal representation to those in immigration court who would otherwise face a judge without a lawyer makes a real difference in New Yorkers’ lives.”

When de Blasio announced his $84.68 billion second-draft budget proposal for the upcoming fiscal year, he said that the city would fulfill the speaker’s request that it establish a permanent taxpayer-funded stream to the New York Immigrant Family Unity Project, a pilot program that has given undocumented immigrants lawyers in immigration court. But the mayor announced that he would not permit the use of public dollars for attorneys for any individuals found guilty of one of the serious crimes.

The speaker maintained that NYIFUP should stay the same—and added terms to the program stating that, “Eligibility for legal representation provided through funds in unit of appropriation 107 for unrepresented, detained individuals in removal proceedings occurring in immigration court in New York City shall be based solely on income.”

The Council said that it would rescind these terms, and that Council funding may be used to screen detainees and determine whether they are eligible for city funds.

Adrienne Holder, attorney-in-charge of the civil practice for the Legal Aid Society, said that the organization is “grateful” to Mark-Viverito and the City Council for their “unwavering advocacy” to securing the agreement with the city.

“As we’ve always maintained, NYIFUP’s success as a right to counsel program is rooted in unrestricted access,” Holder said in a statement. “Now that the issue of a criminal carve out has been resolved, we look forward to strengthening our efforts defending New Yorkers from unjust detention and deportation.”

New York City has maintained that it is a so-called “sanctuary city” for undocumented immigrants. But immigrant advocates and activists have argued that the city will only be a true “sanctuary city” if it disavows the controversial “broken windows” policing method that targets smaller crimes to stave off larger ones. They argue that the policy disproportionately targets communities of color, and puts undocumented immigrants at risk of deportation on the grounds that federal immigration authorities have access to them when they are arrested for low-level offenses. 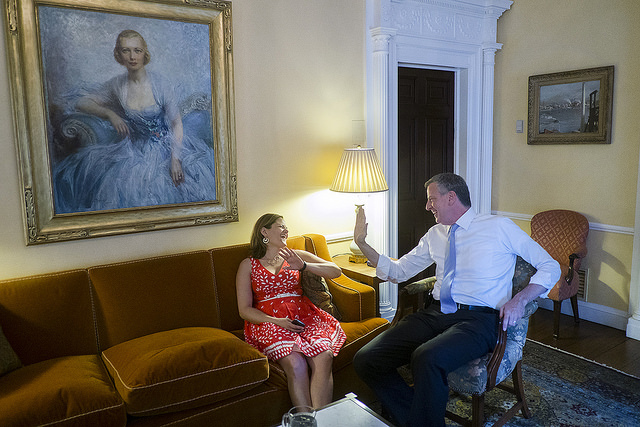