In the 2016 Democratic Party platform, the party included ending systemic racism, closing the racial wealth gap and reforming the criminal justice system in its anti-racism and pro civil rights agenda. Though the Democratic Party has held these stances for decades, it repeatedly fails to deliver in regards to these issues. The party’s inaction is due to the subtle racism embedded on the left and the infrastructures that it operates within. No group on the left is immune from this passive racism when it comes to fighting for racial justice, including establishment Democrats, progressives and even Green Party supporters.

“In order to be truly transformational and revolutionary, the ‘progressive’ movement cannot hide its head in the sand on matters of racial equity and justice,” said Anoa Changa, a progressive radio host and activist, in an interview with the Observer. “If we are to address oppression where it exists and build opportunities for the 99 percent, we cannot cherry pick which issues are of importance. This is not about weaponizing shallow statements of identity but a reflection that there are systemic issues that marginalize and oppress black people and others in this country. The current system was based on racial and economic oppression and exploitation. The two are intertwined and cannot be separated going forward.”

Several movements on the left have separated these issues from one another by ignoring racial equity and justice, rather than incorporating them into the foundation on which the left should be built upon.

Recently in Columbus, Ohio, dozens of members of StoneWall Columbus and the Columbus Pride Festival coordinator resigned in the wake of the organization ignoring that black protesters were pepper-sprayed and attacked by police at the Pride Parade for making a statement about the acquittal of Officer Jeronimo Yanez, who shot and killed Philando Castile last year in Minnesota.

That same aversion to addressing the Philando Castile verdict and the issues surrounding it afflict Democratic leadership as well. Their silence on this injustice was deafening. Hillary Clinton, despite having mothers of victims of police shootings appear on her behalf at the Democratic National Convention last year, said nothing. Senate Minority Leader Charles Schumer and House Minority Leader Nancy Pelosi said nothing. They remained silent a couple days later when pregnant mother of three Charleena Lyles was shot and killed by police in Seattle, Washington after she called the police to report a robbery. Democratic leaders—also including Sen. Maria Cantwell, Sen. Patty Murray and Gov. Jay Inslee—said nothing.

On May 25, dozens of black female activists and community leaders wrote an open letter to DNC Chair Tom Perez. “We have voted and organized our communities with little support or investment from the Democratic Party for voter mobilization efforts,” they wrote. “We have shown how black women lead, yet the party’s leadership from Washington to the state parties have few or no black women in leadership.”

Perez and the party have yet to respond to the concerns outlined in the letter.

“It is bigger than just party politics, America as a whole has refused to address and take action towards removing the barriers of institutional racism. It requires a pure, unflinching commitment that cannot waver between political expediency and the guts to do what is right. We must provide real tangible results and navigation within the political space,” said Our Revolution President Nina Turner in an interview with the Observer. “As far as my new role as president of Our Revolution, I will continue to amplify the concerns of African-Americans who like many others have been marginalized by a system that does not recognize their humanity. However, I cannot do this alone, it will require millions of people from the grassroots to the grass tops to desire a real revolution for change.”

In January 2017, Shaun King with New York Daily News reported that the GOP was doing more to hire black staff members than the Democratic Party. “Republicans in the Senate now have four African-American senior staff members and Democrats have one,” he wrote. “Not a single black woman serves on the senior staff of any of the 48 Democratic senators. Not a single African-American serves as chief of staff, deputy chief of staff, or communications director for any of the 48 Democratic senators.”

An anonymous staffer told King that even the one staffer for Democrats had to be pushed through aggressively, as these positions are often used as favors to wealthy donors.

In the 2016 election, the Democratic Party’s share of every racial demographic declined, according to The New York Times exit poll data. In September 2016, The New York Times published an article “Young Blacks Voice Skepticism on Hillary Clinton, Worrying Democrats.” Politico reported on November 1, “Weak early voter-turnout among African-Americans hurts Clinton in Florida.” On November 20, The New York Times reported on those who didn’t vote in Wisconsin: “Many in Milwaukee Neighborhood Didn’t vote-and Don’t Regret it.” In the piece, a black barber said in regards to his decision not to vote, “I don’t feel bad. Milwaukee is tired. Both of them were terrible. They never do anything for us anyway.” The Hill reported, “Voter turnout among black voters fell almost seven percentage points, to 59.4 percent, the Census figures show—after hitting an all-time high of 66.2 percent in 2012.” While voter suppression in black communities remains a common scourge on democracy in America, the fact remains that the Democratic Party has taken the support from these communities for granted. They have given them nothing in return for their loyalty, and it’s backfiring.

Instead of trying to regain their support, the Democratic Party turns its back on these communities until it becomes politically expedient to do otherwise. The Democratic Congressional Campaign Committee (DCCC) stated that the Democratic Party’s strategy is to go after moderates who voted for Mitt Romney in 2012 and Hillary Clinton in 2016. Georgia congressional candidate Jon Ossoff put this strategy to the test. Democrats poured $23 million into his campaign to legitimize targeting wealthy suburbs. Their strategy failed, but even in the wake of it’s failure, the House Democrats’ Super PAC, House Majority PAC, initiated a major project to research specifically white working class voters.

Failure to address issues facing marginalized communities—like systemic racism, the racial wealth gap and criminal justice reform—illustrates the Democratic Party’s hesitancy to change the status quo. “The great force of history comes from the fact that we carry it within us, are unconsciously controlled by it in many ways, and history is literally present in all that we do. It could scarcely be otherwise, since it is to history that we owe our frames of reference, our identities, and our aspirations,” wrote James Baldwin in the 1965 essay “Unnameable Objects, Unspeakable Crimes.” He continues, “And it is with great pain and terror that one begins to realize this. In great pain and terror, one begins to assess the history which has placed one where one is and formed one’s point of view. In great pain and terror, because, thereafter, one enters into battle with that historical creation, oneself, and attempts to recreate oneself according to a principle more humane and more liberating; one begins the attempt to achieve a level of personal maturity and freedom which robs history of its tyrannical power and also changes history… People who imagine that history flatters them (as it does, indeed, since they wrote it) are impaled on their history like a butterfly on a pin and become incapable of seeing or changing themselves or the world.”

This is the state the Democratic Party finds itself in: stuck on the assumption that it is the party that fights systemic racism. In reality, the party is complacent in changing cultural norms and even reaps the benefits from their scandals. The Democratic Party believes they are entitled to the branding of the party of minorities. Instead, they need to continually earn it by engaging black communities, speaking on issues that impact these communities and working on solutions.

In order to recover from their devastating loss in the 2016 election, Democrats need to face their blind spot and stop taking the support of these communities for granted. Democrats need to fully embrace the communities that they current exploit to differentiate themselves from Republicans. As they say, actions speak louder than words. 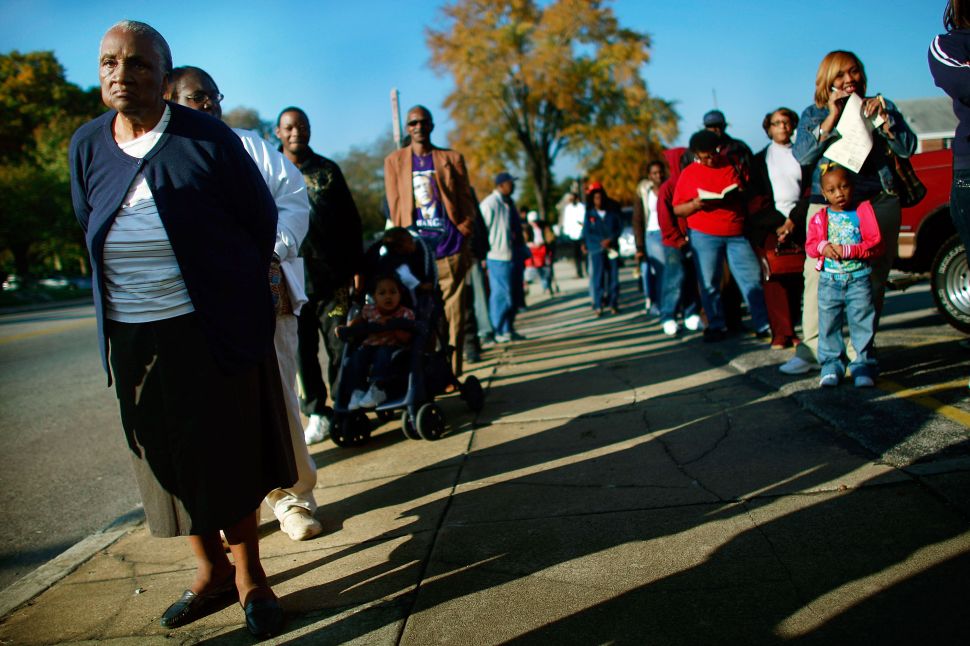