A lot has been made of the fact that this season was supposed to be something of a “soft reboot” for Doctor Who, or at least a convenient entry point for new viewers daunted by the prospect of catching up. So the season premiere (called “The Pilot”)  introduced a new companion who provided a pretext for all the necessary exposition, etc. And now that we’ve reached the end of the season, and the departure of yet another actor playing the Doctor, it is going out of its way to make this finale as valedictory as possible. Which sort of defeats the purpose of the reboot, but it certainly makes for a dramatic and satisfying finale.

The bulk of the extra-long episode, though, is given over to what is basically a standard Doctor vs. Cybermen story: The metal men are on their way and only the Doctor can save a group of vulnerable humans and their assimilation into the Cyber-collective. He evacuates the people and kills all of the Cybermen, but has to blow himself up to do it, leading to his eventual (near-)regeneration.

But making this all very different than a normal Cybermen attack! episode are three things: their location on a time-warped spaceship, Bill becoming a Cyberman, and the interaction of Missy and her former self, the Master. Let’s take each in order:

The setting of the previous episode–a 400-mile-long spaceship accelerating away from a black hole, making time move much faster on one end than the other–provides a unique environment for the battle against the Cybermen. While a thousand years passed on the lowest floor, allowing generations to build a dense city, this episode takes place about halfway down on one of the ship’s “solar farms,” where only hundreds of years have transpired and the culture is more agrarian. But since they are actually still on a high tech spaceship, Nardole is able to rejigger things so that their regular weapons seem to be effective against the Cybermen. It’s really the spaceship’s circuits exploding in concert with their guns firing, but the Cybermen believe it. It also allows for a fun scene in which a little girl throws an apple at them and it explodes like a grenade.

The time warp of the ship means that in the few days since the Doctor fled the lowest level of the ship, the Cybermen have had enough time to advance to the metal version we have come to know rather than the cloth Mondasian version. It’s certainly odd that the Cybermen have multiple origin stories in different timelines and yet they always end up looking the same, but the show deftly has the Doctor explain this as a case of parallel evolution. Cybermen are simply the end result whenever human beings are struggling to survive and decide to forcibly advance evolution by technological means.

The other issue with the time variation is that the Doctor cannot evacuate everyone via his TARDIS, because in the time that they traveled to the top level, hundreds of years would have passed on the lowest, allowing the Cybermen to advance to the point where they will be able to defeat their plans. They are basically stuck. So the Doctor convinces Nardole to take the people to the next-highest solar farm where they can live out their days in peace. It’s a tearful goodbye, with the Doctor telling Nardole he is the strongest of them, and the promise of a happy ending for Nardy despite his curmudgeonliness.

Then there is the fact that Bill has been turned into a Cyberman, which brings the real pathos of the episode. The show uses the clever technique of switching back and forth between Bill looking like she used to look and appearing as the Cyberman she actually is. A really great method of communicating the subjectivity of body horror (used prominently in the underrated if aimless Caprica), it keeps at the front of our minds the fact that, for Bill, she is still herself, even if she looks to the world like a monster.

It also, of course, allows Pearl Mackie the opportunity to act as herself, rather than a featureless robot with a mechanical voice, in what may be her very last episode of Who. It’s a lovely performance and makes me realize how much I will miss this rather short-lived companion.

Bill also gets her happy ending in the person of Heather, the star-eyed girl who turned into a -based spaceship in the season premiere. Her powers make her attuned to Bill’s tears–which as a Cyberman she should by all rights not be able to cry–and she arrives just as Bill is about to die, turning her into a creature and taking her along as she explores the stars. It feels a bit of a deus ex machine, but it is also nice to see Bill end up finding some version of what she has wanted all along.

And then there is Missy and the Master. United with her former regeneration, Missy flips into the mother of all backslides, flirting shamelessly both with her own self and with the pursuit of evil. But her tenure with the Doctor still influences her, and she spends much of the episode vacillating between them. In the hands of a less capable actress this would have come off as confused or fickle, but Michelle Gomez is a master; you can see how torn she is in every facial expression, even as she japes and cavorts as usual. The appearance of the Master has unmoored her, and now, she has no idea what her essential nature really is, or what comes next.

Sadly, the estimable John Simm loses by the comparison: Next to Gomez’s bravura Missy, his Master seems terribly one-note. Though he starts out as the episode’s antagonist, he quickly fades into the background, providing little more than a pretext for Missy’s internal conflict. (Odd, since presumably he should be able to reprogram the Cybermen, but instead somehow chooses to fight against them with the Doctor?)

The fact is that whatever else they are, both the Master and Missy are cowards. They plan to flee rather than fight, giving the Doctor an opening to once and for all give his mission statement, and for Peter Capaldi to give the best performance yet of his tenure as the Doctor. Why are you staying, you can’t possibly win, Missy protests, and the Doctor explains that he doesn’t do this to win, he does it to make a stand for what is right. And where he stands, there he will fall.

But first, Missy and the Master have to meet their end. Perhaps swayed by the Doctor’s passion, Missy chooses a side, stabbing the Master so that he will regenerate and become her. But before he transforms, the Master shoots her with his sonic, effectively ending her ability to regenerate. And barring some future intervention, this is the end of the Doctor’s first friend, killed by her/himself.

It’s also the end of this season’s major story arc, the tale of Missy’s punishment, imprisonment, and reformation. And in the end, it just all seems rather eh. Why bother with a through-line for the season whose major theme is just, people can’t really change, but maybe they can a little? Like the murder-suicide that ends their lives in a closed loop (Missy kills Master, Master turns into Missy, Master kills Missy), the whole plotline adds up to nothing at all.

And so, finally alone, having blown himself up with the Cybermen, the Doctor stumbles into the TARDIS, determined to hold back his regeneration (“I don’t want to go!” he says, quoting Ten before him.) But the TARDIS, as usual, has plans of its own. It transports him to a snowy planet, where he resists the regeneration energy long enough to spy the last person he thought he’d see: the first Doctor. And we’ll see what happens when One and Twelve meet, next Christmas. 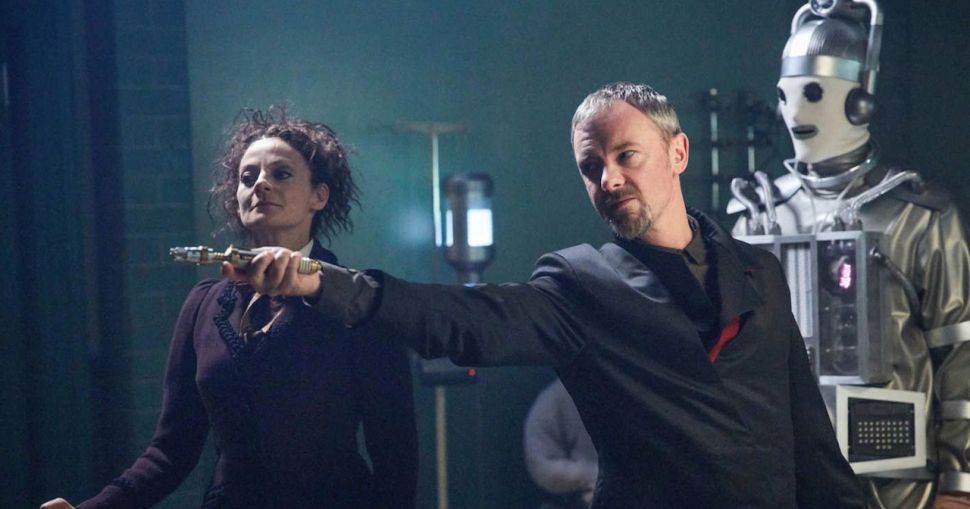