We don’t hear mere saber rattling on the Korean peninsula. Sabers are local, short-range weapons. The dreadful noise in east Asia is something far more potent: the provocative July 4 blast of a North Korean missile capable of striking North America.

These soft power gambits may have thrilled the editorial board of The New York Times, but they didn’t stop North Korea’s dictatorship. The Kim regime now has an intercontinental ballistic missile (ICBM) in its arsenal—one that threatens Anchorage, Alaska, and perhaps Pearl Harbor, Hawaii.

Alaska and Hawaii are minimalist interpretations of the 2017 missile’s range. Other experts fear the ICBM, a Hwasong-14, can reach the Canadian and U.S. west coasts.

Parts of Alaska (western Aleutians) have been within range of North Korean missiles for several years. So has Guam. There is an ongoing debate about the Taepodong-2 ballistic missile that was test-fired in February 2016. It may have had the range to hit northern California.

For the moment, the heat from North Korea’s intercontinental ballistic missile (ICBM) test remains rhetorical and its fallout political. However, Pyongyang’s nuclear weapons program will eventually produce nuclear warheads for its boosters.

For almost four decades, the Kim dynasty in Pyongyang has promised to build nuclear weapons and ICBMs. Now the dictatorship’s dream is a real world nightmare.

Since the 1990s, there have been three general options for halting North Korea’s nuclear weapons program: enforce stiff economic and political sanctions to isolate the regime; follow a “wait and see” political and military strategy played with cautious economic carrots and sticks; and conduct a pre-emptive air or missile strike on North Korean nuclear research and development sites, weapons stores, missile and air bases, and command and control facilities.

Here are the current options for the U.S. to neutralize the Hermit Kingdom’s threat. Each entails grave risks.

1.) Yet another “do the right thing” bid to Beijing. China has vulnerabilities. China’s imperial territorial expansion in the South China Sea has produced adversarial reactions. China’s other borders are anything but problem-free, and Beijing’s bullying has intensified several disputes.

The THAAD tantrum failed, and China is still processing that failure. Moon was pegged as a “peace candidate” of the timorous political stripe Beijing and Pyongyang might manipulate. He performed a brief “review” of the THAAD deployment (which he promised he would do during his campaign), but after his meeting with President Donald Trump, he declared “a unified front” against Pyongyang’s nuclear and missile programs.

Beijing has not yet adapted to South Korea’s and Japan’s new resolve. Moon is positioned to help Beijing adapt to 2017’s new reality and encourage China to finally squeeze the nukes out of the North.

In April, Trump tweeted “a trade deal with the U.S. will be far better if they (China) solve the North Korean problem!” An economic payoff? Yes, but better than a shooting war.

2.) Coercive diplomacy directed at China. In March, Secretary of State Rex Tillerson said “strategic patience” with North Korea was over and done.

China is attempting to portray itself as “the global adult” in the Trump Era and as the “go to nation” for the next Davos. However, backing North Korea utterly exposes this Chinese narrative as the sham it is. In February, Kim Jon Un’s assassins murdered his half-brother, Kim Jong Nam. The killers smeared him with a liquid nerve poison, persistent VX. In a missile warhead, VX is a weapon of mass destruction. Assassination as a geo-political advertisement that North Korea is an outlaw regime is an action no responsible nation would permit.

It gets uglier. In the U.S.-China relationship, trade politics and geo-politics intersect. Business isn’t simply business when the promise of wealth keeps China’s Communist Party in power. The United States has the economic power to damage China. Trump knows it and so does Beijing. Trump has already talked trade barriers.

The U.S. is energy independent and China isn’t. The U.S. and its allies can restrict Chinese exports and access to raw materials.

Smaller but politically irritating sanctions like denying wealthy Chinese the ability to purchase real estate in the U.S. could have political effects among Chinese elites. In the upcoming party Congress scheduled for this fall, Chinese President Xi Jinping wants to solidify his control. However, he faces internal Communist Party opposition. The U.S. could exploit emerging factions in the party elite.

Risky? Of course. It could spark a ruinous global trade war. But it is an option.

3.) The cynical trade and sell-out. The U.S., Japan and South Korea could acknowledge Chinese control of the South China Sea or they could give Taiwan to China in exchange for a denuclearized North Korea.

I don’t think the U.S. and Japan would ever seriously contemplate it.

But it’s an option and likely the “appeasement” deal Beijing wants to make.

4.) Return of serve. This is an operation that could support several diplomatic options. The U.S., South Korea and Japan could use their ABMs to intercept every North Korean test launch. They might also employ cyber warfare to disrupt tests (perhaps they have already done so). The objective of “Return of Serve” is to stymie the test program and embarrass Kim Jong Un.

5.) Decapitation. What does Pyongyang want? The murder of Kim Jong Nam suggests one key objective: to retain Kim Jong Un’s control. Encouraging a North Korean Army coup sounds great, and if you know the faction who would do it, contact CIA immediately. Targeting Kim with a missile or aircraft-delivered munitions is extremely difficult. Moreover, his death may not lead to denuclearization and attacking him would be an act of war.

6.) Delayed reprisal and the war to denuclearize. Is a pre-emptive strike reckless? This asks another question: Just how responsible is a post-emptive strike?

The Korean War isn’t over.

Donald Trump is already a Korean War president—but so was Barack Obama and every other American president since Harry Truman.

Over the years, North Korea has committed atrocities throughout Asia. The regime has murdered and kidnapped South Koreans, Japanese and U.S. personnel. North Korea’s embedded belligerency defies the laws of war. The War to Denuclearize would be less of a pre-emptive strike than a delayed reprisal.

The U.S. and South Korea have exercised what they call a 4D strategy to “detect, defend, disrupt and destroy” North Korea’s missiles.

This is a bare sketch of some of the systems that would be employed in a “simultaneous strategic bombing strike” to knock out North Korean missiles, missile launchers, storage sites, nuclear and chemical weapons sites, command and control centers, communications systems and air-space defenses.

The U.S. and its allies in east Asia have the aircraft and missiles (cruise and ballistic) to deliver at least 2,000 (likely more) precision blockbuster-sized conventional weapons within a two to 10 minute time frame on North Korea’s critical targets. The April U.S. Tomahawk cruise missile attack on a Syrian Shayrat airbase provides an example.

A simultaneous strategic bombing strike seeks to surprise the enemy, destroy his strategic weapons systems and suppress his key defenses throughout the battle area.

That is asking a lot—perhaps too much.

The U.S. and it allies must protect Seoul. North Korean artillery can bombard the northern reaches of South Korea’s capital. Military analysts debate the severity of the threat posed to Seoul by North Korean artillery deployed along the Demilitarized Zone. Some call it overrated. Perhaps, but best to suppress and destroy the artillery. North Korea’s tube and rocket artillery systems—even the ones in caves and bunkers—are vulnerable to weapons like the Massive Ordnance Air Blast (MOAB) bomb.

This is a major war, and the risks are great. But so is exposing Los Angeles to the violent whims of a nuclear-armed Kim Jong Un. 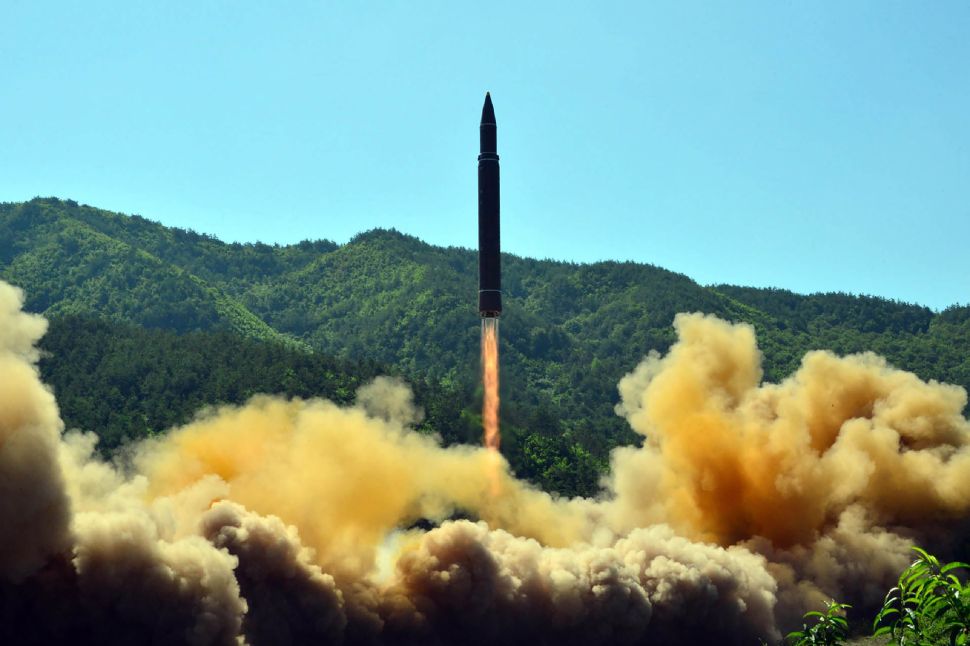