Christopher Nolan‘s films have become anticipated events in the movie-viewing community, and the same holds true for Dunkirk.

Getting a wide release this Friday, Nolan’s World War II story currently sports a 98 percent rating on Rotten Tomatoes. No, the aggregate site is not the end-all, be-all for film reception, but that score is indicative of the overwhelmingly positive reaction critics are sharing to Dunkirk.

Nolan is being praised for his deft handling of three separate but connected story lines detailing the Allied evacuation of 300,000-plus British soldiers by land, air and sea. The film’s cast—which includes Nolan familiars such as Tom Hardy and Cillian Murphy, prestige actors like Kenneth Branagh, and newcomers such as Fionn Whitehead, Tom Glynn-Carney, Jack Lowden and pop star Harry Styles making his feature debut—is also being applauded across the board.

While some critics have complained that the movie’s lack of dialogue and character depth prevent audiences from dropping an emotional anchor, the majority of reviews have lauded the film’s near-wordless approach and ability to build tension through stylistic filmmaking choices.

Here’s what critics are saying about Dunkirk.

“Nolan has for all intents and purposes conjured the British response to Steven Spielberg’s ‘Saving Private Ryan.’ If you can imagine that film’s kinetic, nerve-wracking 29-minute opening D-Day invasion stretched out to feature length, this is what it would look like. It’s a towering achievement, not just of the sort of drum-tight storytelling we’ve come to expect from the director of ‘Memento,’ ‘The Dark Knight,’ and ‘Inception,’ but also of old-school, handmade filmmaking. This is visceral, big-budget filmmaking that can be called Art. It’s also, hands down, the best motion picture of the year so far.”

“Christopher Nolan makes pop movies that aspire to be art — and vice versa — and he has perhaps never served his twin goals as successfully as he does in ‘Dunkirk.’ In telling the story of the rescue of hundreds of thousands of blockaded Allied forces in the early days of World War II, Nolan has crafted a film that’s sensational in every sense of the word; it aims for both the heart and the head, to be sure, but arrives there via the central nervous system.”

“Take away the film’s prismatic structure and this could be a classic war picture for the likes of Lee Marvin or John Wayne. And yet, there’s no question that the star here is Nolan himself, whose attention-grabbing approach alternates among three strands, chronological but not concurrent, while withholding until quite late the intricate way they all fit together. He’s found a way to harness that technique in service of a kind of heightened reality, one that feels more immersive and immediate than whatever concerns we check at the door when entering the cinema. This is what audiences want from a Nolan movie, of course, as a master of the fantastic leaves his mark on historical events for the first time.”

“Cleaving closer to Sartre than Spielberg, ‘Dunkirk’ is a stunning work of raw spectacle that searches for order in the midst of chaos. It’s the most contradictory film that Christopher Nolan has ever made, and — not incidentally — also the best. Nolan jumbling unknowns together with mega-celebrities in order to stress the egalitarian nature of being left to die. Combat experience isn’t required to appreciate how everyone fights their own war, how the grunts who got mowed down on Normandy Beach had as much to live for as the generals who sent them to the slaughter. Accordingly, ‘Dunkirk’ doesn’t judge these lads for their desperation, nor for the lengths to which it takes them. In fact, his film is enormously forgiving when it comes to the fevers of war, empathetic towards self-protection even as it celebrates the virtues of solidarity.”

“Christopher Nolan’s ‘Dunkirk’ is a stone cold masterpiece. It’s a stunningly immersive survival film told in 106 thrillingly realized minutes. Nolan puts the viewer right in the action whether it’s on the beach with 400,000 men queued up and waiting for a rescue that may never come, on the waters of the English Channel in the little civilian ship headed into hostile waters with only an aging man and two teenage boys aboard, or in the air above in the two lone Spitfires that are quickly running out of fuel. The screen and images envelope you with urgency, dread and moments of breathtaking beauty and grace as you wait with the soldiers, as the title card at the beginning says, for deliverance.” 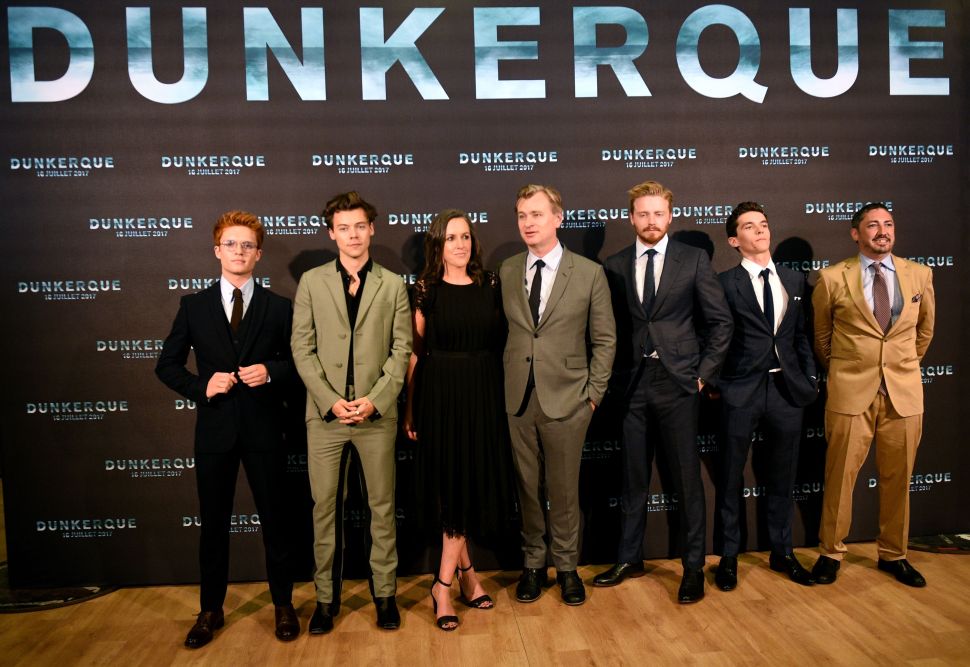