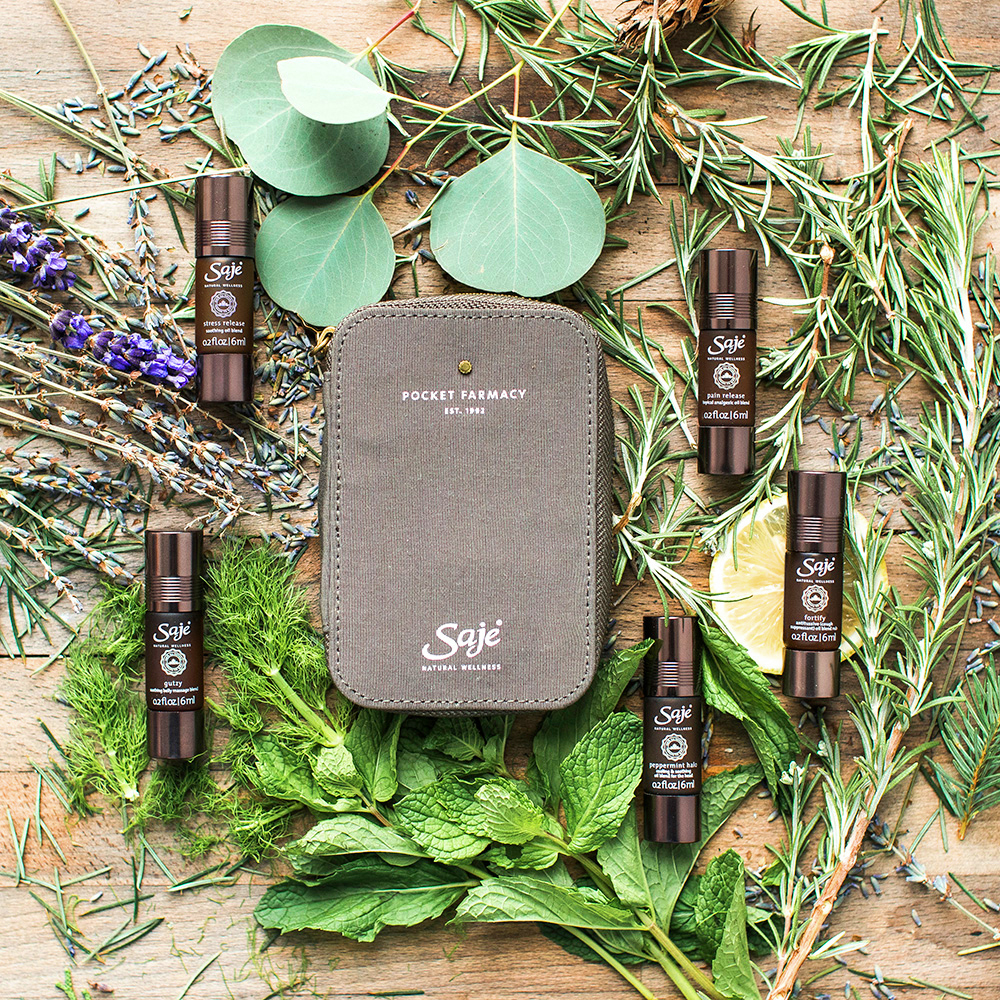 Next time you start feeling the symptoms of an oncoming headache—the pain behind your eyes, the feeling of pressure between your ears and a sensitivity to all noises—what if you decided not to reach for the Advil?

That’s exactly what Saje Natural Wellness is hoping for. It’s also why they formulated Peppermint Halo, a natural mix of peppermint, lavender and rosemary that’s intended to treat that head pain. Use the rollerball to apply the formula to the hairline and immediately reap the benefits, which calms the mind, relives headache symptoms and finishes off with a tingly, cooling effect.

It’s just one of many natural remedies that the Canadian wellness company offers as an alternative to the usual over-the-counter pills.

“We believe that plant-based medicines have the ability to deliver a ‘wholistic’ treatment, helping your body and mind truly heal, instead of just putting a band-aid or temporary solve on the issue,” explained Kate Ross LeBlanc, the co-founder and CEO of Saje Natural Wellness. The company really does cover every issue, from sleep to nutrition, muscle pain and even a formula that protects against viruses. And rather than having side effects, the Saje founders like to brag that their products have “side benefits.”

Ross LeBlanc explained: “Some of the plants in our Pain Release line that help with pain are rosemary, marjoram and cajeput. They are known to relieve muscular aches, sprains and strains and calm inflammation, and even better, they also help relieve the psychological stressors that often come with injury or pain.” While there are varying reports on the efficacy of aromatherapy, a study from University of Vienna’s Gerhard Buchbauer found that essential oils can activate the central nervous system, resulting in better sleep and sharper thinking.

Each of Saje’s remedies can be safely applied to the skin, or inhaled through the nose or mouth. As Ross LeBlanc pointed out, they were purposely formulated to be all-natural, because anything applied to the skin gets absorbed into the blood stream—a place where chemicals are not welcome. These products are also vegan, made sans synthetics and without animal testing, for a truly feel-good result. Each remedy does come with a suggested method of use, all of which follow the regulations set by the U.S. and Canadian healthcare industries, but customers shouldn’t shy away from being creative with the application of Saje products.

For example, Gutzy, which curbs stomach pain and aids in digestion, with fennel, chamomile and peppermint, is meant to be applied to the stomach. Per the label’s instructions, smother your hand with the essential oil and rub your belly in a clockwise motion. However, small amounts of the formula can also be ingested to reap the same benefits, though Saje steers clear of publicizing that recommendation. “Our community members often find new ways to use our blends and share those with others on our social media,” Ross LeBlanc admitted. However, be sure to read the instructions on the back of each Saje bottle before experimenting, as not all formulas are safe to be ingested.

For those who are still skeptical that Saje’s little bottles of scented oil could really replace Pepto-Bismol and Advil, consider the fact that the brand has been thriving since it was founded by Jean-Pierre LeBlanc and his wife, Ross LeBlanc, in 1992. Based in Vancouver and Surrey, British Columbia, over 50 Saje Natural Wellness boutiques can be found across Canada. The husband and wife duo also operate over a dozen boutiques across California and they just opened their first New York flagship, on Prince Street in Soho, with an Upper West Side location set to open in August 2017.

Happy Birthday, Canada! As a proud Canadian company, we’re excited to celebrate 150 years of heritage (plus 25 years of sharing Saje) by offering completely free shipping in North America today until July 4th at midnight! Our limited edition 25th anniversary Pocket Farmacy is waiting to celebrate with you. Thank you for helping us along our journey to #SpreadWellness, Canada! ❤️🇨🇦

The FDA has also given Saje their stamp of approval; three of their current formulas are recognized by the federal agency as over-the-counter medications, proving that they are more than just fragrant oils. That includes Pain Release, as a topical painkiller, plus Fortify and Sweet Comfort, two types of cough suppressants. In Canada, the land of Justin Trudeau, things are a bit different: “After working directly with Health Canada for almost a decade, we not only helped establish natural medicine as a category, we now have 83 products licensed with a Natural Product Number. Having a Natural Product Number means that our products’ efficacy is backed by scientific research and the recognition of national government,” said Ross LeBlanc.

A good starting point for overhauling your medicine cabinet is with Saje’s Pocket Farmacy. The travel friendly kit of five formulas has been a staple since the brand was founded in the ’90s, though, back then, LeBlanc carried the bottles of Peppermint Halo, Stress Release, Gutzy, Pain Release and Fortify around in a cassette tape kit. That carrying case has since been upgraded to a utilitarian zippered pouch, with individual spots for each of the dual-ended tubes, which feature a rollerball on one end and a dropper on the other. This kit has now been around for 25 years, providing wellness remedies for headaches, stressful moments, stomach aches and more. And considering the Pocket Farmacy has been a best seller for a quarter of a century, it must really be working. 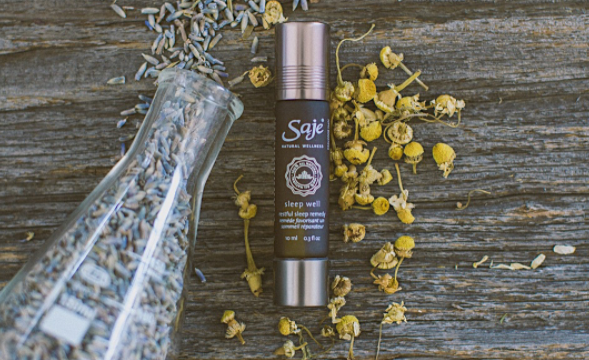