I was trying to pirate a Metallica song on Audiogalaxy in 2001 when I discovered Iron Maiden. What song I was actually trying to download, I no longer remember but the one that I found myself listening to is etched in my memory: “Hallowed Be Thy Name.”

Could I have known then, as a thirteen year old, listening to that seven minute epic about a condemned man’s last night on earth, where this song would take me? That I would see this strange band that I never heard of three times over the next seventeen years, across three different presidents? Or that contained within that song would be many of the lessons that I would use to make my living as writer?

I doubt it. But as I stood there watching Iron Maiden play last week in a sold out arena in San Antonio, next to the same friend I had first rushed to AIM to chat about my accidental discovery in high school, it was undeniably clear to me that nearly everything I learned as a writer either came from or was confirmed by this four decade old heavy metal band from East London.

As absurd as that sounds, the numbers don’t lie. There are worse bands to take as one’s model. Since 1975, Iron Maiden has produced

And their top five songs on Spotify have over 230 million streams. That’s more than Prince, that’s more than Madonna. Even pop stars are blown away by this. Lady Gaga will say to people who would call her the ‘next Madonna,’ “‘No, I’m the next Iron Maiden.’” They are, what we call in the entertainment business, perennial sellers.

The reason I admire Iron Maiden has never been about sales though. It is instead in how they achieved their success, and it would still be impressive if they’d sold 1/10 of as many records. To think that this band has thrived for all these years without radio airplay, without MTV, without really ever having been on “trend,” is almost unbelievable. Iron Maiden performed for 250,000 people as the headliners of the Rock in Rio festival—twenty-six years after the band was formed. They sell their own beer, they tour relentlessly, and they do it in a Boeing 757 piloted by the lead singer.

The reason Iron Maiden has never been a radio band and the reason the band has survived through the decades are actually the same. And it was here that I learned one of the first and most important lessons in my career as a writer. Notice: there are essentially no Iron Maiden love songs, no ballads, and few short hard paced singles—three easy ways to appeal to the masses. Instead the great Iron Maiden songs tend to be based on historical characters or great works of literature. They’ve got an 8 minute long song about Alexander the Great. They’ve got a 8 minute long song about Paschendale, one of the most horrific battles of the First World War. They’ve got songs based on lines from Shakespeare, the epic novels of Frank Herbert and the myth of Icarus. In choosing to root their music in these historical events, Iron Maiden were essentially banning themselves from mainstream radio. But this was a brilliant choice, because while almost nothing on radio lasts, is there anything more durable than the themes of Shakespeare or the Greek myths?

I remember the first time I saw a live video of “The Trooper.” Bruce Dickinson, the band’s lead singer, began it by reciting a verse of the Lord Tennyson poem it was based on,

Into the valley of death,
rode the six hundred…
Cannon to right of them,
cannon to left of them,
volleyed and thundered

And what did the crowd of young headbangers do in response to hearing a 150 year old poem at a heavy metal concert? They fucking lost their minds. I saw it in person too. It was unbelievable.

Why do I use historical stories in my books? Why do I draw from poetry and myth and quote them liberally in my writing? Because I like to, and because audiences remember stories better than fact but, mostly, I do it because of what I saw Iron Maiden do with them. I saw how the use of these great works makes the works based on them timeless and perennial. It’s very hard to do better than Tennyson or Coleridge (a poem of whose Iron Maiden has a 14 minute song about), so don’t fight it. Embrace it. Incorporate their brilliance into your own work.

Is there a formula to Iron Maiden’s work? Yes. It could probably be articulated as follows: Historical theme + slow intro + big riff + buildup to first chorus (Steve Harris bass gallop) + (1-3) guitar solo and an interlude in there somewhere = 5-7 minute bad ass song. Is it bad to stick to a formula? Um, no. Not if it works. It took a lot of experimenting to find my own style, to figure out my own formula of historical stories and approach. But once I found it, I stuck with it. Because what I learned from Maiden is that formulas compound. It creates familiarity. It creates loyalty and timelessness.

Who cares what other artists are doing? Who cares what fads are shaping the industry? As Bruce would tell The Guardian, “we have our field and we’ve got to plough it and that’s it. What’s going on in the next field is of no interest to us; we can only plough one field at a time.”

Every writer should write that quote down and live by it.

If a stranger was suddenly introduced to Iron Maiden the first thing they would notice is the imagery. “What is all this violent, scary, dark stuff?” they might say. But that’s the point: built into the music is a vivid universe of characters and artwork. The face you see most often is Eddie, who might be described as the band’s mascot. In truth, he is a sort of Zelig-like historical personification of the themes of the band’s work. The album “Powerslave” has Eddie as an Egyptian Pharaoh. “The Number of the Beast” has Eddie as the puppet master of the Devil. “Somewhere in Time” (one of my favorites) has Eddie has a sort of cyborg Terminator character. The single for “Aces High” has Eddie as an RAF pilot in the Battle of Britain.

In high school, I had an Iron Maiden shirt (still fits!) for their greatest hits album which had almost every Eddie to date on it on a single shirt. Maybe it was when I was wearing it, or looking at the merchandise at the first Iron Maiden show I went to that I first realized the brilliance of what they’d done. Not only had they built this artistic universe that enhanced the music, but in investing in the art they had created a generation of walking billboards for their work. And the billboards were so good people would pay to wear them!

With the covers of my own books, I’ve always tried to go much bigger than other authors might like to go. I don’t want to do silly clip art covers. I want iconic imagery. I want things that jump off the shelf (tell me the cover of Trust Me I’m Lying doesn’t do that). I learned from Iron Maiden that fans don’t resent the creation of products around a band—if the products are awesome, they’ll beg for them. When we created the memento mori coin based on The Daily Stoic and the print we did inspired by one of my favorite Marcus Aurelius quotes, that was a lesson I learned from Maiden. Make something awesome. Invest in delivering a ton of value. Put it out there for your fans.

There was something related to this that I learned more directly from Bruce Dickinson. I remember reading in high school that Bruce had taken time off from the band to become an Olympic-level fencer, that he’d written books, done solo stuff, had a radio show and then, as if that weren’t enough, become a professional airline pilot. A lot of writers get stuck being writers. The more they write, the less capable they become of doing literally anything else. It’s like our muscles atrophy because of the specialization. I never wanted to be that. I want to be like Bruce. I want to live an interesting life. I want my day job as a writer to, in some ways, be almost the least impressive part of who I am.

I put up some stats from Iron Maiden above, but the one that impressed me most—that impressed a lesson on me the most—wasn’t how many albums they’ve sold. It’s how many they’ve made: 16 studio albums. 42 singles. 11 live albums.

How has Iron Maiden lasted through the years? It wasn’t just by making great work—it was by making a lot of it. Think about Woody Allen—he does a movie nearly every year, and has for decades. He explained that he goes for “quantity” as a way to get to quality. “If you make a lot of films,” he said, “occasionally a great one comes out. Films never come out in the end how you expect them to at the start.” I think Iron Maiden is the same way. It was through prolificness that they created greatness. Not every song is perfect, some are forgettable. But I remember reading an old interview where other 80’s artist was making fun of Maiden in the 90’s for still putting out new stuff—just play the hits like we do, he was saying.

Thank God they didn’t listen to that idiot. Some of Iron Maiden’s best songs ever are on “Brave New World” (released 25 years after band was formed) and “Dance of Death” (28 years). Any time a writer or any artist has success, it’s easy to be intimidated by it, or to be made complacent by it or to give in to the fan’s reverence for the past. It’s better for your art and your career to put those feelings aside, to keep trucking along, to keep making stuff. You never know what’s going to come out the other side.

Artists who work hard, that’s who I admire. There is almost nobody working harder in heavy metal that Iron Maiden. In 40 years, they’ve performed more than 2,000 concerts in nearly 60 countries. That will introduce you to a lot more fans than radio ever will. Do the work. Hit the road. That’s how you build a career that lasts.

Ten years into mine, I sometimes get tired, but I know I have a lot further to go. Maiden taught me that.

Ryan Holiday is the best-selling author of Perennial Seller: The Art of Making and Marketing Work that Lasts. Ryan is an editor-at-large for the Observer, and he lives in Austin, Texas. 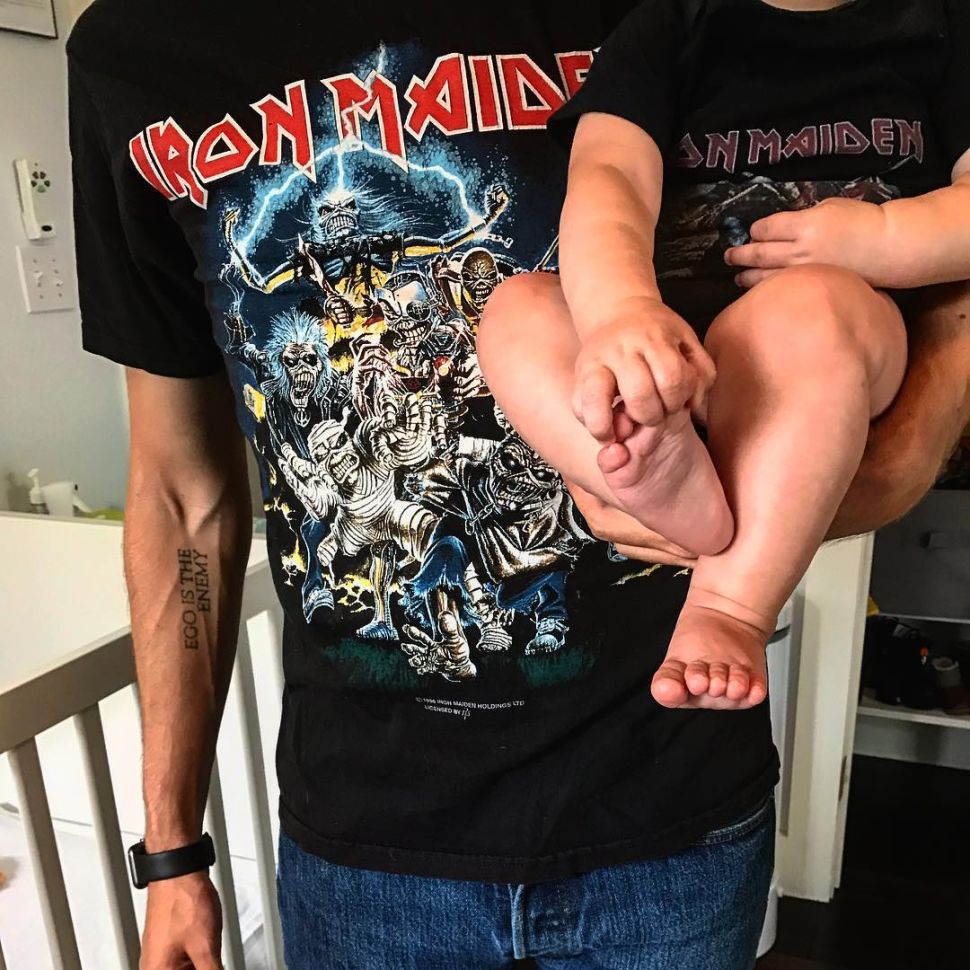