John Bartlett on Friday became the second Democrat to announce a challenge to Rep. Rodney Frelinghuysen (R-11), who has come under fire in his district due to his support for the American Health Care Act that passed the House in May, for declining to hold town halls, and for a letter he sent complaining about a constituent to her employer.

“Our district needs a representative again, and I mean representative with a small ‘R,’ someone who reflects our values,” said Bartlett, a two-term Passaic County freeholder. “Someone who goes out of his way to connect with and listen to constituents in all parts of the district and then takes action and casts votes that are consistent with his constituents’ needs.”

Several Democrats are lining up to challenge Frelinghuysen, who was first elected in 1994 but who has rarely faced more than token opposition. National Democrats see an opening to flip the seat and have made the district a top priority in the 2018 midterms.

Mikie Sherrill, a Navy veteran and former prosecutor, declared her candidacy in May and will also be seeking the Democratic nomination. Assemblyman John McKeon (D-Essex) met with the Democratic Congressional Campaign Committee this year and is considering a run.

Bartlett — a lawyer in private practice who graduated from Brown University and Harvard Law School — will forgo a run for a third term as Passaic County freeholder in order to run for Congress.

“It is exciting that people are paying attention to this race, it is exciting that we have this groundswell of activism in the district,” Bartlett told Observer. “This is going to be an exciting time, whether you are talking about the primary or the general election.”

He said he decided to enter the race because he felt that Frelinghuysen was prioritizing his political career — the congressman chairs the powerful House Appropriations Committee — ahead of the needs of his district.

“With the Democratic Party more divided than ever, crowded primary fields will spark a seismic shift to far-left policy platforms that are unpalatable to general election voters,” Martin said. “Congressman Frelinghuysen holds an unparalleled record of success in getting results for his district — and voters will reward that record once again in 2018.”

Frelinghuysen’s district in the affluent Morris County suburbs reliably leans Republican. But a 2011 redistricting made the district slightly less red when it brought portions of liberal Essex County — including parts of Montclair — into the fold. In 2012, President Barack Obama lost the district by 5 points to Mitt Romney. In November, President Trump beat Hillary Clinton by 1 point.

In May, the Cook Political Report shifted Frelinghuysen’s district to the left, from “likely Republican” to “lean Republican.” While Cook said that the main reason for the shift was the fact that any challenge to Frelinghuysen is likely to be be well funded for the first time in 25 years, the NRCC called the shift “arbitrary beltway prognostication.”

Frelinghuysen has a record of winning campaigns with significant financial backing, and he is independently wealthy, an heir to the Procter & Gamble fortune. He has hired a top GOP consultant, Mike DuHaime, to guide his campaign next year. 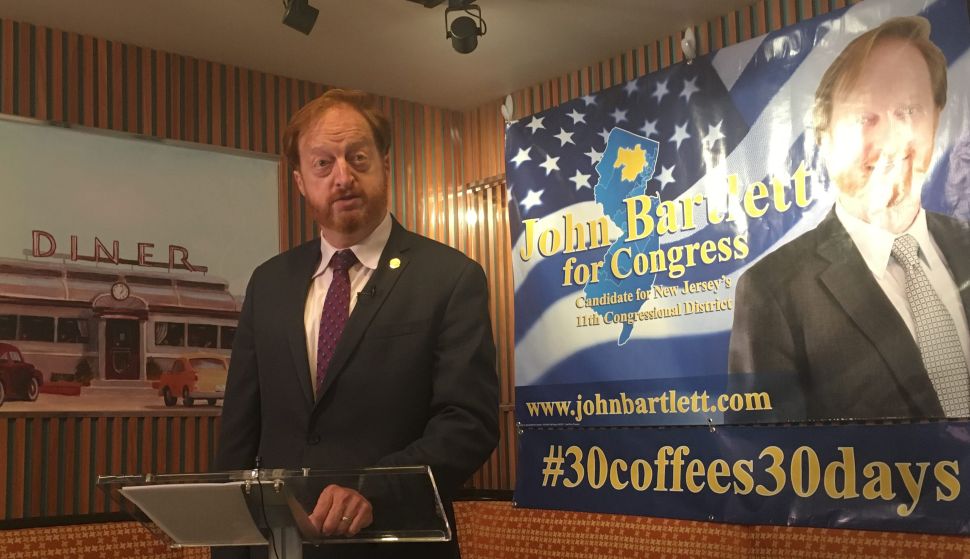