WEST NEW YORK — Lt. Gov. Kim Guadagno announced Woodcliff Lake Mayor Carlos Rendo as her running mate on Thursday, reconfiguring her gubernatorial campaign as a pitch to the large bloc of Hispanic voters in New Jersey who are not represented on the Democratic ticket.

Rendo, 53, and his family fled the Fidel Castro regime in Cuba under political exile in 1966, when he was 2 years old. He is the only Republican Hispanic mayor in New Jersey and an immigration lawyer with deep ties in Hudson County, a Democratic stronghold in New Jersey.

“As a young boy, my family was forced to flee communist Cuba and the atrocities of the Castro regime,” Rendo said Thursday at a restaurant in the heart of New Jersey’s Cuban community. “Today I stand before you as living proof that it is still possible to live the American Dream.”

As a Hispanic-American, Rendo brings balance to the Republican ticket and broadens its appeal beyond Guadagno’s core promise to lower property taxes.

Guadagno, who is of Irish descent and was born in Iowa, would be the state’s second female governor. She moved to New Jersey in 1991 after working as an assistant U.S. Attorney in New York. She served as a federal and state prosecutor in New Jersey and was elected Monmouth County sheriff in 2007 — the only woman to have held that job — and then ran twice on Gov. Chris Christie’s ticket. Her Italian last name is courtesy of her husband, Michael Guadagno, who recently retired as an appellate judge on the state Superior Court.

“Together, the Guadagno-Rendo team will bring a level of openness, transparency and responsibility that has never before been seen in the governor’s office,” Guadagno said. If elected, Rendo will oversee Guadagno’s effort to “audit Trenton,” a so-far vaguely defined plan she has put forward to trim wasteful state spending.

Democratic nominee Phil Murphy announced a former speaker of the state Assembly, Sheila Oliver, as his running mate on Wednesday. As a small-town mayor, Rendo’s government experience is not on par with Oliver’s. But the Democrats have no Hispanics running this year for prominent positions in state government — and there’s a movement afoot to oust the only one currently in a leadership spot: Assembly Speaker Vincent Prieto, who like Rendo is a Cuban immigrant from Hudson County. A deal in the works would replace Prieto with Assemblyman Craig Coughlin (D-Middlesex).

Whether Rendo can change the dynamics of the governor’s race and break into the Democrats’ Hispanic base is up in the air. Some political experts say the choice of running mates makes no real difference. And polls show that voters see Guadagno as too close to her boss, Christie, who has hit a historic low 15 percent approval rating this year. Murphy leads Guadagno by 21 to 29 points in recent surveys from Marist, Monmouth and Quinnipiac universities.

“Running mates don’t matter,” Christie said at a news conference he held around the same time as Guadagno’s announcement. “No one is going to vote for Phil Murphy because he picked Sheila Oliver, except for Sheila Oliver and her family. That’s it. And no one is voting for Kim Guadagno because she apparently has picked Mayor Rendo. Running mates have zero to do with that. What you want to do at picking a running mate is to pick someone you think can help you govern if you win and to do no harm politically.”

Christie added that he had only met Rendo twice and could not speak to his qualifications, but the governor did indicate it was refreshing to have a mayor — “not somebody who’s been part of the problem” — on the GOP ticket. (Guadagno and Christie don’t have the best relationship.)

While Hispanics tend to vote Democratic, the Cuban community has long leaned Republican. In New Jersey, however, Cuban-Americans are well represented in Congress by U.S. Sen. Bob Menendez and Rep. Albio Sires, both of them Democrats.

“I think the Democratic Party takes Hispanic voters for granted,” Alonso told Observer on Wednesday. “I think a Hispanic being chosen for one of the highest offices in the state will show people that they have options and can vote for Republicans.”

At Thursday’s announcement, Rendo addressed the crowd in Spanish, telling Spanish-speaking voters that they, too, could live their dreams. Immediately following the public announcement of Rendo as her running mate, Guadagno’s campaign sent out a press release in Spanish announcing the choice (followed by an English translation).

“My mom and dad are no longer with us, but I know they are proudly watching,” Rendo said. “There dream of a better life for their son is truly realized.”

As a child, Rendo lived in Union City, part of a region nicknamed “Havana on the Hudson” due to the high number of Cuban expats who took residence there after fleeing the Castro regime. While he now lives in Bergen County, Rendo has maintained deep ties to the area where he grew up. He works as an immigration lawyer in North Bergen as a founding partner of the law firm Mulkay and Rendo. Guadagno’s running mate announcement was held at Rumba Cubana, a restaurant in West New York about a mile away from his law office.

Rendo was also the town attorney in West New York for 12 years, something that Hudson County GOP Chairman Jose Arango said means he has the trust of many in the heavily Democratic county. And he also has deep ties in Bergen County, a region of the state that is rich with both Republican and Democratic votes.

Rendo’s law firm was admonished by the state Supreme Court’s Disciplinary Review Board in 2008 because the letterhead failed to note that one of its lawyers was not licensed to practice in New Jersey. An admonishment is the lightest form of discipline imposed by the DRB. In 1995, Rendo was appointed by Republican Gov. Christine Todd Whitman to her Ethics Advisory Council.

In 2016, while most of the state Republicans were lining up behind Gov. Chris Christie’s presidential run, Rendo went against the grain and supported Rubio, another Cuban-American Republican. According to FEC reports, Rendo donated $1,000 to that campaign in 2016.

Even after Rubio’s campaign went belly-up, Rendo remained loyal and hopeful that the Florida senator would have a bright political future. In September, Rendo co-hosted a fundraiser for Rubio’s Senate re-election campaign in New Jersey. Those fundraising ties could prove valuable to Guadagno, who has been eclipsed by Murphy in the fundraising arms race this year.

“We helped Marco in New Jersey and I’m sure Marco will come into New Jersey to help us,” Rendo said.

Guadagno called Oliver a “horrible pick when it comes to a lieutenant governor” because she has been a state legislator, and said Rendo’s experience as a mayor counted more. On Wednesday, Guadagno jabbed at Oliver for taking a trip to Cuba with other lawmakers at a time when that country continues to harbor a fugitive, Joanne Chesimard, who was convicted of killing a New Jersey state trooper in the 1970s and then fled prison. Oliver in a statement Thursday said “New Jersey’s already had eight years of the Christie-Guadagno administration — and eight is enough.”

Rendo was first elected Woodcliff Lake mayor in 2015. He added a new walking trail around the reservoir in Woodcliff Lake and joined a regional initiative to find affordable housing solutions. Rendo and his wife Michelle have three children, who were on hand for the announcement at Rumba Cubana.

Update (2:12 p.m.): Comments from Gov. Chris Christie have been added to this story. 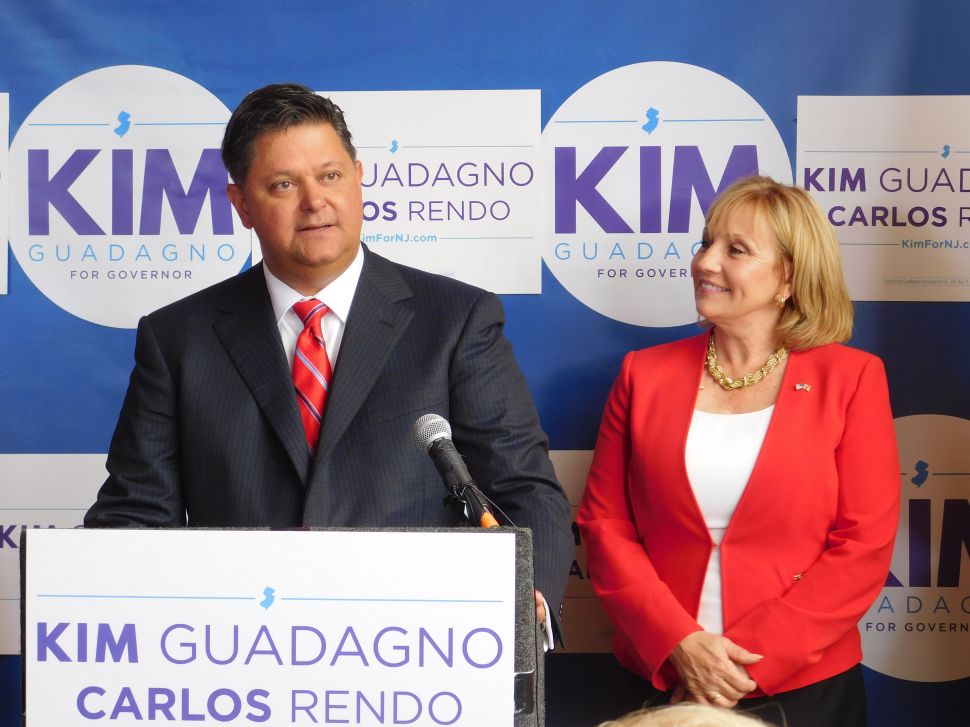