It’s taken far longer than expected, but it seems the four-year renovation of Paris’ crown jewel, the Hôtel de Crillon, was well worth the wait. From July 5 on, 10 Place de la Concorde will be the place to see and be seen in Paris, likely for decades to come.

First constructed in the 18th century in the heart of Paris, the private mansion became a hotel in 1909, when it allured the top members of society (along with quite a few celebs), thanks to its over-the-top opulence and unapologetically lavish décor. However, seeing as it’s been a few centuries since the building was first commissioned by King Louis XV, the aging Hôtel was due for a little facelift.

And that’s exactly what it got. The lobby was made lighter and more approachable (perhaps thanks to the fact that the ceilings were raised by three feet) and central AC was installed throughout. The layout of 147 rooms was reconsidered; they have been divvied out into a more spacious divide of 124 rooms, plus 36 suites and 10 signature suites.

All in all, the rich history of the hotel remains intact, with a suite still dedicated to the composer Leonard Bernstein and the gastronomique Les Ambassadeurs still in place—although it has been moved closer to the street. Here are the five most lavish details of the renovation, which reportedly cost nearly 200 million euros.

The garden contains no less than 35 different types of flora.

In what was once an unused courtyard, the Crillon has created a veritable forest in the middle of the city. This new garden is lush with the leaves and branches of 35 trees and plants. Perhaps more notably, there is a portion of this outdoor haven with a glass floor, which allows sunshine to filter down to the pool—this is the first time the Hôtel has ever boasted this amenity.

The pool, finished off with 17,600 fish-scale mosaic tiles, certainly benefits from the flashes of natural light.

Karl Lagerfeld even had his say in the design.

Commissioned to whip up two suites for the revamped hotel, Chanel‘s Karl Lagerfeld did not disappoint. Both located on the hotel’s fourth floor, these lavish rooms are Luxurious, with a capital ‘L.’ Each featuring baldachin beds, parquet marble floors and his-and-hers dressing areas, the walls of each suite are lined with photos taken by Lagerfeld himself. In fact, one room is entirely dedicated to his fluffy white Internet famous cat, Choupette—even the carpet features a design that looks like cat scratches.

However, the two ton solid Carrera marble bathtub is also a notable feature of the suites.

The L’Ecrin eatery only seats 22 diners.

Guests who are looking for an exclusive dining opportunity, without leaving the opulent walls of the Hôtel are in luck. Lead by Michelin-starred Chef Christopher Hache, L’Ecrin is an in-house culinary experience that seats less than two dozen diners each evening. Located in the Salon des Citronniers, obviously decked out in 18th century décor, Hache even worked with artisans to create the perfect china and silverware for this restaurant.

However, it’s not the only place in the Hôtel to enjoy a bite; Brasserie d’Aumont is lead by Chef Justin Schmitt and offers more casual fare, while the lounge at Jardin D’Hiver will serve bites and beverages all day long. But don’t forget, the 60-seat Les Ambassadeurs is the spot for a cocktail and a gossip.

You can sleep where Marie Antoinette once practiced piano.

If you’re intent on becoming a Queen one day, perhaps a snooze in the Suite Marie Antoinette will get you one step closer to your dreams. This exact suite happens to be where Marie Antoinette once practiced piano. Furnished with a king-size bed, a separate sitting room and a sumptuous marble bathroom, the entire space has been done in feminine hues of dove grey and pale pink.

A 150-square-foot interior terrace offers views of the hotel’s courtyard, while the larger 398-square-foot balcony offers stunning views of the Place de la Concorde. Which, ironically, is where the same French Queen was guillotined in 1793.

It took 147 art experts to rehabilitate the entire building.

As the hallowed halls of the Hôtel de Crillon are dotted with lavish paintings, opulent mirrors and, of course, plenty of gold leaf, it took quite a team to restore the most important features of the space. It took about 600 materials, including 40 different types of marble, to return this hotel to its glory. 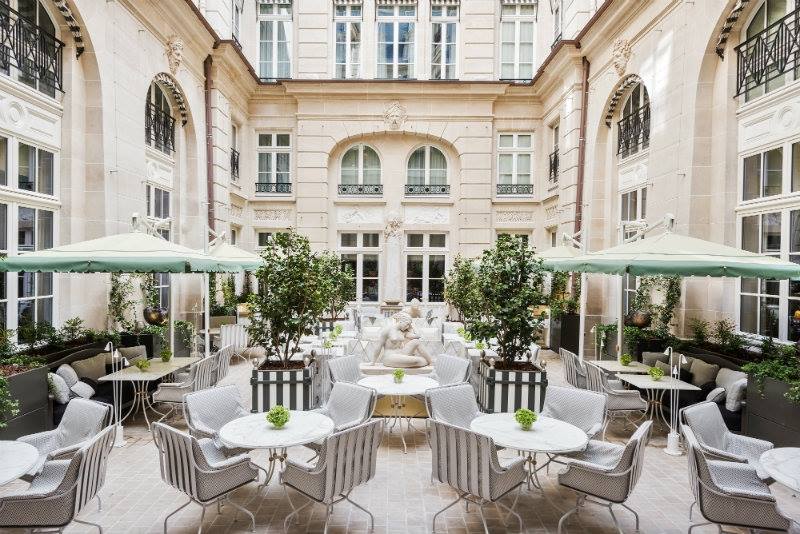