When our new president swore on two bibles he would “preserve, protect and defend the Constitution of the United States,” a revolution stirred in my heart.

As a New York City Democrat who loves her conservative Hoosier family, I wanted to hold him to his promise without breaking ties. First, I needed to hear my thoughts.

On Inauguration Day, I visited the New York Public Library’s main branch on Fifth Avenue. Desperate to quell my anxiety, I entered the great hush of the Rose Main Reading Room, known to many for its role in Ghostbusters.

Smiling, I accepted the offer of paper and a marker from O’Hara’s stash of supplies. This was exactly what I needed, a patriotic reminder of a common set of values. I settled into a heavy wooden chair, feeling goosebumps creep up my neck.

As I re-penned “We the People,” I felt calm. My 7th grade teacher made my class memorize the preamble in the 1980s. I imagined her low voice meld each syllable into a poem. Now I sensed “the Blessings of Liberty” as a fierce, fragile organism. Warmth moved into my hands and feet. My breath deepened.

When I checked my phone, verbal warfare invaded. I watched in horror as a New England acquaintance started a Facebook pile-on. “Wash out your uneducated hick mouth and go back to Arkansas,” he typed to the stranger. Fans lobbed onto the post, forgetting that an actual human being was being torn apart. But the Constitution grounded me with its inclination toward fairness. Without thinking, I switched from print to cursive, surprised I still knew how to form the letters. To my relief, I found no mention of political parties, so toxic during the 2016 campaign.

The next day at the New York Women’s March, my fear of crowds made me a pathetic protester. I emailed O’Hara, the conceptual artist I met at the library, to understand why I preferred her impromptu gathering to a mass demonstration. “Don’t make me out to be some hero,” said O’Hara, 76, who saw her event as a visual project, a way to return to basics and protest in silence. While she did not finish after six hours—predicting 14 for the whole task—the physical effort allowed her to sense how much tension went into making our laws.

Most of the Framers were wealthy. Many owned slaves and all were white men. Yet nearly everyone played a role in the Revolutionary War with more to lose than many of us with our smartphones and double lattes. Despite privileges, they were prepared to sacrifice everything to form a republic.

Centuries later, I imagine our Founding Fathers could embrace feminists like my pal Liz, a civil rights and peace activist since the 1960s. Liz reminded me that the First Amendment grants five freedoms, including “the right of the people peaceably to assemble.” But she went a step further. “We have to respect our enemies,” said Liz, an admirer of Gandhi and Martin Luther King, Jr. “Otherwise, it’s just a mob.”

Respect requires empathy. To cultivate gentleness, I copied passages before bed, moving the language through my bloodstream like a prayer. Article I, Section 8 granted powers to Congress and shared similarities to the book of Genesis. Each line was a creation: post offices, a standard of weights and measures, the production of money and the ability to declare war and to “promote the Progress of Science and useful Arts.”

My jaw tightened as I thought of my new president’s executive orders. But as I spent more time with the Constitution, I thought its language modeled a level head for civil discourse. I was moved particularly by the 19th Amendment, which states that no one should be denied voting rights “on account of sex.” Ratified in 1920, the amendment and its gender-inclusive wording felt especially fresh.

“Copying the Constitution is different from reading it,” said my library buddy, Ana, an American citizen originally from Romania. “When you see a road from the plane, you don’t see the pebbles.”

Curious about the details, I traveled to Washington, D.C., specifically to visit founding documents at the National Archives. “Take a close look at the first page,” a guard told me as I approached the Constitution. “Can you see a mistake?” To my amazement, I found an omission, a line that had been scraped and possibly covered with candlewax. Then he pointed out a childish error on the fourth and final signature page—“Pensylvania” spelled with one “n”—scrawled out by Alexander Hamilton, the man whose name would launch a smash Broadway musical. I was in love.

So was my father as I described my studies. Instead of arguing about Trump—an endless activity—we met up for a family vacation in Philadelphia, birthplace of the Constitution and the Declaration of Independence. Infused with the Spirit of ‘76, we strolled through museums and chatted with costumed actors portraying Betsy Ross and Thomas Jefferson. At the National Constitution Center, we paused at a video of a naturalization ceremony. Like couples taking marriage vows, these brave new citizens pledged the Oath of Allegiance, swearing to support and defend the Constitution against all enemies “foreign and domestic.” When the camera zoomed in on individual faces, Dad and I stifled tears.

As a natural-born American, I took my freedoms for granted. But by copying my blessings each night with my right hand, I drew a pact with God binding me to country, family and fellow patriots—however they voted.

Forty-five days into the Trump administration, I finished the last sentence of the 27th Amendment, the final law regarding congressional pay cycles. I was now a re-Framer with my own 43-page document. When stapled together end to end, the yellow legal paper trailed from my front door to my bed.

Then I started all over again with a fresh piece of paper, beginning with “We the People.” 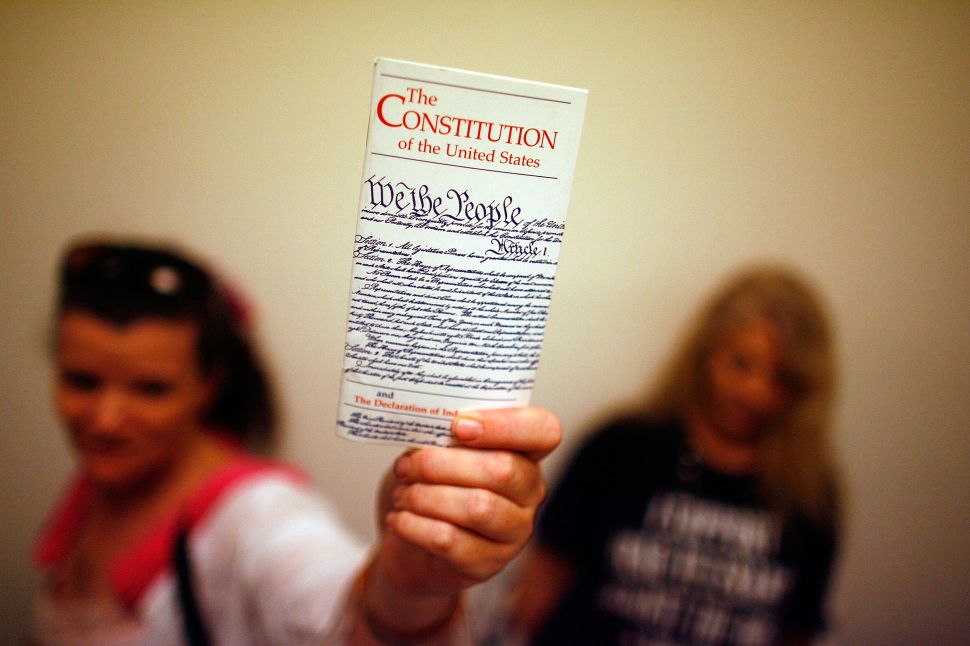