When it comes to establishing a reputation as a well-dressed person, sometimes it just takes one stellar look to prove that point. For Tamron Hall, a former anchor at NBC and MSNBC, that moment happened on April 12, when she Instagrammed an image of herself in a head-to-toe Balenciaga look.

Not only did she bravely don an off-the-runway look, including a hot pink turtleneck dress and thigh-high acid purple boots, but she truly nailed this outfit. After all, she was about to go interview Andre Leon Talley, so the former Today co-host knew that she needed to slay. In fact, Talley recently posted a pic of Hall, of her outfit for a lunch at Fred’s. “She should be in films! I know she is an incredible beauty and brilliant,” he wrote in the caption.

Despite her departure from early morning news, it seems Hall will soon be making many more fashionable appearances, as it was just announced that she is co-creating a daytime talk show series with Weinstein Television. Being the incredibly talented television star that she is, Hall will be the executive producer of the show, in addition to being the host. According to Variety, the show will focus on “current events, human-interest stories and interviews with celebrities and newsmakers,” but with a heartfelt tone. It kind of sounds like Hall is vying to become Oprah 2.0, right? No matter, we hope she also uses her new television platform to serve up quite a few fashion moments, as she has been known to do.

In celebration of her new role, here are some of Hall’s best looks from the past few months:

This polka-dot pantsuit is fun, but it’s also a pre-fall outfit from brand of the moment, Monse. It was a powerful but sexy look, perfect for attending Redbook‘s MVP Beauty Awards. She was rather candid with the crowd at the event, telling them: “There are days when I don’t feel like wearing makeup, but I never leave the house without a bit of mascara. I mean, I wake up looking like a black Bart Simpson.”

These bows might be sweet, but the reason why Hall wearing this Roksanda dress in Seattle is even sweeter. She was on hand for Points of Light, a conference that focuses on volunteer and service work. According to Instagram, Hall’s mother helped style this outfit.

A gift from Kirna Zabete, this La Double J frock, printed in various hues of green was traffic stopping. Well, technically it was bike traffic. This voluminous shape was also rather ideal for Hall to spend an entire day eating and drinking through the Aspen Food and Wine Festival.

Lest you thought Hall would stop at just one amazing outfit in Aspen, she pulled out this electric yellow number from Delpozo. The off the shoulder top proved that highlighter yellow can be sexy, while those roomy khakis were forgiving enough for yet another visit to Colorado’s premiere grub festival.

Proving that she has a sense of humor, in addition to stellar taste, Hall captioned this photo: “Trash & Boujee.” Garbage aside, this is truly a high fashion look, with a dress by Natasha Zinko and playful gold hoop earrings from Loewe.

When one wears a voluminous Rosie Assoulin dress, one must playfully pose in it. Good thing Hall did just that. And the stylist credited for this look? Her little chihuahua, May Luv, whose dedicated hashtag is #officialMayLuv.

Hall clearly has an eye for young designers. Case in point? This graphic black and white dress from Isa Arfen, a line designed by Serafina Sama, who was born in Italy, but is now based in London. The designer recently clinched a grant from the BFC, so expect to see more from this young talent, who clearly knows how to make getting dressed look fun. 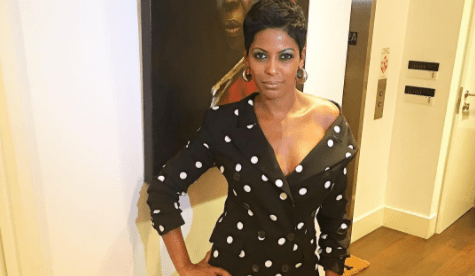