The last year or so has felt like a constant #TBT to ’90s fashion with chokers, high-waisted mom jeans, wedge sandals and spaghetti straps all making a comeback. It makes me wish I’d hung onto certain items from my teen closet for the resale value. And it isn’t just the runway that is looking to this decade for inspiration. TV shows such as American Crime Story: The People v. O.J. Simpson and Halt and Catch Fire have been revisiting this era, and Jenny Slate’s new film, Landline, is also basking in that mid-’90s glow.

Landline reunites Slate with her Obvious Child collaborators, writer and director Gillian Robespierre and producer Elisabeth Holm. And once again we find Slate’s character at a crossroads, exploring the dynamics between mother and now grown-up daughter; infidelity the catalyst here, rather than pregnancy. When Dana (Jenny Slate) finds out her dad, Alan (John Turturro), might be cheating on her mom, Pat (Edie Falco), her own relationship is thrown into disarray. I spoke with Landline costume designer Elisabeth Vastola about these interconnecting relationships, and how she uses clothing to show familial bonds in a way that is rarely presented on screen. She also shared her favorite outlets for rejuvenating your 1990s wardrobe.

After some initial tech trouble that almost had me resorting to my landline for the call (very on theme) I was eventually able to connect with Vastola (who is currently working on season 2 of Jessica Jones). Despite my protests (it makes me feel old!) we both concluded that, as hard as it is to believe, ’90s clothing passes for vintage these days. I asked Vastola how this impacted her research and what kind of resources she used. Rather than big pop culture denominators of 1995—Spice Girls, Friends, or Clueless, for example—she looked much closer to home. Ropespierre, Holm, and Vastola were all living in New York City in 1995, the setting for Landline, so her first inspiration was their collective, first-hand experience.

“I definitely had pop culture in mind, although I try mostly stick to photos and stories, and articles about real people, as opposed to characters from the time,” Vastola says. “Sometimes it feels tempting to look back at your favorite TV shows, works of art and movies as reference, but actually it is more helpful to go a step further and to find either documentary photography, photo albums or yearbooks to get a better sense of what everyday fashion looked like.”

You don’t want a sea of Rachel haircuts or Cher Horowitz plaid skirts if it isn’t right for the characters in question. Vastola describes Dana’s style as “a little bit more square and a little bit more conservative,” particularly in contrast to the character’s co-workers at Paper magazine. Vastola adds that “She’s not specifically expressing herself through fashion, [she’s] feeling comfortable and like she fits in, in the world.”

Using a real magazine rather than one of the many fictitious titles that have popped up in films (hello, Poise, Scarlet, Mode, and Runway) gives the audience an instant idea about the environment in which Dana works. “[Paper] is not a fashion magazine per se, it’s more of a cultural publication,” Vastola says. “So we wanted to make sure that everybody there felt unique and different. Not necessarily ahead of the curve in terms of what was coming down the runway, but that they all had their own little idiosyncrasies and it still felt like downtown Manhattan cool.”

At it’s core, this is a movie about family. When Dana returns home after feeling adrift from her boyfriend Ben (Jay Duplass), her clothing choice (and that of those around her) reflects this shift in dynamic.

“One storyline within the movie is two siblings reconnecting. There are subtle ways in which Dana starts to dress a little bit younger and a little bit more like her sister. When you go back home you start to rediscover things that have been living in your closet. You try on and wear things that actually belong to your mom or your sister. There’s a lot of sharing clothes between the family, especially between Ali (Abby Quinn) and Dana.”

Costume designers are usually expected to establish separate closets for each character in a production, so this type of clothes-swapping isn’t often seen on screen. But Vastola relished the change, saying, “I really liked having the freedom on this project to allow it to be a little more fluid.” An emotional conversation with Ben, for example, sees Dana clad in her mother’s bathrobe.

Pop culture was not totally absent from her inspiration, however. The Greenwich Village Halloween Parade sequence sent Vastola searching for a slew of 1995-appropriate Halloween costume ideas. Keep an eye out for Ace Ventura. And while the character of Dana is pretty straight-laced, Ali is the wild child, so for her party attire Vastola looked to old press release videos clubs like Limelight that she found on Youtube. Esty and eBay were another resource, as was the Picture Collection at the New York Public Library, which she describes as “literally a library of photos from all different walks of life, all different years.”

During shooting last summer, Landline a figure that was often in headlines then, and during the time period in which they were working, was Hillary Clinton. The character Pat watches then First Lady Hillary Rodham Clinton speaking at the U.N. in the pinkest of pink suits. “I don’t think there’s any moment in the script where Pat says “Oh, I admire Hillary Clinton,” but you see her watch this clip and then the next day or so she’s wearing something similar,” Vastola says. “It tells so much. It is really wonderful from a designer’s perspective to be able to use costume in that way.”

You might not want to pull a Pat and buy a very pink suit, but for a great place to shop for ’90s styles Vastola recommends L Train Vintage. With a number of locations around New York City (and an online shop), they’re cheaper than most thrift store prices in her expert opinion. Something we can all definitely get on board with. Her last tip for ’90s fashion finds is much closer to home. “We were able to raid our parents’ closets and find the stuff that has been sitting up in the attic. It was a fun extra part of sourcing” she adds. 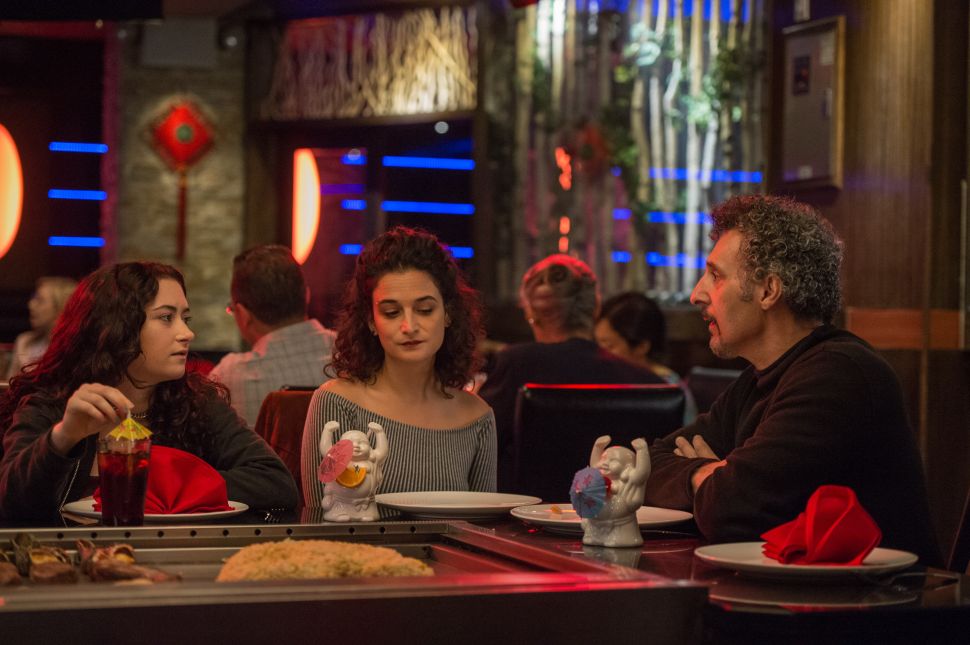