So the gimmick of the year has come and gone, with predictable audience and—I assume—financial success. Also predictable were the mixed artistic results. The 50th anniversary of Balanchine’s Jewels! In the very theater in which we first saw it (then the State, now the Koch, tomorrow the Trump?)! The New York City Ballet! The Paris Opéra Ballet!! The Bolshoi!!! A mix-and-match: Only the French doing the French “Emeralds” (Fauré) and the Russkis and Yanks trading “Rubies” (“jazzy” Stravinsky) and “Diamonds” (19th-century Russian high classicism à la Tchaikovsky). Let’s all agree to ignore the fact that although Jewels is now performed here, there, and everywhere, it’s only here that Balanchine’s style of dancing is engrained. You can’t teach Balanchine style to French dancers or Russian dancers or British dancers in a few weeks, no matter how proficient the stagers and coaches sent out by the Balanchine Trust may be. They can teach the steps, but for the most part they can’t instill the essence.

This was all too clear in “Emeralds”. The French style is elegant, suave, glamorous—and self-conscious. “Look how my beautiful foot is arched!” “What about this gorgeous arabesque?” And the foot is beautiful, and the arabesque is gorgeous. But Balanchine is about the music, about the subtleties of phrasing, not about narcissistic self-presentation. Laëtitia Pujol, a celebrated étoile of the company, gave what I can only call a disgraceful performance of the great solo Balanchine made for a very different kind of French ballerina, Violette Verdy, as musical a dancer as we have ever seen. Pujol wove little personal dramas into it; simpered; gave it little adorable accents. I wanted to swat her. Another étoile, Dorothée Gilbert, was less egregious but lacked the subtlety, the inner glow that Verdy (and others at City Ballet) have brought to this lovely study of a woman projecting a glowing inner awareness of her femininity. Only Myriam Ould-Braham as the second female lead in the Pujol cast—the girl in the famous “walking duet”—projected Balanchinian musicality. The two lead men were both handsome, lithe, long-limbed—and French.

As for “Rubies,” the Bolshoi cast I saw gave it the worst performance I’ve seen in half a century—and I’ve seen it perhaps 30 times. Someone told them it was jazzy, but it certainly didn’t occur to them that “jazzy” entails syncopation. The male and female leads—it’s painful to recall the greatness of the originals, Villella and McBride—were grim, plodding, mechanical. Far from wittily sharing with us their pleasure in dancing with each other and in competition with each other—their joy in the risks and high jinks Balanchine gave them to play with—neither of them seemed remotely aware that the other one existed. And the tall, beautiful girl in the astounding big-girl role was simply not cut out to be a dancer.

In contrast, the City Ballet cast, with which we’re very familiar, brought back a touch of the fun and the thrill. Megan Fairchild has gained confidence since her Broadway stint in On the Town, and she is isn’t depending on her wee cuteness the way she used to; she and the whiz-bang Joaquin De Luz amped it up and vamped it up (how he does it at 41 I can’t imagine). But Fairchild doesn’t really possess the subtly or the physical qualities for the “Rubies” girl—she’s too small-scale. (Patricia McBride was small, but you never knew it; her arms and legs and neck were perfectly proportioned, her feet an amazement.) As for the big girl, Tessa Reichlen has informed us that it’s her role, and she’s right.

Finally, “Diamonds.” It’s always a surprise how this quintessential Suzanne Farrell role can look so good on so many un-Farrellish types. That’s a tribute to its true classicism: it can adapt, whereas the Villella-McBride highly personalized style is almost impossible to replicate. The City Ballet “Diamonds” was led by Sara Mearns, whose way is far from the Farrell way—she lacks Farrell’s grandeur, her “assoluta” quality—but who has perfected her own kind of smaller-scale intensity. Her approach to the role is through Swan Lake—Odette informs her “Diamonds” performance from start to finish. And why not? Odette is one of her real successes. Here she’s in her comfort zone, so there’s no suggestion of her characteristic lack of measure, her habit of abandoning herself to her talent rather than harnessing it. This was the happiest I’ve ever been at a Mearns performance. Her sterling partner, Tyler Angle, is never a dominant presence—he’s not Peter Martins—but he not only provides perfect support, he’s quietly effective in the few starry moments the role provides. Alas, the corps looked ragged, bored and under-rehearsed.

Not so the Bolshoi corps in their “Diamonds,” which came brilliantly alive. This “Diamonds” really glittered. Yet everything in this performance paled in comparison to the ravishing splendor of 18-year-old Alena Kovaleva in the lead role. It was her debut—for all I know, the first time she’s had such a major opportunity in anything. She’s tall, dark, willowy, beautiful. And she’s technically impressive, but you hardly notice because she’s so winning, so gently secure, so obviously happy to be dancing. If she was nervous, it didn’t show. If she was daunted, you’d never know it. She wasn’t Farrell, she wasn’t Odette, she was a magical new creature. The audience had never heard of her, but from her first moment, there was a collective holding of breath, and at the end, a wild, heartfelt ovation; really, a burst of love. Gimmick had been transformed into glory. 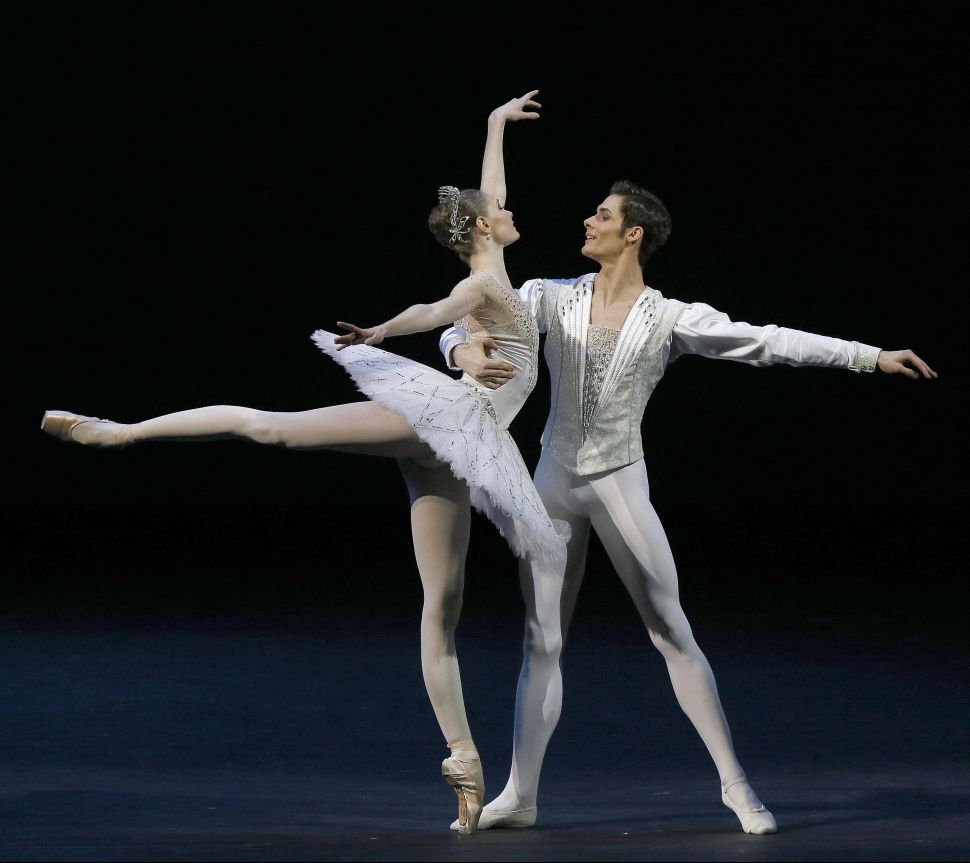