When a politician takes time out of a busy event to kiss a few babies, it’s considered thoroughly trite. But when Justin Trudeau hoists a child into his arms to commemorate the moment, it merits a celebration…at least on social media. The Canadian Prime Minister celebrated La Fête Nationale and Saint-Jean-Baptiste Day in his home province by posing with babies, then celebrated Pride in Toronto in a similar way.

The Prime Minister is comfortable with kids—he has three of his own, Ella-Grace, Xavier and Hadrien, who he showed off on social media to celebrate Father’s Day, calling them “the best buddies I could ever ask for.” Trudeau’s Instagram presence reveals he’s taken fatherhood to the next level. From building pillow forts to posing with a mini Wonder Woman, he’s quietly attempting to boost his struggling approval rating one photograph at a time.

The PM is so devoted to his children that he brought son Hadrien with him to work in May for Take Your Child to Work Day, where the younger Trudeau conducted important business, including meeting with the caucus, running through the halls and exploring his father’s office.

Trudeau has also been snapped by his wife painting with his children in pajamas, skiing with the family (perhaps they could have embarked on a group excursion with Prince William during his lone ski trip, once Prince George recovered from refusing the PM’s high five).

Wonder Woman is on site for #Prideto #toronto @PrideToronto pic.twitter.com/t4cWuKZlMG

While Trudeau might at times be controversial, at least this is one thing people can agree on—almost all babies seem enamored by him (except, of course, for one notable royal one). 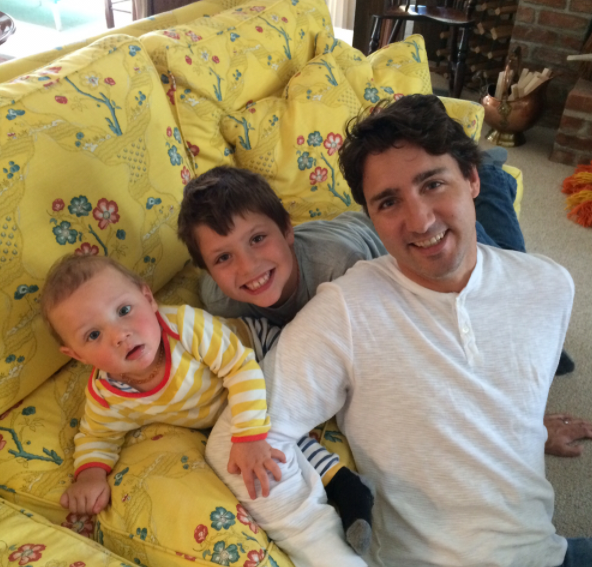