No but really—do we seriously have to do this again? A massive iceberg, which may be the biggest ever recorded, just snapped of Antartica and is adrift at sea. It’s 2,200 square miles in area and weighs a trillion metric tons. It’s the size of Delaware and twice the volume of Lake Erie, so I am going to say it’s officially time to be alarmed.

A team of researchers at Swansea University’s Project MIDAS have had their eye on the crack that led to the break-off for the last decade. In 2004, a report warned continued warming could lead to its breakup within the following decade. The team then reported rapid advances of the rift this past January, May and June and recently warned the section of ice was “hanging on by a thread.” Using imaging from NASA’s Aqua MODIS satellite instrument, the scientists observed the C-shaped section of ice “calved” off sometime between Monday and Wednesday.

The remaining shelf of ice has “reduced in area by more than 12 percent, and the landscape of the Antarctic Peninsula changed forever,” reads a report posted today by Adrian Luckman, the project’s lead investigator, and Martin O’Leary, another team member.

“The iceberg is one of the largest recorded and its future progress is difficult to predict,” Luckman said. “It may remain in one piece but is more likely to break into fragments. Some of the ice may remain in the area for decades, while parts of the iceberg may drift north into warmer waters.”

The researchers are unsure of what this means for Antarctica, sea levels and the planet. While ice shelfs in Antarctica crack often, the sheer size of this break is garnering attention amid a climate change conversation that’s heating up. The ice was already floating before it calved away and thus will not have an immediate impact on sea level. But if the shelf loses much more of its area, it could result in glaciers speeding up their passage towards the ocean, eventually impacting sea levels.

“Although this is a natural event, and we’re not aware of any link to human-induced climate change, this puts the ice shelf in a very vulnerable position,” O’Leary said. “This is the furthest back that the ice front has been in recorded history. We’re going to be watching very carefully for signs that the rest of the shelf is becoming unstable.”

Luckman added, “Our models say [the remaining ice shelf] will be less stable, but any future collapse remains years or decades away.”

At least we have a few years. 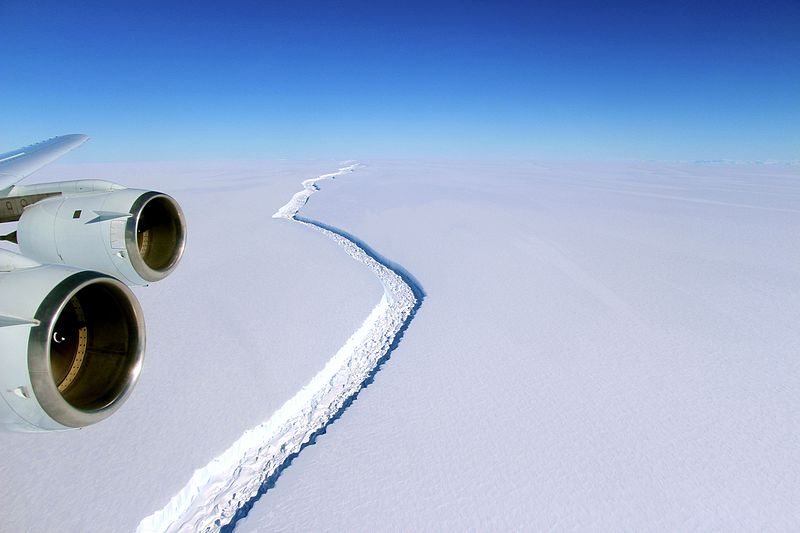