Because Republicans hold a majority in both houses of Congress, activists and organizations have relied on litigation as an avenue to hold the Trump administration accountable. In May 2017, the Boston Globe reported that Donald Trump had been sued 134 times in federal court since he took office—three times more than his predecessors had been sued at similar points in their presidency. The report noted, “The lawsuits include green card holders trying to get into the United States after his travel ban on seven majority-Muslim countries; cities like San Francisco, Richmond, and Seattle suing over a plan to withhold funds from ‘sanctuary’ cities; and even a woman from Quincy, Mass., who went to court contending that the president’s actions have caused ‘loss of enjoyment of life.'”

Immediately following Trump’s inauguration, Citizens for Responsibility and Ethics in Washington (CREW) filed a lawsuit against Trump citing that he violated the Emoluments Clause of the Constitution, which stipulates that elected officials cannot receive anything of value from foreign governments and businesses without congressional approval. By June 2017, most Democrats in the House had joined in support of the lawsuit.

Earlier this month, several Twitter users Trump had blocked filed a lawsuit alleging the platform is a public forum under the First Amendment and that the president cannot prevent users from viewing official government announcements, i.e. his tweets.

Twenty-one people are currently in the midst of litigation filed against Trump and several of his administration officials over climate change. The Washington Post reported in March 2017, “Environmental groups say the case—if it’s successful—could force even a reluctant government to reduce greenhouse gas emissions and take other measures to counter warming.”

The Center for Biological Diversity has filed 26 separate lawsuits against Trump and his administration. Some of the lawsuits include litigation against pollution, pushes to halt federal wildlife killings, an effort to reverse Trump’s decision on Arctic drilling, and demands for transparency in several different cases like the Border Wall proposal and the Keystone XL pipeline.

In June 2017, the state of Maryland and the District of Columbia filed a lawsuit similar to the Emoluments Clause lawsuit over Trump’s private businesses and his refusal to properly sever ties and disclose conflicts of interest in regards to them. In July 2017, a government watchdog organization run by former Obama administration lawyers filed a lawsuit against Trump and several of his political advisers over hacked Democratic Party and Clinton Campaign emails that were released during the 2016 presidential election.

Stemming from an incident at one of Trump’s campaign rallies in Kentucky in 2016, three protesters filed a lawsuit claiming that Trump instigated his supporters to assault them. On July 24, Politico reported that Trump’s lawyers have asked an appeals court to dismiss the lawsuit. The protesters added a clause in the suit demanding that Trump release his tax returns, adding to the several Emoluments Clause lawsuits that have also included requests for his tax returns as part of the litigation. The Electronic Privacy Information Center is trying to force those returns to be released directly from the IRS through an FOIA lawsuit filed in April 2017.

Journalists are trying to use the Freedom of Information Act to hold the Trump administration accountable, but government agencies have refused to release requested documents. In June 2017, Operation 45, an organization created after Trump won the presidency, filed a lawsuit against the FBI demanding the release of files they have on Donald Trump. The FBI denied the request stating that it would infringe on Trump’s privacy. The same month, CNN filed a lawsuit against the FBI to release Comey’s memos on Trump.

Trump’s increasing unpopularity and aversion to transparency and accountability ensures that his presidency will continue to face an onslaught of lawsuits. In part explaining the explosion of legal action against Trump is that he signed 96 executive orders in his first 100 days in office. In their first 100 days, Bush signed 36 and Obama 35. Because Democrats are the minority party in Congress and state legislatures across the country, legal action provides a valuable avenue to resist Donald Trump and Republicans. 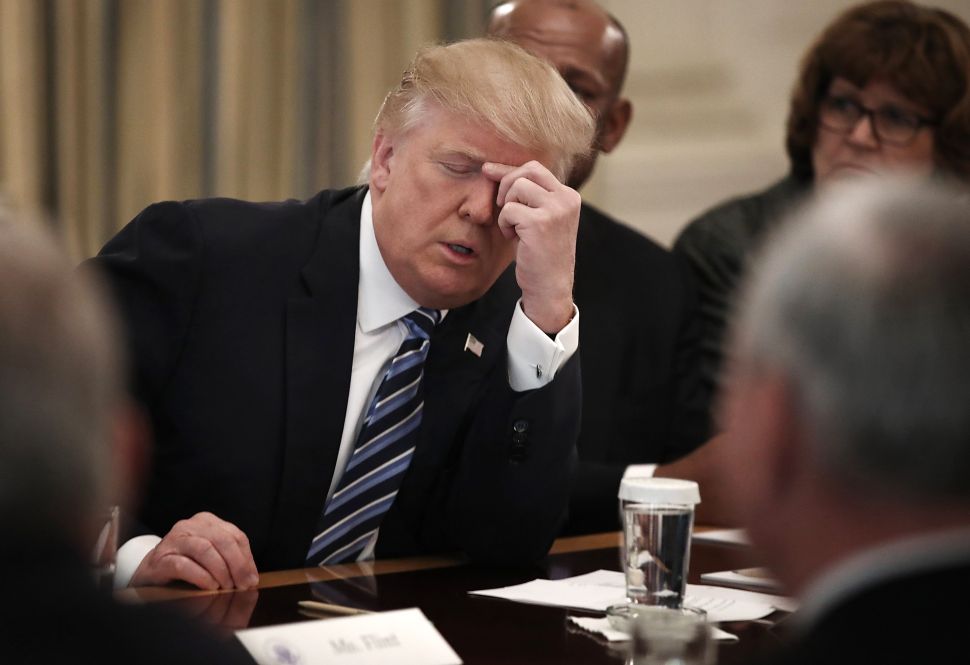