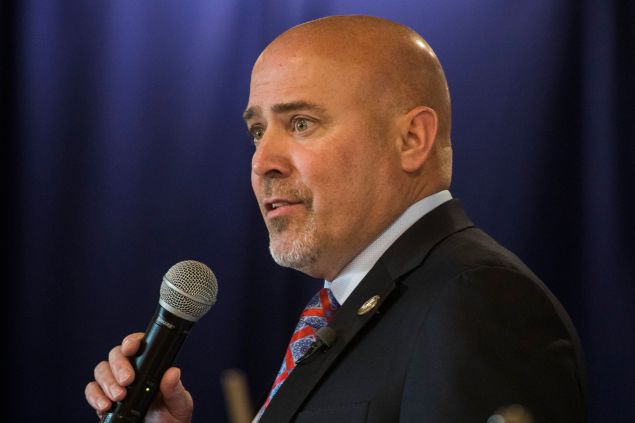 Scaramucci, who joined the Trump administration last week, had a lead role managing the firm but left it in January. SkyBridge Capital is now in the process of being sold to a group of companies led by HNA Group, a Chinese conglomerate that has drawn scrutiny for its opaque ownership structure. Scaramucci announced the sale days before Trump’s inauguration in January, but U.S. regulators have delayed the deal.

News reports have honed in on the sale since Scaramucci stands to make money from the foreign transaction. He also drew attention to the deal on Wednesday when he accused White House Chief of Staff Reince Priebus of leaking his personal financial disclosure to the press in a cryptic tweet he later deleted. (He has since made a big splash for his rather colorful remarks to the New Yorker about Priebus and Trump strategist Steve Bannon.)

MacArthur owns between $1 million to $5 million in SkyBridge assets, according to a 2016 U.S. House financial disclosure form. He hasn’t reported selling his stake in the company as of May this year.

It’s a relatively small share in SkyBridge. By contrast, Scaramucci’s 45 percent stake is worth roughly $80 million, according to reports. By that measure, MacArthur would have, at most, a less than 3 percent stake in a $177.8 million company.

HNA, the potential SkyBridge buyer, has been criticized for its mysterious ownership. Wall Street firms including Bank of America, Citigroup and Morgan Stanley have mostly steered clear of HNA because they can’t get internal approvals from “know your customer” committees, according to Bloomberg. The New York Times dubbed the company “shadowy” in a lengthy article published Wednesday about an unusual $18 billion donation HNA made to a New York charity.

A MacArthur spokesman didn’t answer whether the congressman thinks it’s appropriate for SkyBridge to be sold to the Chinese conglomerate in a statement Thursday.

“Rep. MacArthur has been completely open and transparent with his investments since he first ran for Congress,” MacArthur spokesman Chris Russell said. “Tom was re-elected twice with double-digit margins in a district President Obama won twice. Voters care about issues that affect their lives. This isn’t one of them.”

The Committee of Foreign Investment in the United States, which reviews acquisitions and investments for national security risks, still hasn’t approved the SkyBridge-HNA deal. However, there are no indications the SkyBridge review is irregular, sources told Bloomberg. In April, CFIUS decided that an investment by HNA in a Los Angeles-based entertainment company presented “unresolved national security concerns,” Bloomberg reported, though the committee has approved other HNA deals.

MacArthur is being targeted in advance of the 2018 midterms by national Democratic groups. Andy Kim, a Rhodes scholar and former adviser to President Barack Obama on terrorism, Iraq and ISIS, has launched a campaign to unseat MacArthur in South Jersey’s 3rd congressional district. The Democratic Congressional Campaign Committee has said it will take an active role in the race, seeking to tie MacArthur to President Trump and a Republican bill to repeal and replace the Affordable Care Act, which MacArthur had a lead role in getting through the House.

Democrats have gone after MacArthur’s foreign investments in the past. In 2014, New Jersey Democrats attacked MacArthur for “profiteering from direct investments in foreign oil,” according to a Democratic State Committee news release. The attack apparently didn’t stick. MacArthur won that race by 10 points. The congressman made millions in the insurance industry and spent around $5 million of his money on his first run for Congress.