Making sense of conflicts—especially those in the Middle East—is a complicated endeavor. If it were easy, there would be peace.

One of the reasons peace in the Middle East is so elusive is that we in the West, the self-appointed brokers of the peace process, have a very different understanding of what’s important and what’s incidental than the people who live in the region do.

The current conflict over metal detectors at the Temple Mount in Jerusalem is the perfect example.

The Temple Mount, also known as Har HaBayit or Haram al-Sharif, is an important site for Judaism, Islam and Christianity.

For Jews and for Christians, it is the site where Abraham brought his son Isaac to be sacrificed. According to Genesis 22, God intervened through an angel and Isaac was saved. It was a test of faith. This was where monotheism and the halting of human sacrifice began.

It is where, years later, King David, the second king of the Israelites, created his capital. It is for that specific reason that his son Solomon chose the site to built the Holy Temple for Jews.

Islam, in the Koran, tells the same story with a slight switch. Abraham is called Ibrahim and instead of bringing his son Isaac, the son brought to the altar for sacrifice is Ishmael. Isaac, known as Izak in the Koran, has a different role.

The mosque on top of the Temple Mount is known as Haram al-Sharif, the Noble Sanctuary, or Al Aqsa. It is where the Prophet Mohammed, after riding on his magic steed in his famous nighttime journey from Mecca to the farthest mosque, Al Aksa, the mosque in Jerusalem, ascended to heaven.

The site is of enormous importance to Arab countries and Israel.

The Temple Mount, today and throughout recent history, functions by way of a status quo. Things are not supposed to change. This is part of an ongoing Middle Eastern agreement as well as an integral component of the peace treaty between Jordan and Israel. Jordan is in charge of the Mount, and Israel is in charge of security outside the Mount.

The objective of the Arab terrorists who killed two Israeli police officers on July 14th was to disrupt the status quo and cause a massive uprising against Israel throughout the Arab world. That is not speculation; it is the message they wrote on their Facebook page before committing murder. Israel set up metal detectors outside the Temple Mount to better secure the area, which they control. Rioting and panic ensued.

After just a few days, the detectors have been removed. The status quo is restored, but the rioting, rhetoric and incitement against Israel has not stopped. Tensions are on the rise throughout the Muslim world.

If it were, there would not be 5,000 metal detectors positioned in Mecca for the Hajj, the holy pilgrimage millions of Muslims make every year. Each visitor in Mecca is registered and required to wear a wristband with a smart chip and GPS. Every single pilgrim to Mecca is checked and tracked during their entire visit.

Clearly, the issue is not security.

Arab and Muslim leaders around the world are sounding off and demanding that Israel relinquish control over access to the Temple Mount. Social media is flooded with statements that Israel can never be permitted to have any role in a Muslim site in a Muslim land.  Leaders, including Turkish President Erdogan, made this point very clearly.

The argument may sound frivolous to us in the West. After all, Palestinians and the Arab world got exactly what they asked for: the metal detectors have been removed. Now we see that this was never their goal.

And that means that there is almost no possibility of achieving a larger resolution to even this microcosm of a problem. If this can’t be solved, how will there ever be peace in the Middle East? 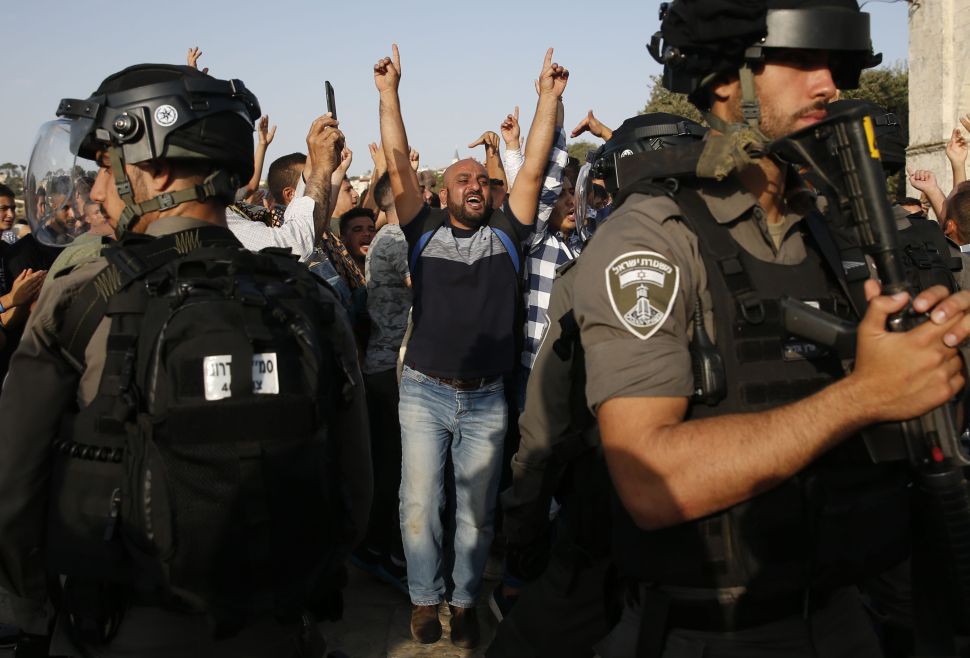