If True Blood revealed anything it was that people love a good story about the push and pull between good and evil. Oh, and that stories about supernatural beings are fascinating, and addictive.

Built on this idea comes the new series Midnight, Texas. Like True Blood, this suspenseful narrative is the spawn of a best-selling book series by renowned author Charlaine Harris.

In the remote Southern town, nothing is what it seems. It’s an area that serves as a veil between the living and hell, where being normal is strange and only outsiders fit in, Midnight is a mysterious safe haven for those who are different—a perfect place for anyone looking to hide from the outside world.

The narrative follows Manfred, a charming, and a powerful psychic who can communicate with spirits, residing in Midnight, surrounded by both human and supernatural allies. Midnight is also home to Bobo, proprietor of the local pawn shop; Fiji, a witch who owns the local Wiccan shop; Olivia, a mysterious assassin with a weapon for every occasion; Joe, an angel who knows all of Midnight’s secrets, having been around for millennia; Lemuel, a wise vampire with a long history in this town; Creek, an aspiring writer with big dreams; and Rev. Emilio Sheehan, who can’t resist the pull of a full moon.

As the town members fight off outside pressures from ever-suspicious cops, deadly biker gangs, and their own dangerous pasts, they band together and form an unlikely but strong family.

Series Executive Producer Monica Owusu-Breen explained how she felt the narrative displays a self-awareness of its own oddness, saying, “it was important for me to maintain that because one of the things I experienced when I read the books is that I wanted to live in [this town] because I loved [these people] all so much. So, for me, there was a desire to make them that charming and witty and funny and engaging.”

Owusu-Breen revealed the very personal reasons that led to her involvement in the series. “Two years ago, I had the worst fall of my life where my mother, my mother‑in‑law, and my dog all died in the same month. So I wanted to develop something to take my mind off of it, and I read two chapters and called my agent and said I had to [do this] because my mother lived in a tiny town in the middle of nowhere and my mother‑in‑law was a psychic who moved to a small town. So I feel like maybe they are watching. I had a real affinity for the material and these characters and it felt like it would be weird not to develop this.”

Comparing Midnight directly to its predecessor True Blood, Owusu-Breen said, “It’s like all of [Harris’] novels, it’s very character‑driven. Her characters are very three-dimensional. So they’re funny, and they fall in love, and there’s passion.  It’s also got this wild creativity. I like to describe this show as all my favorite things in a blender. We ride the tones of horror and action and romance and humor, and we don’t shy away from any of them.”

As for Harris’ direct involvement in the series, Owusu-Breen says, “She came to set.  We talked a lot, but she understands that the novel had a very small-town pace to it, which is very different from what network [television] requires. So it’s a little bit like her books on steroids, but she’s extraordinarily supportive of what we’ve done with this.”

To create the quirky town, the production team stepped outside of traditional shooting locales to fashion what they needed. “We shoot in Albuquerque,” explained Owusu-Breen. “We built a town in the middle of the desert. So it’s the weirdest thing to go out there and just see this little town that was built out of nothing. I love shooting in Albuquerque. The sunsets are ridiculous, and so we take advantage of the physical beauty as well.”

The series boasts the tag line “Only Outsiders Fit In.” When asked about this notion with regard to their characters, the actors chimed in.

Jason Lewis, who portrays Joe, an angel, said, “we’re a bunch of misfits, outsiders, but [in this town] we’re family, and I think that’s something that most people kind-of struggle with. Very few of us end up being born into perfect families. Some of us have to find them, and in Midnight we found ours.”

Parisa Fitz-Henley, who plays Fiji, the owner of the local Wiccan shop, added, “I’m biracial. I have one parent from the States, one parent from Jamaica. Growing up dealing with issues of race, I always felt not quite right. Reading about Fiji, I was like, ‘Oh, my God. I so completely relate to her.’ All of these characters, I feel, bring that home, that feeling of you are outside until you are with your people, and then you are all in.”

Commenting on the viewing public’s fascination with vampires, Lewis said, “I think there’s this thing of being treated like a monster. I don’t think there is anybody who hasn’t experienced that at some level, even the cool kids. You’re treated like there’s something wrong with you, so [when you see that on screen] that’s a very relatable character.”

Francois Arnaud, who plays a Manfred on the series, added, “I also think vampires are just one aspect of this mythology. Every character brings something different to the table. We’re all wrestling with our inner demons, and it’s about controlling and taming them. Everyone understands that.”

As the arbiter of the direction of the series, Owusu-Breen says, “Part of the reason I love writing fantasy is because it gets to be a metaphor for things we struggle with. These characters are struggling with finding an identity in a world that can be hostile to them, and I don’t think you need to be a vampire or a witch or a medium to feel that way. [This] allows us to play with really human emotions in a larger‑than‑life, fantastical, fun world.” 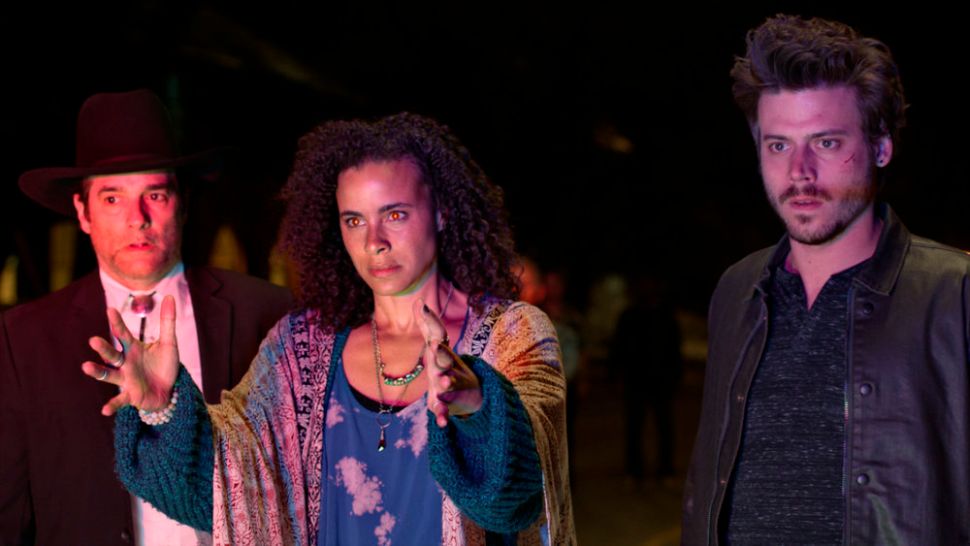