When news of Mindy Kaling’s pregnancy surfaced, the internet erupted in excitement—especially since she refused to reveal the identity of the baby’s father, much like an A-list Maury episode.

In interviews, she’s discussed wanting to have children “imminently,” much like Prince Harry. On The Mindy Project, there was a similar plot point, leaving the titular character dealing with an unexpected pregnancy, while tackling a successful career. It’s the perfect storm to create a secret pregnancy plot, only it’s happening in real life, not in a rom-com.

The actress, writer and comedian is almost as outspoken as the gynecologist she plays on The Mindy Project, often offering inside looks at her personal life on social media. Kaling has never shied away from discussing her dating life and even devotes an entire section of her book Is Everyone Hanging Out Without Me? to “Romance and Guys,” specifically focusing on “Jewish Guys, “Men and Boys” and “Chest Hair.” But she hasn’t been seen with any potential suitors in recent months—Ellen DeGeneres introduced her as “very single” in March.

Her most public relationship has been with B.J. Novak, her c0-star on The Office. Their characters began dating when the writers room realized how much chemistry they shared offscreen.

Since the two starred together, they’ve had a will-they-or-won’t-they romance worthy of its own TV show. On The Howard Stern Show, Kaling admitted she would have married Novak at 24. After their break up, they stayed best friends, cruising the red carpet together and tweeting at each other constantly. Novak even made an on the nose cameo on The Mindy Project, as a potential love interest for Mindy, until she realized his character was too invested in his female best friend.

"Best friend isn't a person, it's a tier." Here I am with @picturesoftext, we are dressed as Harry and Sally and I can't really remember why. ❤️#nationalbestfriendsday

Unfortunately, it seems less than likely the baby daddy in question is Novak, which feels like an unhappy ending to an otherwise classic romantic comedy. Novak was most recently rumored to be dating a youthful Instagram star, the 21-year-old Ceilidh Joy, better known as “lilmixedhunny” to her 80,000 followers. But it looks like his former hunny has moved onto an Instagram photographer closer to her own age.

While Novak has embraced their close friendship over the years, he was the one to break up with Kaling and he’s never seemed particularly enthusiastic about revisiting the relationship, despite his mother’s and Howard Stern’s words of encouragement.

Another unlikely option? New Jersey Senator Cory Booker asked the actress on a date on Twitter, but it seems less than likely a quick online flirtation for press purposes could result in a child, although it’s certainly not unheard of (just look at all of the babies on Bumble).

It’s possible Kaling and Novak are having a little bundle of joy, as he is the Danny to her Mindy; still, it’s equally feasible it’s a true stranger (to her devoted audience, not Kaling), as it doesn’t look like she’s going to disclose details on the baby daddy anytime soon.

Perhaps this will be the next January Jones pregnancy, set to entrance people with mystery and intrigue. Or maybe the A Wrinkle in Time star will go the Beyoncé route, and announce the baby’s father in a detailed photoshoot, complete with office supplies and an adoring Novak by her side. 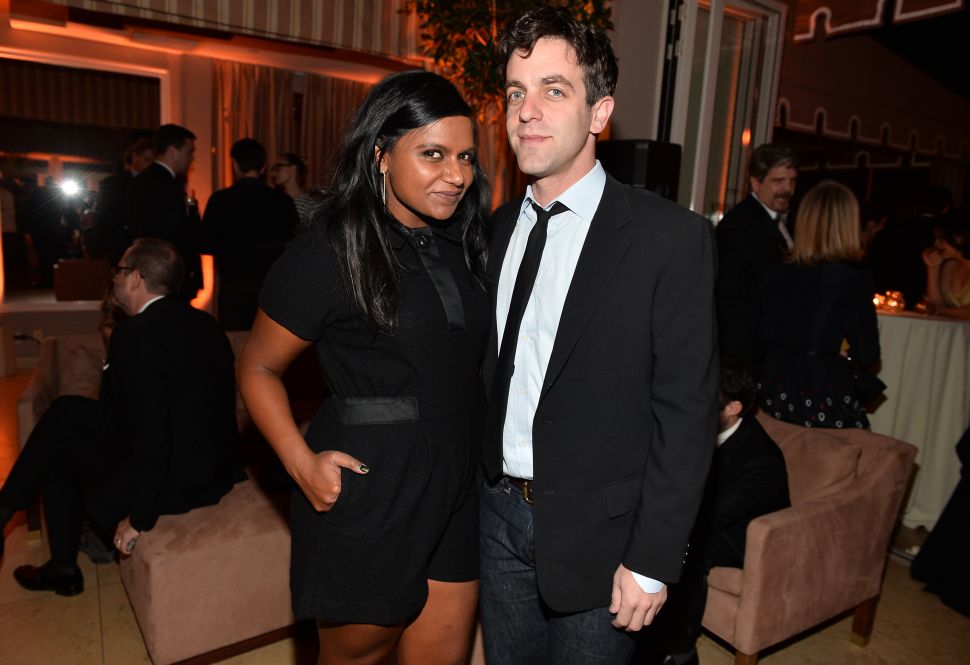