The Hollywood Bowl summer concert series is the most uniquely wonderful experience in Los Angeles. Guests show up in droves with bags of food, blankets, bottles of booze, and somehow everyone quickly finds their ticketed spot in the seemingly endless rows of stadium seating. While the sun sets behind the open air stage, and the members of the LA Philharmonic cue up their instruments, the audience chatter instantly ceases, transforming the concert venue’s atmosphere into something that feels quite magical.

Scoping the Bowl’s 2017 schedule, Dudamel and the Stars of Ballet instantly stood out. To open the summer classical series with wunderkind conductor Gustavo Dudamel, whose presence alone has the starpower to draw a large audience, and then add American Ballet Theatre principal dancers Misty Copeland and Marcel Gomes, along with Russian ballet stars, Sergei Polunin and Natalia Osipova to the bill, this was easily the must-see show of the season.

Adding to the excitement, Polunin, known as the “bad boy of ballet” and his Royal Ballet star partner would be dancing an excerpt from Giselle, the first ballet they ever performed together, after which they fell in love in real life. To put it in Hollywood terms, when this “it” couple of the ballet world finally went public with their romance, it was akin to the day Angelina Jolie and Brad Pitt confirmed they were a couple. I imagined watching them perform this grand pas de deux would be like seeing the behind-the-scenes footage of Mr. and Mrs. Smith.

Before the show, the LA Phil commemorated their classical premiere with an upscale picnic at Camrose Park, a private outdoor area that’s a two minute walk from the Bowl. The menu, created by James Beard Award winner Suzanne Goin and her partner Caroline Styne, was a celebration of summer fare. It consisted of three different types of gourmet tacos, BBQ pork, cornbread, sweet succotash, lobster rolls, and a full bar. While dressing up is unnecessary for most outdoor concerts, nary did I see the usual Los Angelean outfit of Chucks and ripped jeans. Theatregoers arrived instead in billowy summer dresses or freshly ironed button down shirts.

Adding to the fanciful vibe, it was warm 75 degrees on Tuesday evening (July 11), and as the pink and blue sky shifted to darkness, Dudamel kicked the show off with a rousing rendition of “The Star Spangled Banner.” The audience’s excitement was palpable, past ready for the actual show to begin. But once Tchaikovsky’s The Sleeping Beauty started playing, I suddenly realized that this may not be the epic spectacular I hoped to see.

The orchestra was stationed behind the marley dance floor, which meant the conductor’s back would be facing the dancers. If Dudamel couldn’t see the dancers, and none of the performers could see the conductor, how they’d be able to stay in concert with each other was bewildering. The relationship between conductor and dancer is so extremely important. Together, they create and maintain the artistic fluidity of the entire show.

While it’s impossible to have a bad night at the Hollywood Bowl—the atmosphere is breathtaking, and the acoustics make it so there isn’t a bad seat in the house—whoever curated Dudamel and the Stars of Ballet night made a large misstep. Making it impossible for four of the most incredible ballet performers to connect with one of the most decorated musical directors in the world, the audience was robbed of what could’ve been one of the greatest classical performances of this decade.

Gomes was the first dancer to take the stage, executing Matthew Bourne’s version of the White Swan solo in the iconic feathered capris, his body painted white. The Brazilian dancer is a tour de force of talent, but there seemed to be a lack of energy in this performance. And while Copeland’s highly anticipated grand entrance generated much excitement, it faded away again just as quickly.

Copeland appeared as ethereal as ever. Her lithe body, pound for pound of pure muscle, accentuated by her perfectly arched feet is a vision of pure ballerina beauty. But seeing Copeland dance Petipa’s version of the leisurely paced White Swan solo, right after Gomes did his, was quite anticlimactic. And with the conductor and dancer blind to one another, both parties seemed to proceed at an even more glacial pace in fear of losing tempo with one another.

Of course, dancing with a new conductor and orchestra without ample rehearsal time is challenging, and that’s putting aside the X factor of performing in an outdoor theatre. So for a one-night show, it’s understandable we weren’t going to see Flames of Paris. But when it’s advertised that Copeland, the most famous face in ballet right now, and Gomes will be dancing an excerpt from Swan Lake, and they’re not doing the Black Swan pas de deux, it’s a huge let down.

Imagine going to a Fleetwood Mac concert, and after the band performed a half-hearted rendition of “Gypsy,” it was over. No “Rhiannon.” No “The Chain.” Looking up towards the Hollywood Hills was the closest you got to hearing “Landslide.” That’s how disappointing the first act felt. Thirty minutes of music, and maybe eight minutes of dancing total. I felt cheated. Like someone put a rich piece of eight-layer chocolate cake on my plate but then told me I could only lick the fork.

Osipova and Polunin’s performance of Giselle was alright. Copeland and Gomes returned to the stage to dance the infamous balcony scene from Romeo and Juliet, but it too fell flat, for they had the misfortune of having to perform it right after Dudamel and the orchestra played Prokofiev’s “Dance of the Knights,” which was easily the evening’s biggest highlight. The powerful march in which the tenor saxophone, strings, cymbals and bassoon, all come together in sweet dissonance, creating the fierce tension between the Capulets and the Montagues from William Shakespeare’s play, in musical form. I felt this moment. Emotions were stirred, thoughts lost in the sounds foreshadowing the most tragic love story of all time.

Perhaps, because the stage is so big, ripe for high flying entrances and dramatic exits, I thirsted for more action. Osipova, known for her versatile fouettés, a series of 32 turns that has famously earned her a double curtain call, performed zero of them. I expected to want to jump out of my seat in applause as Gomes jetéd six feet into the air and around the stage with 180 degree splits. That didn’t happen either.

Ignoring the questionable program choices, having such famous ballet dancers merely share the stage with Dudamel and the LA Phil was enough to light a spark of excitement. The amphitheatre, which can hold up to 17,500 people, was absolutely packed. And with some rearranging, Dudamel and the Stars of Ballet could next year be a classical show that sets the roof on fire. If, ya know, the Bowl had a roof.

Overall, it was a fun night. There’s little to hate about hearing live music outside on a perfect summer evening at the Hollywood Bowl. And maybe, my expectations were too high. Maybe, I wanted to have my chocolate cake and eat it, too. 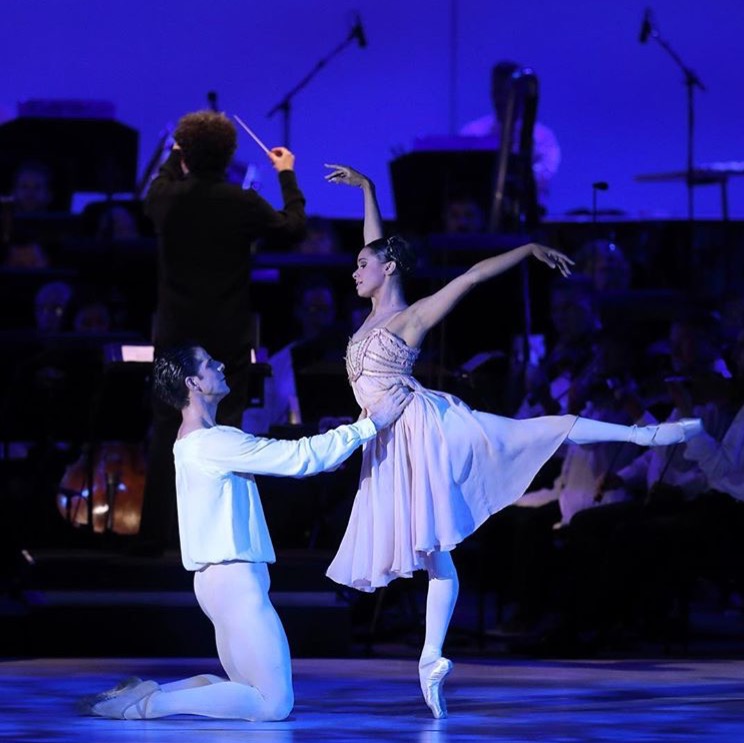