Call this case War for the Selfie of the Apes.

A San Francisco court heard arguments this week in a case set to determine whether animals can hold copyrights. The primate in question, Naruto, went viral thanks to his toothy selfies. But does he actually own the images?

People for the Ethical Treatment of Animals (PETA) thinks so. The organization is suing British nature photographer David Slater and the San Francisco-based self-publishing company Blurb, which published a book called Wildlife Personalities that includes the monkey selfies, for copyright infringement. Slater, who taught Naruto how to use a camera, claims he owns the copyright, while PETA is arguing that the monkey himself does.

The saga began in 2011, when Slater traveled to Indonesia to photograph a group of crested macaques which included Naruto. Slater wrote on his blog that he struggled to get the monkeys to keep their eyes open for a close-up, so he coaxed one of them to press the shutter while looking into the lens. Hence, while Naruto took the photos, Slater claims he couldn’t have done it without human help.

While Slater earned a few thousand pounds from the images, he never officially licensed them. The images somehow ended up on Wikipedia in 2014, however, so Slater asked the site to take them down. The online encyclopedia argued that the photo couldn’t be copyrighted since it wasn’t created by a human, and the U.S. Copyright Office agreed, ruling anyone could use the image for free.

That wasn’t good enough for PETA, however, so in 2015 it filed its own lawsuit to prove the animal was the rightful owner of the copyright. An initial ruling upheld the Copyright Office opinion, but PETA appealed this decision to the Ninth Circuit Court, which is where this week’s monkey business occurred.

Making note of the fact that Naruto isn’t even aware of the legal fuss occurring on the other side of the world, Slater’s attorney Andrew Dhuey said “monkey see, monkey sue” is not good law under any federal act.

“There is not even any allegation that the copyright could have somehow benefited Naruto,” Judge N. Randy Smith added. “What financial benefits apply to him? There’s nothing.”

On the other hand, PETA attorney David Schwarz argued that Naruto was accustomed to cameras and took the selfies when he saw himself in the reflection of the lens. He said the case came down to one simple fact: photographs can be copyrighted and Naruto is the author.

PETA said that if it wins the case, it will use the money to help people study the monkeys and protect their habitats.

“As we learn more about these highly intelligent, complex primates, who have their own culture and their own language and want only to be left alone and in peace, PETA believes that society has a moral imperative to advance and amend the law to recognize animals’ rights,” a PETA statement after the hearing read.

While this case may seem absurd, it’s had real life effects. Slater is currently broke, unable to replace his camera equipment, buy a car or pay his attorney. He couldn’t even afford the airfare to San Francisco to attend the hearing. Slater told The Guardian that he’s trying to become a tennis coach or dog walker to make some money.

On top of all that, Slater doubts that Naruto is even the monkey in the photos—he said the primate he encountered was a female of a different age.

The Ninth Circuit Court has no hard deadline for closing cases, so it could be a while before this monkey business is resolved. 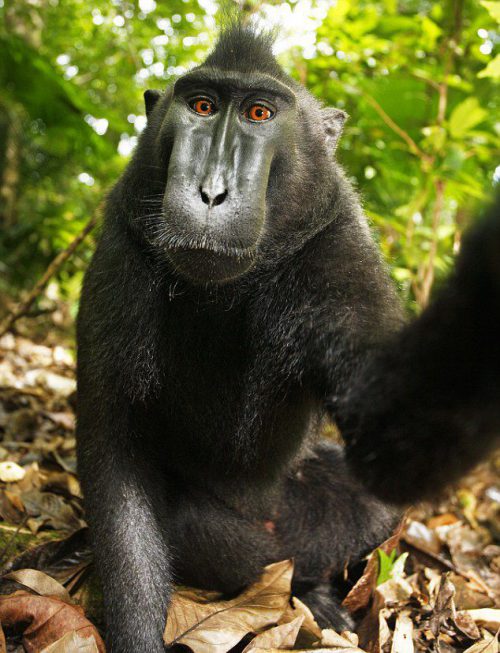