You can’t name an episode of television “Shots Fired!” and then not bring it so hard that the audience has to watch the episode with one hand over their face like Nic Cage in 8MM. It would be like Babe Ruth stepping up to the plate, pointing his bat into left field, and then casually walking into the stands to eat a hot dog and drink a beer in between innings (I don’t know, baseball legend anecdotes are hard). Fortunately, the fine people who create the Challenge each week are masters at turning us all into the George C Scott “turn it off” meme except instead of turning it off, you’re like “yes, yes shots have been fired!”

The first most important piece of outstanding business is that CT has finally made it into the country. They didn’t really leave this as a cliffhanger—we all knew that he would show up eventually. Plus, I spoke to him at The Challenge XXX: Ultimate Fan Event last week and it’s doubtful they would have flown him in to do press if his only appearance for the season was him filming himself trying to get a new passport. Although it is CT we’re talking about, so I would watch a full six-week Champs vs Pros-like mini series about CT getting his license renewed at the DMV, and so would you, don’t lie. CT came lolloping into the house like the big brown bear from Grandpa Potts’s story in Chitty Chitty Bang Bang only he wasn’t alone. He was with Briana, who was last seen leaving Rivals III because her partner, Brandon, missed his girlfriend. Briana is here to replace Ashley, who quit in the first episode because the airline lost her luggage.

Upon CT’s arrival, Johnny fills him in on what he’s missed so far—the first challenge, the purge, and six people already being eliminated. CT is surprised to find out that Cory took out Darrell. Johnny and CT decide that these are in fact the shots that have been fired. Little do they know that the six eliminated contestants are in the Redemption House drinking Tuesday-tinis and having their fortunes read. But by Cory going after Darrell this early, it seems like a clear message that he’s trying to take out the best players before the final. And since Johnny and CT are two of the best players, they feel like Cory’s message is a direct threat to them. Of course, you always take the best players out if you can but also Cory has a way of making big moves backfire; see all of his other appearances on the show.

Speaking of Cory, he’s still stuck in the house with three of his past hookups: Kailah, Camila, and Aneesa. The line of the week goes to Cory who says “I give credit to any guy to be in this situation” but he’s talking about his own situation so he’s really just giving himself credit. That’s like me regularly telling people “I give credit to anyone who writes about the Challenge,” and then making them read my articles. Cory manages to sneak a kiss from Aneesa and the producers ask her if Cory is still a good kisser, leading her to deny it had ever happened before (while they roll the footage of it happening the first time.) After that, Jemmeye leads an excursion down to the beach where Cory and Camila are allegedly intertwined. The producers ask Cory about it, which he denies (while they roll footage of the two of them running through a darkly lit back entrance so as not to get caught). The impressive thing is how Cory keeps thinking he isn’t going to get found out when in fact this production team will never stop coming for him like Javier Bardem’s haircut in No Country For Old Men. Also, this is Tony Raines on Skeletons-level of hooking up when he somehow managed to make out with his roommate, Madison, and then both of his ex-girlfriends that were staying at the Real World house as part of the show.

But to the Challenge for this week. It involved sitting up on a raised platform ledge, while the other half of the players shoot rotten tomatoes at you from a slingshot below. It was kind-of like a Fozzie Bear Muppet Show segment gone wrong. Some of them were real ruthless with the tomatoes, too. Cara Maria caught one to the face and Tori got hit repeatedly in the private parts area. Nicole had the nicest dodge of the whole thing, slowly cocking her head out of the way from getting splattered in the face. There were two heats and the two men and women who stayed on the longest from each were all safe. As a later twist, they also got to pick the guy and girl to go into the elimination round. Johnny, CT, Derrick, Nelson, Tori, Camila, Cara Maria, and Nicole all won. There was some dissension in the ranks because Johnny, CT, Derrick, and Cara Maria all wanted to send Cory to elimination because of the aforementioned shots he’d apparently fired. But Nelson is Cory’s best friend and Camila went against her crew of Champs, most likely because of what happened on the beach with her and Cory earlier in the week. TJ asked Cory if he had a hit list and he mention CT, Johnny, and Derrick firing even more shots—the total number of shots having been fired now at a near incalculable number. Briana also got picked for elimination because she showed up late with CT and missed the first challenge last week. TJ told all of the eight people who were the first to fall from the ledge in the challenge to pack their bags for the elimination. They’re going to decide among themselves which guy and girl have to go in against Cory and Briana. We’ll find that out next week.

The final bit of drama surprisingly happened at the Redemption House. Simone asked LaToya and Shane if they would grease her head and they both turned her down. Simone was angry because she cooks and cleans in the house and so in return she felt like her friends should help her apply her hair grease. Since Shane does hair and makeup, Simone felt like it shouldn’t be a big deal to him. For some reason, the producers left the six of them alone without cameras. And a fight broke out. And this episode of the Challenge turned into a Forensic Files reenactment. From the look on Devin’s face—and he rarely gets fazed—the situation did not sound good. Some combination of Shane hitting Simone and then Simone raking Shane’s face with her nails so that he had visible scratches around his eyes and cheeks occurred. Devin tried to break it up and got bit by Shane while holding him back, and then Simone smashed a champagne bottle. Both Shane and Simone got sent home, which is wild because you almost never get a second chance on these shows and they just blew it over hair grease. But even better is that production somehow missed this huge rumble but is still capable of catching Cory making out with someone from a satellite cam shot in outer space. Truly, an episode filled with fired shots. 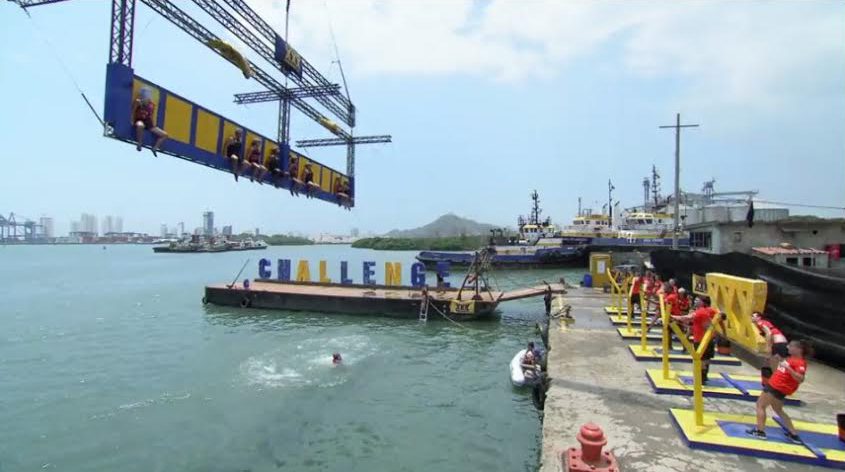