Milestone birthdays can be stressful. I have seen the best minds of my MTV generation mildly freak out when their age rolls over from ending in a four to a five, and all-out panic when it hits a zero. Why we assign such meaning to these intervals is a debate for another time. Let’s just say, Blink-182 nailed it when they ran down the street naked singing “nobody likes you when you’re 23.” You have two choices of how to act on these celebrated occasions. You can go full Eminem and lose yourself in the music, the moment, own it, and try to never let it go. Or you can accept that you’re older now and are fortunate to know better about who you are as a person than ever before. When it comes to the MTV Challenge, hitting thirty seasons means both.

It’s just shy of noon on Monday, July 17—a weekday, not that you can tell from the crowd amassed outside of Exceed Physical Culture, a gym on Read Street in downtown New York City. This is the location of The Challenge XXX: Ultimate Fan Experience. It’s a full day event of four exercise classes featuring and taught by cast members, with meet-and-greets in between. It’s basically that Disney World breakfast you can do where you wake up at 6 a.m. for an omelet and Pluto and Snow White take pictures with you while you eat. Except this is completely worth it.

It’s every fan’s dream to try and compete in a Challenge. Would you be able to make it? Even the best competitors over the years have failed. It’s a test of endurance and brains—mental and physical strength. Much like the time I decided to play Big Brother at that premiere party, I decided this would be my Challenge. I signed up for all four exercises classes knowing that they would not be easy, and also aware that this day would go deep into the night, at which point I would be rewarded with a screening of the first episode of Dirty Thirty, a cast Q&A, and finally get to mingle at a party with all of my favorite competitors. Like I said, it was just before noon.

When the first group of challengers pulled up to the curb the crowd went wild. Arriving were Cara Maria Sorbello, who was teaching the first class; Derrick Kosinski, an OG competitor from the Road Rules days who is making his comeback this season; Ashley Mitchell; Tony Raines, who is the most entertaining man on television; Shane Raines, Tony’s brother (not to “and her kid sister, Kit” him, Shane is great); and rookie Derrick Haynes from Are You the One?. The roar from outside would continue throughout the day when each new cast member appeared. The other classes were taught by Camila Nakagawa aka the Camilinator, Corey Wharton, and Darrell Taylor.

Remember before when I said these classes weren’t easy? I was putting it mildly. It was the hardest day of physical activity I’ve ever had. (Up until this point the most I’d ever achieved in one day was playing two games of softball in a row and then having to attend an engagement party.) All day everyone was asking which class was the toughest. Cara Maria’s was first and definitely the hardest. Camila’s had a lot of dancing and was probably the most fun. Corey’s was maybe the best workout. By Darrell’s I was no longer a human being, I was a puddle of spasming body parts.

But getting to take part in these workouts with these people was worth the pain. Whether it was doing high knees with Tori Deal, another rookie from Are You the One? (Tori reps Queens so we always root for Tori); doing high-five pushups with Nelson Thomas; or leg kickups holding onto Darrell’s legs while he pushed mine back down (this was during the last class and my legs could barely make it up to his hands, but the last thing I would ever do is disappoint Darrell) it was an experience I’ll never forget. Even if I haven’t been able to walk up or down stairs without holding onto the bannister like it was a fire pole I was about to slide down, since. As a matter of fact, I suggest we replace all staircases with fire poles for the next week or until the feeling in my thighs returns.

The evening screening was held at the Roxy Hotel a few blocks away. Have you ever seen a movie in a crowded theater and it felt like it was the funniest thing you have ever seen, but then watched it again at home and it was still funny but not as funny? There’s something about a communal viewing experience that makes it so much better. I’ve never watched an episode of the Challenge in a movie theater, let alone with cast members filling up the back four rows and the rest of the seats occupied by the most die-hard fans.

Speaking of TJ, he opens the episode by introducing just how dirty it’s going to get. First of all, there’s a million dollars on the line, more than ever before, and he’s lying to the cast about it, telling them it’s only $350,000. The million will be split between the guy and girl winner with possibly some left over for second and third place. It’s still a lot of money. As the players are introduced, their dirty pasts are highlighted. Johnny stranded Paula, broke up Abram and Cara Maria, and stole his partner’s share of their winnings. Nelson made a self-promotional leap in the semi-finals that would guarantee his spot in the finale. Camila blacked out and verbally lacerated her competition. CT is so dirty he couldn’t even get past customs into Columbia, so he barely appeared in the episode.

The first Challenge eliminated six players on day one. Ashley also left the night before because the airline lost her baggage and she is always good for a breakdown at some point in the season, it just came early this year. But already the show is being aggressive with making cuts. Corey, who has his share of dirt having hooked up with more people in the house than anyone else, won the last part of the Challenge and got to choose the three guys to send home. He saved Tony, sending Shane, Darrell, and Devin Walker out of the game. Jenna won for the women and sent LaToya Jackson, Simone Kelly, and Amanda Garcia out. At this point in the screening, the person sitting next to me leaned over and said “they should do an elimination house so people can come back in.” Of course, die-hard fans have a sixth sense about these kinds of things and we were soon introduced to the “Redemption House” —nobody is going anywhere.

During the Q&A Johnny Bananas spoke about how thrilled he is by this season’s overt acknowledgment that it is a dirty game—something that has allowed his record-high six Challenge wins. We should all be excited. A dirty game is an entertaining game. LeRoy Garrett mentioned he wasn’t sure why he got picked as a “dirty” player. He’s not wrong, these aren’t necessarily the dirtiest all-time people. Having a “dirty” season without notably absent Wes Bergmann is like doing Miami Vice without Don Johnson. But real life schedules and fan-favorites supersede casting sometimes.

Afterwards at the party everyone got to mingle. Selfies were snapped. Stories were told. I spoke to Tony about how he felt he’d matured from from season to season. According to Tony, he is constantly trying to become a better person. Either he is, or he’s the type of person who tells you that and smiles and you believe him. Tori and I talked about Queens and how happy I was for her to make the jump from Are You the One? to Challenge, because she was one of the few people on that show who used strategy to win. Everyone gathered around CT to get their moment with the most favorite of all fan faves. CT told me he was done after he won Invasion of the Champions. But then he did Champs vs. Pros for charity, and then and he couldn’t resist the lure of the thirtieth and biggest season when it came around. I’ve never been happier about being lied to, anyway. Doing a season of the Challenge without CT is like doing Miami Vice without Miami.

As I headed to the bar surrounded by my favorite cast members, I realized one thing. My legs felt like they would never talk to me again. Okay, maybe two things. This was me living my Challenge dream. I got to compete with the challengers during the day and party with them at night, just like I’ve watched them do for thirty seasons. Here’s to thirty more. 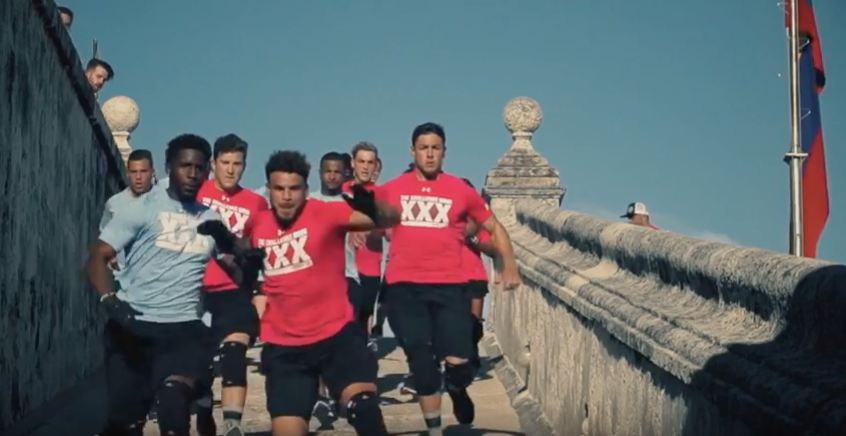