There’s that old, surreal sentiment that just before you die, your whole life flashes before your eyes. It’s a home movie compiled and edited for an audience of one, a suggestion that can be equally comforting or foreboding, depending on the story being told. Neil Young must have been thinking a lot about death in the winter of 1974 when he recorded On The Beach, his simplest, yet most unusual record to date. Young’s dear friend and Crazy Horse bandmate Danny Whitten had died after overdosing on Valium and alcohol in November 1972, after Young kicked him out of the band for his escalating heroin addiction. And in June 1973, longtime Crosby, Still, Nash and Young roadie Bruce Berry, who had been turned on to heroin by Whitten, fatally overdosed on a speedball of cocaine and heroin.

From the pain of losing two friends came Young’s “ditch trilogy,” a decidedly darker and non-commercial trio of records, following 1972’s breakthrough Harvest, that looked mortality in the eyes. “‘Heart of Gold’ put me in the middle of the road,” he wrote in the liner notes to his first best of, Decade. “Traveling there soon became a bore so I headed for the ditch.”

The first “ditch” release, 1973’s Time Fades Away, captured Neil and his band The Stray Gators (sans Whitten) meditating on death through a rockin’, country-fried set of then unreleased songs. Later that year he recorded Tonight’s The Night, mostly on a single day in August—book-ending the album with different versions of the title track that spoke frankly about Berry’s overdose.

The most surreal album in the ditch trilogy, On the Beach, captures the ugliness of California decadence after the 1960s, and, together with John Phillips’ 1969 masterwork John, The Wolfking of L.A., encapsulates all that was both beautiful and ugly about living out there on the beach, where those seagulls are so out of reach.

Under the pseudonym “Bernard Shakey,” Young also released his first film, Journey From The Past in ’73. This may explain why he felt the need to shelve Tonight’s the Night, and work on an album as visual and cinematic as On The Beach. There’s objectivity in Young’s images, be they the morning glories on the vine of a mountain in “Motion Pictures” or the seasick sailors in “For the Turnstiles.” By re-watching his life, and putting his own pain in perspective beside the world at large, Young took a trip through his own mortality.

“I was pretty down I guess at the time, but I just did what I wanted to do, at that time,” Young told Melody Maker in 1985. “I think if everybody looks back at their own lives they’ll realize that they went through something like that. There’s periods of depression, periods of elation, optimism and skepticism, the whole thing is…. it just keeps coming in waves.”

Richard Nixon, whom Young sang about bluntly in the CSNY classic “Ohio,” would resign in August, 1974, and a small piece of newspaper sticks out from the sand in On the Beach‘s cover. Its headline reads “Senator Buckley Calls for Nixon to Resign,” immortalizing Nixon’s shame before it was finalized. Elsewhere on the cover, a yellow Cadillac in the sand recalls the psychedelic cover art for the paperback edition of J.G. Ballard’s The Drought, released in 1974.

Under the influence of violinist Rusty Kershaw’s “honey slides,” sautéed marijuana and honey cakes that got Young and his personnel stoned beyond belief, On the Beach looks at the end of the world with a stoned sense of calm, loosely recalling the post-apocalyptic plot of Nevil Shute’s 1958 novel of the same name. In the album, Young seems to be devising a plan to get the hell out of California, even if he ends up running away to nowhere or watching morning glories grow on a mountain.

We get the merging of Young’s personal and public life through a trio of stunningly powerful blues-ish numbers. His hatred of California vapidity is reflected in The Manson Family’s unholy vision on “Revolution Blues.” The sense that Young has depleted himself is mirrored by oil gouging as a factor in the destruction of our natural resources in “Vampire Blues.” Finally, the inevitable destruction of places and memories, thanks to time’s passing is echoed in “Ambulance Blues,” as Young laments the destruction of 88 Isabella Street, where he lived in Toronto with Rick James as they gigged around town with their old band, The Mynabirds.

“An ambulance can only go so fast/It’s easy to get buried in the past/When you try to make a good thing last,” he sings all matter-of-factly on that final track. These words emphasize Young’s gifts for distilling his personal pains into profound statements, gifts that have been consistent throughout his career.

Elsewhere, on the song “Motion Pictures,” written for the mother of his first child, Carrie Snodgrass, Young acknowledges this struggle bluntly. “Well all the headlines, they just bore me now/I’m deep inside myself, but I’ll get out somehow,” he coos in hushed tones. Young is struggling at the same time his country is going through radical transformation, and he knows his problems pale in comparison to the larger transformations happening.

Similarly, the title track’s opening lines either nod to Young’s frustration at fame and the grind of celebrity, or perhaps echo his feeling of losing his grasp on people other than himself—“The world is turning/I hope it don’t turn away.”

We currently live in a time where every facet of social interaction is identity driven—be it online, or in a public space. Art, and specifically music, are sectioned off around genre, medium, and demographic, a consequence of increased marketing insights and tailored ad campaigns.

Since On the Beach, Young himself has become a grassroots leftist, succumbing to certain conspiracies, like the idea that GMOs are causing autism in children. It is enough to make you wonder if we’ll ever have another artist like Neil Young standing On the Beach—his ego and identity eroded by loss and ocean waves, searching for disparate threads of meaning and wisdom to dig his toes back into the world at large. 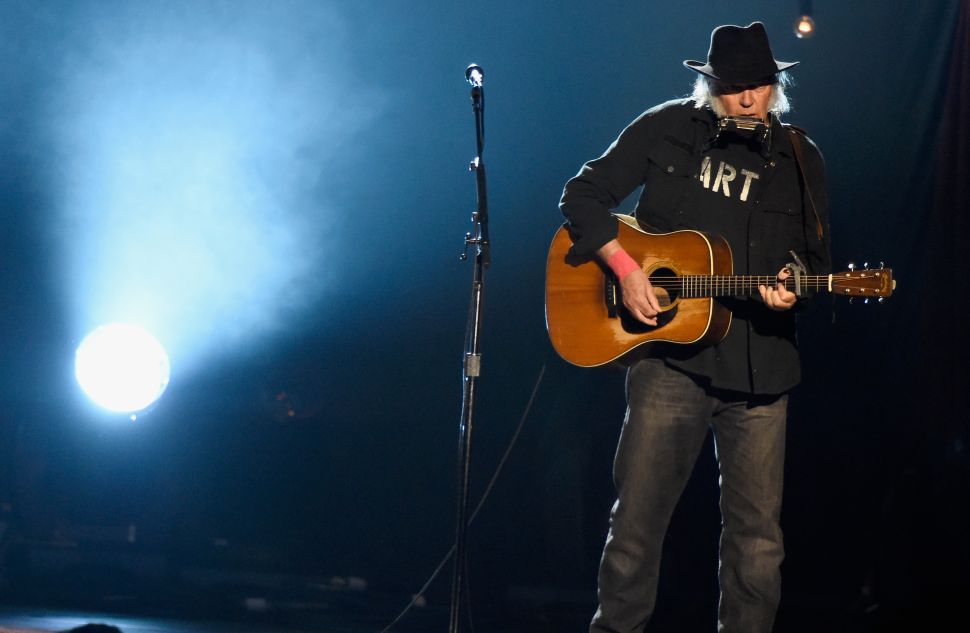