A three-day government shutdown that seemed to come out of nowhere ended in the wee hours of the Fourth of July after Gov. Chris Christie struck a grand budget bargain — his last — with the Democratic leaders of the Legislature.

The governor in February announced plans for the state to take roughly $300 million a year from the insurer’s $2.4 billion reserves starting with the next administration and devote those funds to a new state program meant to combat the rising, deadly tide of heroin and opiate addiction sweeping the nation.

In the end, he accepted a drastically different bill twice watered down by Democrats — first in the Senate and then the Assembly — that prevents the state from taking any of Horizon’s funds, adds two directors to its 15-member board, caps its reserves at theoretical levels Horizon has not seen in years, and forces the company to post some executive compensation data online.

It was a glass half full for Christie, who acknowledged he didn’t get quite what he wanted from Horizon — but enough to call it a victory. The budget deal allowed Christie to extract himself from a spiraling situation, coming hours after an international firestorm over pictures showing him and his family on a state-owned beach that was closed to the public during the shutdown.

“The winners will be Horizon policyholders and the taxpayers of our state,” Christie said. “No more operating in the shadows for Horizon.”

In exchange for the Horizon bill and a separate proposal to devote all state lottery revenue to the $73 billion pension fund for public workers for 30 years, Christie agreed to dozens of spending items on the Democrats’ wish list that he had neglected or vetoed out for seven years.

He also got Democrats to begin to shift some school funding dollars from overfunded districts to underfunded ones with high enrollment growth. The fiscal 2018 budget redistributes nearly $31 million in so-called adjustment aid provided under the School Funding Reform Act of 2008.

“We spent the entire day, up until about 15 minutes ago, hammering out details,” Senate President Steve Sweeney (D-Gloucester) said in announcing the deal around 10 p.m. “It’s the best budget we’ve seen in 10 years, and it provides for a lot of people. And that’s what we care about.”

Christie said he forced a conversation on Horizon, an “industry behemoth” with 55 percent of the New Jersey market and the only company to participate in the federal marketplace established by the Affordable Care Act. The governor said he was proud that he capped its surplus for the first time and shed light on its “secretive” operations.

Hobbled by a 15 percent approval rating this year, Christie nonetheless showed his tactical genius at dividing and conquering his way through a Legislature that has been dominated by Democrats throughout his two terms. He used his last bit of leverage — the budget — to get a Horizon bill through both houses despite months of opposition from an array of business, labor, health care and other advocacy groups, and a furious lobbying and public relations blitz by the company.

The promise of $325 million for long-suffering programs — legal services, for example, had laid off more than 100 lawyers after Christie took office — was, for many Democrats, an offer they couldn’t refuse. Assembly Speaker Vincent Prieto (D-Hudson) saw a mini-insurrection in his caucus for days as two dozen Democrats withheld their votes on the state budget until the speaker acceded to a Horizon bill and all the money that came with it.

Separately, the $31 million redistribution of state aid for schools was a priority for Sweeney that might not have been as easy to get through a Democratic governor next year, since the party’s nominee, Phil Murphy, is close to the New Jersey Education Association teachers union, which opposed that change.

Led by Sen. Joe Vitale (D-Middlesex), the Senate passed a bill last week that would have made broad changes to Horizon’s governance and its surplus management, forcing it to spend from the $2.4 billion reserve fund every year that the state Banking and Insurance commissioner determined it to be in excess. Vitale’s bill also would have designated Horizon as a charitable organization and as the state’s “insurer of last resort,” responsible for covering anyone who could not otherwise afford a health care plan.

Christie had called Vitale’s blueprint a “significant compromise” from his original designs on $300 million a year from the insurer’s surplus.

But in the end, he didn’t even get that.

Prieto had refused to post any Horizon legislation for a vote in the Assembly before Christie signed the budget, calling Vitale’s plan a bad bill that was being fast-tracked at the worst possible time, just as Congress mulled a sweeping revision of the Affordable Care Act that could gut Medicaid in New Jersey.

After the shutdown took hold of the state, furloughing workers, closing state parks and courts, wrecking one couple’s wedding plans, raising the specter of casino closures after seven days, and putting everyone — Christie, Prieto, Sweeney and Horizon — under uncomfortable klieg lights, every major player ended up caving a bit.

Horizon accepted some legislative changes. Sweeney and Vitale sacrificed the strongest medicine included in their bill. Prieto agreed to move the legislation along with the budget, instead of afterward. And Christie took a significantly weaker bill than he or Vitale had envisioned, and still ponied up the $325 million for Democratic budget priorities.

Under the final version of the Horizon legislation, the company would not be designated an insurer of last resort, it would not have a charitable mission, its 15-member board of directors would gain two members — one appointed by the Senate president and one by the Assembly speaker — and its reserves would be set at a minimum of 550 percent and capped at 725 percent of its risk-based capital (RBC) ratio, or the amount needed to pay all its members’ claims. Any excess must be spent on Horizon’s subscribers, according to the bill.

Vitale’s bill had included several ways for the state to take and spend any excess surplus at its discretion, and included no RBC ranges, leaving all determinations as to what constituted an “efficient” or “inefficient” surplus to the state Banking and Insurance commissioner. Christie had proposed an even blunter instrument: take any funds above the 550 percent threshold automatically every year and spend them on drug treatment efforts.

In the end, after a day of meetings with Sweeney and Vitale, Prieto and Horizon chief executive Bob Marino defanged the most aggressive parts of Vitale’s bill.

“We make sure any excess reserves go back to those members, and I think that was key for me, because if you took any of those reserves away and it was something that was needed — if it was an epidemic or anything of that nature — it was going to be, you know, premiums would go up and in essence we would be taxing those subscribers,” Prieto said.

Vitale said that the changes “could have been done a week ago,” if only Horizon had agreed to meet earlier in the process. Instead, the company for months pursued a strategy of defeating any legislation, Democrats said.

“There are substantive changes, but in terms of all of those categories that we worked from, those categories still exist,” Vitale said, noting that under the final version of the bill, Horizon’s reserves are still capped, its board still sees changes, and, as in the previous version of his plan, the company still will be required to post financial data and executive compensation online for all to see. (Vitale’s initial proposal would not have expanded Horizon’s 15-member board. Instead, it would have reduced the company’s ability to make 11 appointments on the board to eight, leaving the other three to be elected by its subscribers.)

“As far as the money not going to drug treatment folks, that’s what I wish would have happened, but I couldn’t get agreement on that, so I gave in on one point, yeah, but I got a bill that reforms them significantly and that caps their excess reserves, which is what bothered me right from the beginning,” Christie told reporters.

“My idea of what to do with the excess reserves was to give it to those people who are suffering from drug and alcohol disease and need rehabilitation therapy. Speaker Prieto thought it was more important not to serve those people. That’s his choice. I disagree with it. But I wasn’t going to close down government and not get a deal tonight just over that issue. … That’s the nature of compromise.”

Even as he declared partial victory, Christie took repeated shots at the “arrogant” executives at Horizon who declined to negotiate for months and also had tough words for Prieto and his “Hudson County” ways.

“I think what they learned tonight is that no matter how many lobbyists they hire and how much money they spend, if a governor and Senate president are intent on reforming them, then they will be reformed,” Christie said of Horizon.

“I’m satisfied with the cap. If I were dictator would I have made it lower? Yes. But I’m not. But, remember, a few days ago, people were saying there would be no cap at all, because there would be no bill at all, and now we have a cap.”

Marino in a statement said Horizon was “proud” to have fought for its 3.8 million subscribers and to have helped broker a deal to break the shutdown that took hold of Trenton, the second one in modern state history, not seen since former Gov. Jon Corzine had his own budget standoff with a Democratic Assembly speaker, Joe Roberts, in 2006.

“We thank all our legislative supporters, in particular Speaker Prieto, and the broad coalition of business, labor and consumer groups who stood up for Horizon’s 3.8 million policyholders,” Marino said. “The compromise reached today with Speaker Prieto’s and Senate President Sweeney’s leadership achieves a goal we established when the governor first introduced the idea of taking our reserves: Horizon could only agree to legislation that is reasonable, avoids higher costs for our members, and that does not impose unfair or excessive obligations.”

Christie confirmed on Monday night that Horizon earlier on had offered a one-time $135 million contribution for his drug treatment efforts, which he declined at the time as a pittance. But the governor said he would rather have the final deal — even without any money — and predicted it would benefit residents for years to come. “We have finally capped the excess profits of Horizon,” he said.

It was an unlikely tale from the start: A free-market conservative railing against a health insurance company, and a Democratic boss from Hudson County, Prieto, standing up for corporate America. One high-ranking Democrat said Christie’s goal was, more than anything, to “punch Horizon in the mouth.” 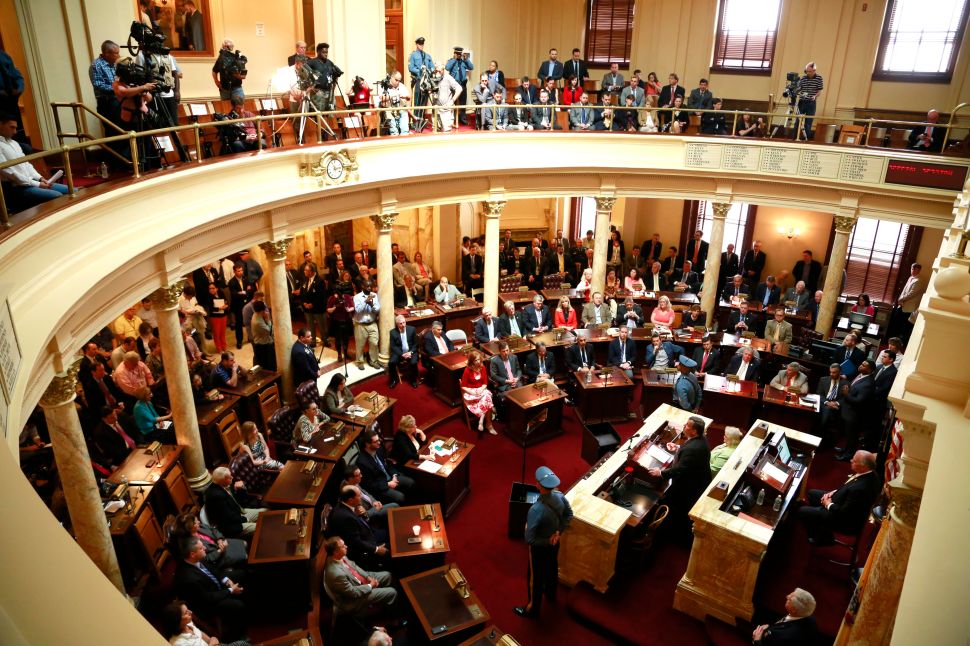