Phil Murphy has chosen former Assembly Speaker Sheila Oliver to join the Democratic ticket as the candidate for lieutenant governor, a source with knowledge of the selection process confirmed Tuesday.

Murphy will announce Oliver, a state assemblywoman from East Orange in Essex County, as his running mate Wednesday morning. Murphy’s campaign has scheduled a news conference in Newark to formally introduce his choice.

In Oliver, Murphy has picked a fixture of New Jersey politics with more than two decades of political experience and firsthand knowledge of how the state house operates. She has spent more than 12 years in the Legislature and became the first African American woman to lead the state Assembly in 2010, serving two terms as speaker. By contrast, Murphy is a former Goldman Sachs executive who has never held elected office but served as U.S. ambassador to Germany from 2009 to 2013.

Oliver, 65, was speaker during Gov. Chris Christie’s first term and was part of several projects with him and Senate President Steve Sweeney (D-Gloucester) to cut public workers’ benefits, merge several state universities and enable a huge boom in New Jersey’s tax breaks for corporations. But she was also a Christie foe, butting heads often with the governor on charter schools, vouchers, the millionaire’s tax, Planned Parenthood funding, gay marriage, increasing the minimum wage, and a range of other issues.

Oliver was an Essex County freeholder from 1996 to 1999 and an East Orange school board member from 1994 to 2000. She’s currently an administrator in Essex County. Just as she was elevated to the speakership as part of a deal between party bosses in the northern and southern parts of the state after Christie’s election in 2009, Oliver later lost the top Assembly post when some party bosses soured on her. After U.S. Sen. Frank Lautenberg’s death in 2013, she joined the Democratic primary in the race to replace him, ultimately losing to Sen. Cory Booker.

Her selection now marks a high-profile return to the statewide arena, and it was a nod by Murphy to some of his most prominent backers in the June 6 primary, namely Essex County Democratic Chairman LeRoy Jones, who had pushed hard for Oliver.

Other front runners for the lieutenant governor spot included Assemblywomen Shavonda Sumter (D-Passaic) and Marlene Caride (D-Bergen). Insiders told Observer previously that Murphy was seeking to bring diversity to his ticket. Some Democrats worry that New Jersey is in danger of erasing some of its diversity next year if the three leaders of the government are Murphy, Sweeney and Assemblyman Craig Coughlin (D-Middlesex), who appears to have enough support to oust Speaker Vincent Prieto (D-Hudson) next year. Coughlin, Murphy and Sweeney are all of Irish descent.

The selection of Oliver was first reported by Insider NJ. The Murphy campaign did not comment Tuesday morning.

Jeff Tittel, director of the New Jersey Sierra Club, has known Oliver for years and called her an “excellent candidate” in a statement released Tuesday morning.

“Oliver has a long history of being one of our strongest supporters in the Legislature when it comes to fighting for the environment as well as standing up for women’s issues,” Tittel said. “We think she’s a great choice for this role and will be a real asset to New Jersey.”

Assemblywoman Valerie Vainieri Huttle, who was also considered a candidate to be Murphy’s running mate, said Oliver was a “great pick” for Murphy’s ticket.

“She has a wealth of experience,” said Huttle (D-Bergen). “She has the wherewithal to step in if the governor leaves town. A tremendous resume. And I think she’s probably one of the most passionate, committed legislators that I’ve ever served with.”

Sen. Richard Codey, a former governor whose ouster as Senate president in 2009 helped elevate Oliver to the speakership, said he was happy for Oliver, Murphy and the Democratic Party

“She’s been a stalwart of the party for a long time. I look forward to working with her in every possible way,” said Codey (D-Essex). “We have a history, and it’s a good history.” 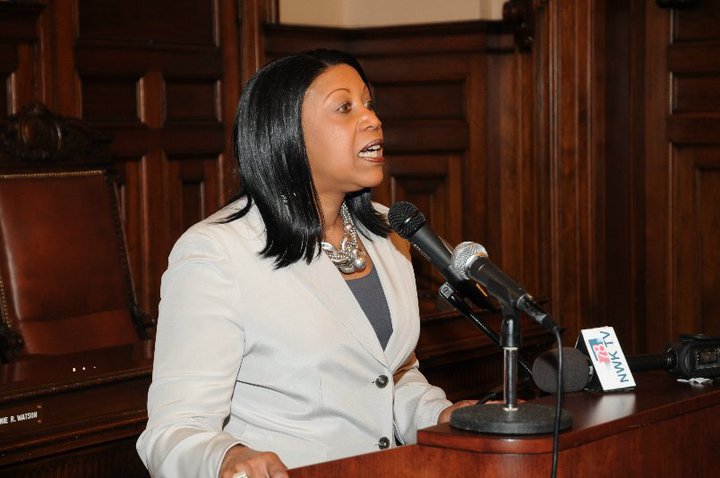