Some enjoyed your highly publicized visit to NASA’s Kennedy Space Center in Florida yesterday to call for a “renewal” in America’s space leadership. But your visit stirred some controversy when you were caught touching a piece of space hardware that was clearly marked “DO NOT TOUCH.” That’s a no-no especially for a part that is supposed to ensure astronaut safety on NASA’s only human space exploration vehicle.

Since you’ve been appointed the head of the re-established National Space Council after President Trump signed an executive order last Friday,  we put together a cheat sheet for you to avoid any future confusion and mishaps. Also, your speech in the Vehicle Assembly Building shows some gaps in your knowledge on how exactly NASA plans to move forward with human space exploration.

First off, where were you?

You were in the Operations and Checkout Building at NASA’s Kennedy Space Center. The historic facility was used to process Apollo astronauts before their missions and in-fact, it used to be called the Manned Spacecraft Operations Building. It includes sleeping quarters that was once used by Buzz Aldrin and Neil Armstrong before their mission to walk on the moon. In the years that followed, it was used to process Space Shuttle hardware as well as parts of the International Space Station.

So why are you there?

The Operations and Checkout building is currently hosting Lockheed Martin engineers as they assemble the Orion spacecraft–the vehicle that is supposed to fly humans around the moon and to Mars at some point. You are there to show that the Trump administration is interested in such feats and will somehow help make it happen. What they need is a clear directive and a whole lot of cash.

Yes, it’s a human crew capsule that will house 4 American astronauts on their arduous journey beyond low-Earth orbit. Low-Earth orbit is where the International Space Station is located and humans have not travelled beyond there since the final mission to the moon in 1972. The deep space-bound vehicle’s manufacturing was contracted to Lockheed Martin by NASA and has already undergone a testflight in December of 2014. The vehicle flown on that test flight was sitting right behind you during your speech at the VAB.

So what exactly was the thing you touched that you weren’t supposed to?

That would be the outer tile assembly that goes on the very top of the Orion spacecraft Crew Module. That’s the part of the spacecraft where astronauts will sit (and survive) during missions. On the outer tile assembly, inside the forward bay cover, heat shield tiles are attached to protect the vehicle from the extreme temperatures that occur during high-velocity spaceflight.

For example, the Columbia Space Shuttle disaster that resulted in the loss of the entire crew was caused by a loose piece of foam that struck the shuttle’s heat shield. This breach in the vehicle’s thermal protection caused the shuttle to disintegrate.

Again, the space hardware you took liberties with yesterday is an ACTUAL part of the spacecraft that is supposed to accomplish what you promised at Kennedy Space Center yesterday. It’s the only human spaceflight project NASA has in the works and the only way the agency has to get to Mars independently. The part you touched is one of the crucial components of that spacecraft that will ensure the astronaut’s safety during deep space missions. Please refrain from touching next time. 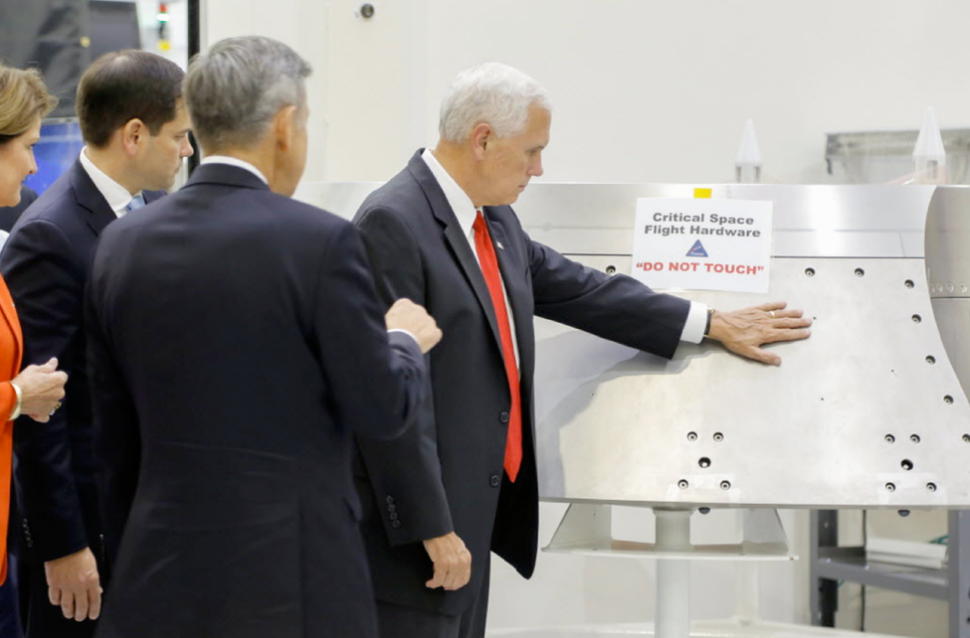