Neolution’s leaders think of themselves as scientists creating the biology of the future, bringing about the next step in human evolution. But we’ve seen its true face now—embodied in the purportedly 170-year-old P.T. Westmoreland—and we know what the Neolutionists really are. They’re vampires. They find people with unique genomes and draw their blood to “unlock” their secrets, which they then use in experiments to extend their lives.

This is what they did with Kendall Malone. And, we learn in this episode, what they did with the unfortunate child who came before Kendall. It’s why they are so desperately seeking Helena, to do the same with her unborn children. And it is what Rachel, for all of her protestations to the contrary, is doing with Kira.

Perhaps unsurprisingly, given her precocity and the chaos of her upbringing, once-sweet Kira has become a defiant proto-teenager. So she’s been tight-lipped with her family about her sessions with Rachel, who she thinks will help her discover the truth of her identity. Sarah and Mrs. S, though, aware that Rachel is an unstable megalomaniac, are appropriately troubled. Particularly when they discover that Kira’s been cutting herself in an attempt to see if she has Wolverine-style healing powers like Helena’s future kids. (Verdict: probably not.)

Sarah characteristically freaks out, but Mrs. S the veteran spy already has wheels in motion to get to the bottom of all of this: Neolution, Westmoreland, the whole deal. She’s tasked Scott and Hell Wizard (I just have to grin every time I type his name) with hacking away, and they give her a bio of Westmoreland that has him disappearing for good in 1898. There’s something of a suggestion that our current-day P.T. could be a charlatan who took his name, but instead they all seem pretty intent on discovering what he’s been up to all these intervening years.

Scott and HW also discover that Neolution has a bunch of patent-hoarding subsidiaries in Switzerland, and so Mrs. S calls in a utility player: Felix’s bio-sister Adele. I did not realize how much I had missed the silly lush until she reappeared on my screen. Before she was disbarred (much to Felix’s (and our) shock, not as a result of her drinking, but rather her embezzling), Adele was a corporate lawyer with a knack for following the money. So Siobhan sends her and Felix to Switzerland to see if they can unmask more of Neolution.

But it’s the last of Mrs. S’s discoveries that really drives this week’s story. Her spy network has told her that a former high-ranking Neolutionist has been involuntarily committed to a psych ward, and so, with Hell Wizard’s help, she formulates a complex plan to break in and get the defector to spill all of Westmoreland’s secrets.

It’s fun seeing Mrs. S’s impressive array of espionage skills put into practice, and even more enjoyable seeing her and Sarah pull off a con together. Presumably Siobhan was the one who trained Sarah, and when they actually work in concert like this what they can do together is pretty stunning. Once Sarah knows the play, and without missing a beat, she turns her very real grievance against her foster mom (“I’m sick of your bloody secrets”) into a perfect diversion that simultaneously creates a bond between Mrs. S and their mark, a psychologist with an estranged daughter. The whole thing is so beautifully seamless it’s nearly impossible to tell when real life ends and the con begins. (It’s also a great example of how smart and subtle the writing on this show is.)

Using the shrink’s credentials and some more spy tricks, they gain access to the locked psych ward. Inside, the former Neolutionist in question turns out to be Dr. Virginia Coady, the heinous torturer who headed up Project Castor. You know the male clones who were basically walking STDs? Coady spills some of her secrets: It was Susan Duncan who stashed her away in that ward after Castor fell apart, to make sure she didn’t infect Neolution with her own brand of science.

See, before Leda and Castor, before they found Kendall Malone and cloned her, Westmoreland, Susan, and Coady tried to unlock the similarly unique genome of a little boy. But the experiments began to deform his body and his mind. Susan wanted to stop, but Coady pushed on and created a monster.

The B and C plots of the episode basically serve to confirm Coady’s story. Cosima presses Mud about the “bear” in the woods, and later follows her to discover that deformed child, now grown into a violent man. And Susan, reunited with Ira, explains what she did to Coady and why: She’s dangerous and her science is unsound. But, Susan says, I still share the same goals, as I do with Westmoreland; it’s only the methods of getting there we disagree on. So resolved, she makes a deal with the old man. She’ll get full and exclusive access to Kira’s genetic material and will work on it for Neolution, as long as she can accept the fact that Rachel is now her boss.

But this arrangement may not last long: Coady fakes a psychotic break and grabs Sarah’s keycard, presumably to break out of there and go throw a wrench in the works. Who knows what she would do if she got her hands on Kira?

All these people vying for control of one young girl’s blood and genetic material, like the vampires that they are. And they’re all missing the point. Because there is something else going on here, something that seems deeper than blood.

Smack in the middle of the episode, while they’re preparing the next stage in their con game, Sarah and Mrs. S take a detour to the convent where Helena is hanging out, pregnant and writing her memoirs. Sarah confesses that she never quite related to the connection that Helena felt to her, the way she seemed linked to her even when they were far apart. But on the island, every time she passed out she heard Kira calling to her across the miles, and suddenly she understood. What’s really special about Kira isn’t in her genome. It is in the spooky and inexpressible connection she feels to all of her mother’s clones, a link that goes beyond anything purely biological. And so the thing Neolution covets the most is the one thing it is completely blind to.

But Sarah’s not. And she’s coming for them. 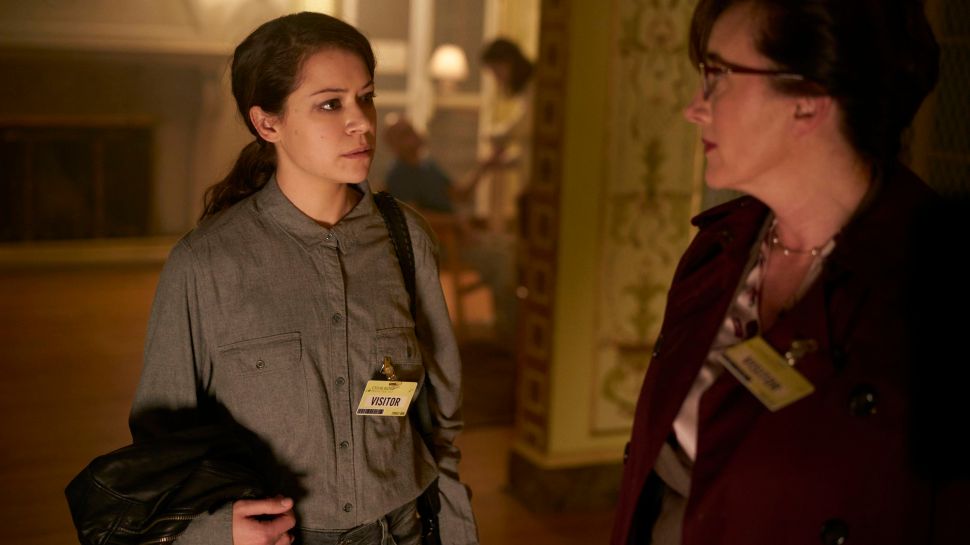