As a thriller, Orphan Black is highly concerned with questions of trust. Whom to trust and when, what makes others trustworthy and how to secure others’ trust, how trust makes you act and how it makes you vulnerable, and so on. And one of the things that gives the show such thematic depth is how readily these social issues map onto its biological ones. If I and my genes were created in a lab, can I trust my body? Myself? My future?

Looked at another way, Orphan Black takes a key question of trust—To whom do I give access to my true self?—and renders it quite literal. ‘Who loves me?’ ‘Who knows me?’ ‘Who influences me?’ These shade over very quickly into ‘Who owns me?’

As we are reminded at the beginning of this week’s episode, Neolution believes that it owns the Leda clones, or at least their biological material. There is a copyright written into their very genetic code, Cosima discovers when she sequences it. This claim is clearly not legally enforceable (Rachel admitted as much a couple of weeks ago when she told Sarah that any discoveries they make while examining Kira “will of course be proprietary. But she isn’t. She’s yours.”), but Neolution is still determined to maintain control. Originally secretively, and, now that the clones have become self-aware, through manipulation and leverage. Ali, via her sense of responsibility and guilt. Sarah, through her loyalty to her family. And Cosima, through her intellect.

So it is that P.T. Westmoreland, by flattering her intelligence, is able to get Cos to stay at Revival, in the belly of the beast. Giving her access to the science of longevity, making her a part of their project, if kept somewhat in the dark—it may help their progress, but its real purpose is to keep her under their thumb.

But Cosima’s always smarter than everyone in the room. She knows what they’re up to, knows they’re using her by and for her brain. And like her sisters, she’s a fighter. She defies, she resists—as Delphine told her to when she first discovered the copyright claim in her DNA. For all of the sisters, defiance involves relying on the things that can’t be read in their genes. The bond they share. Kira’s psychic connection to them all. And for Cos, resistance involves going against her own nature, depending on the most counter-intellectual thing there is: a leap of faith.

There is no reason for Cosima (and little reason for us) to trust Delphine. Her actions, by and large, make little sense unless she’s playing both sides. She pretended to be dead for months. She lies almost every time she opens her mouth. She betrays Cos at least twice just in this episode. And yet she asks Cosima to trust her anyway, to believe in the love between them, to trust that everything that she is doing is to protect her. And Cosima does so, in what amounts to not just an act of love but a profound act of resistance. She makes the only chess move Neolution can’t possibly anticipate. She puts her faith in something that, even to her big brain, can make no sense at all.

Delphine has returned from her sample-collecting trip to Sardinia just in time to be invited to a celebratory dinner being held by Westmoreland. Celebrating what he doesn’t say, but she and Cos puzzle at least part of it out. Based on her examination of little Aisha and the tooth left behind by the Moreau-beast in the woods, Cosima determines that the Neos are studying a gene called Lin-28A, which has something to do with cell regeneration.

Using the name of the gene as a password, Cosima finagles herself an invite to the Great Dinner Party of Exposition. (Never missing a chance to render a metaphor literal, the show has Rachel declare that Cos wanted “a seat at the table.”) Old-fashioned Westmoreland demands that they dress for dinner, so Cosima (“frock that!”) elects to wear a tuxedo, in what everyone mistakes for her major act of defiance. In truth, she’s just getting started.

In attendance: Westmoreland, who orchestrates everything with waves of his hands and puts on an air of bemused tolerance, though he reacts to Cosima’s insubordination with veiled threats against her adoptive family. Susan Duncan, who’s in a conflicted place: She knows Rachel is unhinged and that P.T. is spinning out of control. But she wants to ensure that the science continues, to guarantee her legacy, and she believes she can subtly steer Westmoreland. Ira, along for the ride but very skeptical of Susan’s plan, and meanwhile starting to glitch. Rachel, who makes a grand late entrance and treats everyone like pawns in her game. Delphine, who spends the entire time agape—whether for real or for show it is not clear—at everything that Cosima says and does. And Cosima herself, who takes the opportunity to lay out everything she is just now puzzling out about the Neolutionist project.

With the help of everyone else around the table, she puts the pieces together. The beast in the woods is named Yannis; he was a child Westmoreland discovered in a Latvian orphanage, with a unique ability to heal. They did a series of experiments on him in an attempt to isolate and use his special gene mutation, experiments that failed and made him into the violent creature he is today, lurking in the woods and menacing the villagers.

Susan disassociated herself from those experiments, but she did insert the gene in question into the Leda DNA, hoping that it would give the clones a special healing factor. No dice. Then Kira came along (unexpectedly, since the clones were supposed to be sterile), and she did have the ability to heal. So Rachel, having finally gotten her hands on the child, took the gene and experimented on Aisha with it, isolating it to become their promised fountain of youth.

Everyone is very impressed with Cosima’s sleuthing, but Westmoreland has had enough, insisting that dinner is over and also that Delphine can now wing off to Geneva (where she is headed, unbeknownst to him, to meet up with Felix and Adele). Good thing the meal’s done, since Yannis, who has been getting more aggressive, has wounded one Revivalite and killed another, has now broken into the house. Cosima and Delphine share their goodbye and Delphine asks her to take the aforementioned leap. Love me, trust me, but pretend to the Neos that they are successfully dividing us.

Armed with this new charge of resistance, Cos goes off to hide with Ira and Susan, who reveals the last part of the plan: They are going to harvest Kira’s eggs and implant clones in 1,300 surrogates. Horrified, Cosima finds Westmoreland and confronts him: You’re not 170 years old, you’re just a sick man who is terrified of dying. You’re desperate, so you’re putting all of your eggs in the Lin-28A basket. But that’s not how genes work. They interact with each other—it’s never just one gene. So in the end you’re not even a very good scientist. All you’ve done is torture innocent children for the possibility of a few more years of life.

Westmoreland strikes back by offering Cos his gun and telling her, if she’s so pure, she should do the right thing and put poor Yannis (who has crawled back to the home he knows, his prison in the basement) out of his misery. In tears, she points the gun, then lowers it, and speaks the closest thing Orphan Black will ever have to a thesis statement: You gave me life; I know you can take that away. You can’t take away my humanity.

So Westmoreland shoots the cowering Yannis himself. Then, realizing he can’t confine Cosima by threats and manipulations alone, he swings the cage door shut. 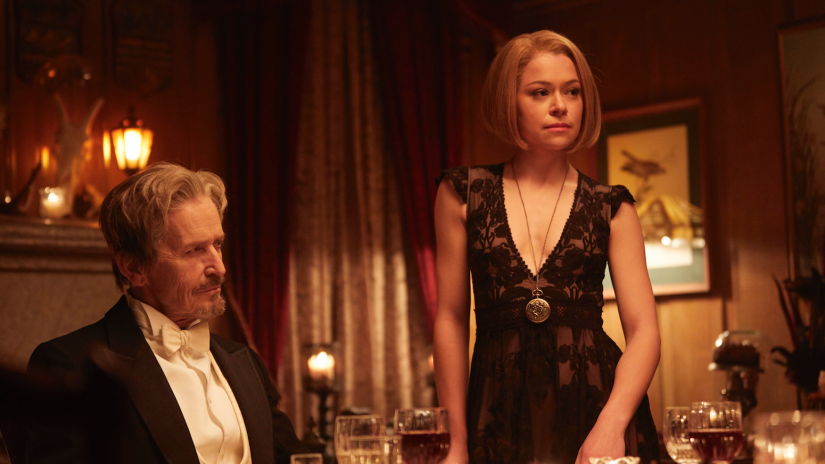